1976 Chinese Zodiac – The Year of the Dragon 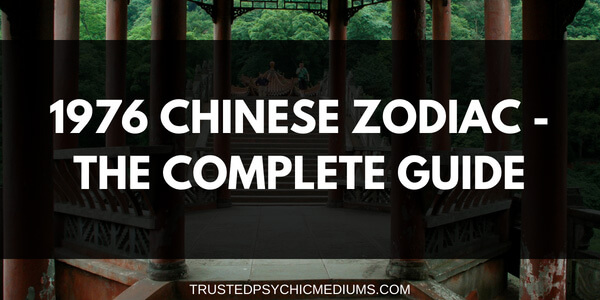 Personality Type of the 1976 Chinese Zodiac

Your Chinese zodiac sign is the Dragon if your birth year is 1976.

Force and power are just some of the things that are attributed to the Dragon.

There is an undeniable air of exoticness and mystery with Dragon people, especially with Dragon women who exude passion and sensuality.

Indeed, Dragon people are lustful and are very popular with the opposite sex.

In Chinese culture, the Dragon year is the most desirable year. The Dragon possesses magical powers and is capable of reaching the highest heights and plunging into the depths of the oceans.

Dragon people are healthy and full of vitality. They are shrewd, artistic, and intuitive, with luck always on their side.

However, Dragon people can also plunge low when it comes to their emotions. They can be impulsive, stubborn, and irritable for even the smallest reasons.

They can be challenging to get close to, and a relationship that does not satisfy them can lead to a string of other unsatisfying relationships.

Dragon people often believe that they are invincible, so they must be careful of having and giving too much.

Because of their uncommon strength, they can usually do more harm than good to themselves and scorch their own wings!

Dragon people are accommodating and flexible, and they can easily fit in with anything that’s happening around them. But only if it suits them.

They are very determined and don’t like it when they’re dominated by other people.

Even if they are very friendly and agreeable, Dragon people are known to be dangerous and ferocious.

They are somewhat quick-tempered. When they get angry, people are really going to get it.

Dragon people also can be hypocritical when things are not up to their expectations. This is because they are perfectionists and idealists.

Their tendency is to demand so much when they give so much.

They are very energetic to the point of being impulsive. Their words also overrun their thoughts. They let their hearts run away with their heads.

On an intellectual level, Dragon people are sharp, bright, and clever. But sometimes they will also ignore logic and just listen to their own hunches.

Luckily for them, they have very powerful intuition, and this helps them stay out of trouble most of the time.

Whenever there’s a confrontation, Dragon people can sometimes get the wrong idea about the situation.

They are also not very skilled at bailing themselves out of difficulties.

Interestingly, no matter what hardships or challenges Dragon people may encounter, they will always land on their feet. They will be successful whichever direction they go.

Dragon people often devote themselves to a good cause, and they will usually see it through until the end.

The only bad thing about this is that even if they are involved with a not so honorable cause, they can still be successful with it. Dragon people just cannot help but win!

They are competitive, outgoing, and righteous, which is why they expect a lot from people.

Their incredible energy allows them to offer a lot in return as well. However, their overzealousness and dictatorial tendencies can make others feel fearful of them.

They just don’t like putting up with anything that’s less than perfect, and this is why they are the way they are.

People born in 1976 in the year of the Dragon have fire as their element.

Fire Dragons are leaders who don’t rely on anyone. They try not to fail because they always enter something in the position of helping, advising, and instructing others.

This type of Dragon is the most generous and cheerful of all. They love to compete the most because of their inexhaustible energy and aggressiveness.

They have so much to give and offer to everyone.

The problem is that Fire Dragons are also very powerful and superior, causing others to feel afraid or apprehensive around them.

They are very good and capable leaders, but they often want to be treated like a messiah of some sort.

The fire element makes them unusually determined and gives them their dictatorial streak. But they are very open and friendly people who are always impartial and honest.

They give fair criticism and can effortlessly lead crowds of people by their bright personalities. Fire Dragons are often driven by their insatiable personal ambitions.

They are incompetent and quick-tempered and are unable to reconcile with other people’s imperfections.

They also have a tendency to generalize. They are always in a hurry to jump to conclusions and label people.

Best Love Matches for the 1976 Zodiac

The best love match for the Dragon is the Rat.

They seem to be the exact opposite of each other in terms of size and personality. But in Chinese astrology, they share a great compatibility quotient as far as love and relationships are concerned.

They share an extroverted nature that makes them happy to be with people.

The Dragon and the Rat thrive on the verbal exchanges and social interactions that their circle of friends and social networks can offer.

They both possess an incredible amount of energy, and they can usually be found happily engaged in different activities at the same time.

While the Dragon puts more emphasis on creativity and self-expression, the Rat is game for anything, as long as it’s new and interesting.

But with all their love for socializing, they are not just social butterflies.

The Dragon is drawn to projects that have a solid element of a challenge, and the Rat can quickly absorb the basics of any task.

Together, they have an energetic approach to life and can add more substance and spirit to even the most mundane activities and most common ideas.

The Dragon will help the Rat in focusing their scattered ideas and make sure that they translate into action.

The Rat can articulate the big picture for the Dragon who is usually driven by ego and impulse.

These two make a great team that will keep each other interested and help one another accept new ways of looking at things.

The compatibility quotient of the Dragon and the Rat is also greatly increased when they are professional or businesses partners as well.

The Dragon and the Monkey also make a great pair that will be very happy in love and romance.

They are brought together by their very active personalities. They both like to be in the thick of the ups and downs of life.

The Dragon and the Monkey have a get up and go attitude in life. Together, they will keep each other stimulated by being involved in different experiences and pursuits.

They have a common love of socializing. They are in their element when they are surrounded by a large group of people, which is not surprising because of their naturally charismatic personalities.

In the search for their perfect match, Dragon people will sometimes find themselves hesitant in moving forward to making a commitment.

They will not easily give up their freedom and independence, so they need someone who will be tough and thick-skinned.

But once they decide to commit, they will commit to the person they love for life.

Some Dragon people choose to be single because they are happier being single. They are always surrounded by people who love them, anyway, and will never lack love in their lives.

Dragon people are excellent conversationalists. They are warmhearted and generous to the people they love.

Their interpersonal relationships are very important to them and they consider them an essential part of their health and happiness.

Wealth and Fortune for the 1976 Chinese Zodiac

Dragon people have some of the greatest, most amazing, and most original ideas.

These ideas may be ridiculous and farfetched. But one day they can be the latest trend, the most brilliant innovation, and the new reality.

Dragon people will not stop churning them out, and everyone should be taking notes because they can strike a gold mine with one of them.

They are blessed with good luck and win more often than not. They are usually given, or they inherit significant financial rewards. Other times they accidentally find them.

Overall, Dragon people are great money magnets. They were born to rise to the top and stay at the top.

They are also known to possess the Midas Touch. Everything that they are involved in will always yield good or prosperous results.

They have a knack for attracting success, wealth, abundance, and prosperity.

It is believed that the Year of the Dragon is excellent for business and other forms of money-making schemes.

The Chinese believe that the Dragon leaves wealth, abundance, and prosperity in his path.

Hence, it’s the Dragon that is always present in street parades during the Chinese New Year because it brings the Four Benedictions of the East, which are wealth, virtue, harmony, and long life.

The Dragon’s corresponding star sign in the Western Zodiac is Aries. Chen is the yearly Dragon branch in the Earthly Branch.

When it comes to yin and yang, the Dragon is yang.

It is believed that the lucky herbs for Dragon people are larkspur and bleeding heart.

The lucky directions for the Dragon are believed to be the west, north, and northwest.

Spring is the lucky season, and the lucky colors are gold and silver.

It is believed that black, purple, green, and red are the colors that Dragon people should avoid.

Amethyst is the lucky gemstone.

3 Unusual Facts About the 1976 Chinese Zodiac

In Chinese mythology, the Dragon is also the god in charge of rain.

In Chinese history, starting from the Song dynasty, almost every village had a Dragon King Temple. People would pray and meditate here for rain for their crops and good weather when needed.

After thousands of years, the Dragon became the most powerful symbol of Chinese culture.

Dragon people are very hardworking and intelligent. When they set their sights on something, they will not stop until they have it in their hands.

When they have a dream they want so bad to come true, they will do everything in their power to make them manifest in real life.

They are very friendly, approachable, and well-liked by people.

Their easygoing and laidback nature makes them adaptable, but this often makes them look fickle or unpredictable.

Since they are known to be very friendly, Dragon people usually wear their hearts on their sleeves. They are very honest and open with their feelings.

Because they are so quick and ready to trust, they are often misled and tricked by others.

Dragon people are usually lucky when it comes to love and romance, but they need to be careful with their fiery tempers.

They are very talented, intelligent, and confident. Almost everything they try turns out successful or profitable.

Even when they fail, they are very seldom blamed because their enthusiasm and inspiration evoke admiration and love.

However, their opinion of other people is not always the most positive or the most flattering.

Dragon people can lack patience and be intolerant of other people’s opinions, especially when they are not the same with theirs.

They can be eccentric and passionate, but they always stand by what they believe in.

They also have strong personalities that are driven by their desire to inspire others and to create positive change for the world.

They focus on making their dreams come true and in receiving recognition for their hard work.

The Dragon is the bringer of good luck and having a Dragon person in your life will surely create big luck for you.