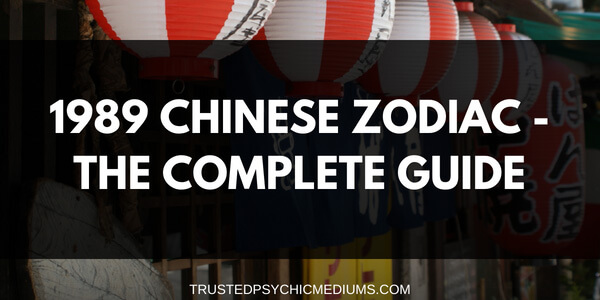 Personality Type of the 1989 Chinese Zodiac

If you were born in 1989, your Chinese zodiac sign is the Snake.

People with the 1989 Chinese zodiac are intelligent and highly analytical. They also have no problems exercising self-control.

It may look like they’re a little slow to speak, but this does not mean that they’re also slow to think and act.

They often ponder or reflect on a certain topic, issue, or situation before making any plans or decisions or saying anything about it.

They speak with great care, and they choose their words. But if it’s required of them, they can also be very swift about it.

The Snake will remove all the obstacles in their path to accomplish their goals. People with the 1989 Chinese zodiac Snake also like to spend a lot of quiet time by themselves.

They can be the busiest people in the planet. But when the day is done, nothing sounds better than relaxing on the couch with a glass of wine and listening to some jazz.

Plenty of Snake people can be found at home with their noses in their books or binge watching their favorite television program.

They like to do their own work, but they don’t have any problems delegating, either.

The Snake loves puzzles and everything else that makes them think. They are also the type of people who will stop what they’re doing to listen to the chirping of the birds, watch a rainbow, or make a baby giggle.

People with the 1989 Chinese zodiac often stop to smell the roses and show their appreciation of the beauty around them.

The Snake is also able to discover beauty in even the most unusual places.

In the workplace, the Snake is very organized, creative, and efficient. They can work independently and accomplish their tasks with minimum fuss.

But the problem with the Snake is that they can get bored once they put a system in place and will want to move onto the next task right away.

When it comes to relationships, the Snake is charming and seductive.

They know they’re attractive, and they have this enigmatic way of getting exactly what they want. They plan the first move and think about it well before it happens.

But the Snake does not like sharing their thoughts and feelings, so they often get jealous even over the littlest things.

Because of this, they are best paired with people who are fiercely loyal and very perceptive.

People with the 1989 Chinese zodiac Snake also have the earth element.

The Earth Snake is not someone that people can easily ignore. They have a powerful and charismatic presence that has been described as beguiling or bewitching.

The Earth Snake has a penetrating eye and pays close attention to anything or anyone they want to conquer. Which is why they are a master in the art of seduction.

They are calm, understanding, philosophical, and wise. They can go along with everything, but sometimes, they also have a tendency to be fickle.

Because the Earth Snake is talented and alluring, success and fame come easily to them.

However, they are also known to be traitorous people and will not think twice about being disloyal to someone to save themselves.

They delight in intrigue. Their exacting nature will also never forgive or forget so easily. They can be very lazy and self-indulgent as well.

The Earth Snake is secretive and enigmatic. They are subtle, discreet, and elusive.

They can be counted on to spearhead a project and carry it through to the end. It may look like they make hasty decisions, but they have already deliberated them in their minds over and over.

The Earth Snake will fight for anything they believe in and will not allow anything to stand in their way.

They are at ease in all kinds of situations, and they demonstrate impressive discipline.

This is part of the reason why Earth Snakes achieve great heights and receive honors in their careers. If there’s a fatal flaw in their character, it’s their tendency to exaggerate.

When people are extra nice to the Earth Snake, they will start to be possessive with them in a bizarre way, and it will be annoying instead of endearing.

Because of their serpentine nature, the Earth Snake will coil and cling to the point where they will start to suffocate the object of their affection.

People with the 1989 Chinese zodiac are notoriously attractive and like to project the best image of themselves.

Whether in their physical appearance or in their current circumstances, they simply have a magical knack for making the best out of the mediocre.

The Earth Snake is spontaneous, reliable, and disciplined. They form accurate opinions of others.

They can communicate and function effectively with a group, but they can effortlessly take charge during moments of panic or confusion.

They tend to be frugal and conservative, and they know their limits. They are careful not to overextend themselves.

Best Love Matches for the 1989 Zodiac

People with the 1989 Chinese zodiac make the best love match for the Dragon.

Both signs are creatures of the reptile world, and they can be expected to have common and compatible traits.

The Snake and the Dragon are confident and self-assured, and they both have a discriminating eye for the beautiful things in life. Their sense of self-pride is another thing they have in common.

They know their place in the world. But between the two, the Dragon is more flamboyant, and the Snake is more mysterious.

They are aware of their interests and priorities in life. They will not be easily persuaded into doing something that they don’t want.

They are mentally strong enough to be responsible for their relationship, and they are proud to be in love with each other.

Once they make the decision to be together, they will let little come in their way. The Snake and the Dragon will go all out in romancing each other.

They are well-suited to complement each other in romantic relationships and in business as well.

The Snake is intuitive, and the Dragon is enterprising. This combination of personality traits makes them an excellent pair.

There can be a beneficial division of labor between them. They will have clear duties and responsibilities that will avoid confusion or conflict.

This love match also has a high level of physical attraction. Very few people can resist the personal charisma of the Dragon, and the Snake’s allure is naturally mysterious and subtle.

When they fall in love, it will be mind-blowing and out of this world! The Snake and the Rooster in love will also make a wonderful match.

They share a similar view on life. They will not waste time playing mind games with each other.

They will make sure that all their energies are expended on one activity, working in harmony to achieve their goals together.

The Rooster and the Snake admire each other very much because of their many lovable traits. While they may not be perfect lovers, they will work hard to live up to the other’s expectations.

The Rooster’s perfectionist way of doing things will work well with the Snake. The Snake will understand why precision is important for their Rooster lover.

Their grounded natures will positively influence their relationship. They will be more inclined to commit to a serious relationship and settle down together.

The Snake understands the value of having a happy and loving home. This is something that they dream about and strive so much to have.

When they are paired with the Rooster, they will be looking in the same direction. They will do everything in their power to build a home that is safe and secure.

Just like the Rooster, the Snake has a liking for material things. This infers that they will enjoy going out together on great dates and have fun buying each other gifts that they know the other person will love.

The Snake loves to dress to impress, and they will always leave the Rooster impressed and captivated.

The mutual admiration that they share will also have a positive effect on their sexuality. This is because they will keep each other concentrated on their relationship.

Therefore, the chances of them straying or cheating will be very minimal.

Wealth and Fortune for the 1989 Chinese Zodiac

People with the 1989 Chinese zodiac are born thinkers who excel in finding solutions to complex problems.

They are shrewd in business. They bide their time in making a deal and strike like lightning.

The Snake is usually financially successful and lucky with money. Their fortune depends on their judgment in financial affairs and on their intuition in business dealings.

They are clever and smart, and they take their time in formulating their ideas and opinions. Even when they are in their lazy moods, their minds are still hard at work.

The Snake is a bit tight when it comes to lending money, but their sympathy for others often leads them to offer help.

In money matters, the Snake often has good luck. They simply don’t have to worry about money!

They will always be able to get money whenever they need it. They will be able to spot opportunities and use their creative genius to earn from them.

Once they have acquired money, they can become a little stingy. This is not because of greed, though.

They just know the value of hard work and the sweet taste of financial rewards. They will not squander their money away because they know just how hard they’ve worked for it.

But their generous hearts will still find themselves lending money to people and making sacrifices for others.

The lucky direction for the Snake is the south and the southeast. Their season is summer, and their polarity is yin.

3 Unusual Facts About the 1989 Chinese Zodiac

In Japan, those who wish to pay a woman a compliment about her beauty can do so by saying what a real snake she is. It’s a pleasantry that will most likely be misinterpreted in other countries, especially in the West.

The destiny of those born under this Chinese zodiac sign is so sensitive to the climate. The almanac warns Snake people born on a stormy day that they will face danger all their lives.

The wise and mysterious Snake is the sixth sign of the Chinese zodiac.

People with the 1989 Chinese zodiac are physically striking and often have a wonderful sense of personal style.

They are independent and very private people who follow their own path, no matter what other people may think.

They are very sophisticated and have a love for the best food, fashion, art, music, films, and everything else that represents taste and luxury.

Money is not an issue, and they can be quite generous with theirs if they find something special about you.

Snake people are usually psychic, and they enjoy anything philosophical and spiritual.

They may also appear slow and relaxed, but this sign is actually very analytical. They tend to be high-strung and anxious.

In love, the Snake can be very demanding and possessive. They have high standards for themselves and their partner.

They can also be very suspicious of loved ones and people in general, but this will not always be obvious. They often keep secrets and are usually quite careful about what they say.

The Snake does not easily release anything they have chosen to cling to, and they are not above seeking revenge.

They will plot, plan, and wait for the right opportunity, so don’t ever break your promises to a Snake!