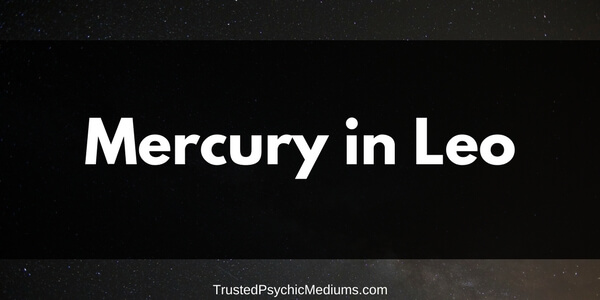 Mercury in Leo affects traits concerning your communication style. Your sign is one of the natural born leaders of the Zodiac, and Mercury serves as your soapbox.

You gain extra confidence and eloquence when Mercury is in your Sign. When you speak, others listen.

Mercury champions the righteous ruler in you, Leo. You are a fair leader, and your peers respect your methods.

Leos, especially combined with Mercury, make decisions that are best for the greater good. You are confident, self-aware, and sensitive to the needs of the many.

People love Leos with Mercury in their Sign—they are archetypal imaginative, intoxicating, and soulful leader.

A Leo never leads with fear or pain, but with common sense and kindness. You hold yourself to a very high standard of conduct. You make sure to present yourself in a stately manner.

Mercury in Leo Women encourages rational thinking to accompany your visions of grandeur. You usually know how to sell your product, sight unseen.

You could sell water to the ocean. Mercury serves to strengthen your voice.

You take pride very seriously, being a Lion. Mercury affects how you communicate with friends and family. The people closest to you may understand that you like to talk a big game.

Be aware that you don’t say something you cannot back up. While Mercury in Retrograde may slow you down, the rest of the time, you are a bit quick to speak up.

Mothers and maternal figures in your life will resonate through Mercury’s influence. Mercury wants to see you name your needs and wants aloud, and have faith that you will be happy, eventually.

Mercury tempers Lion’s fanatic craving for power and status. Mercury in Leo favors self-expression and acceptance, over that of others.

Even so, you feel intelligent enough to hold anyone’s interest and stunning enough to catch their heart, as well. No one has ever accused you of being too humble.

A Man with Mercury in Leo can easily deliver a speech, write a song, or compel others through his writing. He is, no doubt, the type to promote new ideas—whether as a corporate CEO or a volunteer asking for petition signatures.

His confidence can come across as cockiness if he is not careful. This is especially true when Mercury is in Retrograde.

The four times of year that this happens, he will feel like he is constantly saying the wrong things.

Mercury in Retrograde will seem to throw everyone’s plans in reverse, but take comfort in the fact that soon things will be moving smoothly, again.

Mercury and Leo in Love

The fire in Leo’s heart and Mercury’s warmth draw others closer to you. Leo never has trouble speaking up about their needs, but the emotional needs brought up by Mercury may surprise you.

Fortunately for you, Mercury makes your communication with others easier—which means you are apt to do it more often.

Beware of negativity when Mercury goes into Retrograde. Keep lines of communication open with those closest to you.

Be aware that these Retrograde periods are not the time to make big speeches, try to win a major argument, or pursue your other grandiose plans.

Combined, Mercury and Leo cannot be ignored. Your love interest will know who you are. Make sure that you really want to be known as the person you are telling the world you are.

Leo loves the freedom to shake things up down, and sometimes regret promises.

Your best prospects for love lie in supportive Cancer and fiery Aries, with Mercury. Cancer with Mercury will be able to say the words you need to hear.

You will benefit from finding a partner in a Cancer. They want to make everywhere feel like home. They are the soothing human equivalent to chicken noodle soup.

Aries, with Mercury, create an incubator for a unique bond. The two of you will share an ambitious drive.

Often, because you are both Fire Signs, you will get along immediately. The intercourse is also just as hot as you can imagine between this pairing.

Your worst prospects for love lie in the critical eye of the Virgo with Mercury or the Pisces with Mercury. Mercury in Virgo only adds fuel to the fire of criticism.

While meaning well, the oppressive Virgo will burn you out before you even get going.

The Pisces may allow you more personal space, but they may also leave you wanting. Mercury in the Sign of Pisces signifies that one or more major decision(s) is/are still up in the air.

Dates for Mercury in Leo

Take special care of your communications during times of Mercury in Retrograde.

Mercury will be in Retrograde 4 times in 2017. These periods include January 1st-9th, April 9th-May 3rd, August 13th-September 5th, and December 3rd-23rd.

These times should all be used as times of reflection, planning, and personal preparations for the year ahead.

For the rest of the year, though, Mercury compels you to seek artistic ways to express your feelings.

You have a dramatic side that your Leo traits may dominate, but the arts may free up. Use your intellect and humor to impact others—not isolate them.

Mercury in Leo men can lead to boasting, and the telling and re-telling of ‘old fishing stories’. Leo Men feel at their most confident when Mercury is in their Sign.

Mercury in Leo Men can be intoxicating, and these men certainly know how to turn on the charm. This is the time when a Man with a Leo Moon might propose!

Use periods of Retrograde to prepare. Change is coming your way!

The possibilities that arise thanks to Mercury in Leo cannot be under-estimated.

In actual fact, you should really become aware of what it may mean for you as soon as possible to then allow you to identify the opportunities that this combination is presenting to you.

Furthermore, by looking at facts connected to this combination, you will also feel a sense of excitement as to what may be awaiting you.

1. You feel a surge in confidence.

One of the first things that you will experience when Mercury enters Leo is that there is a real surge in your confidence levels.

This is something that will become loud and clear to others as you are going to walk taller and with a stronger stride than before.

2. You have a habit of making the correct decisions.

Another thing that is important is that you have a tendency to make the correct decisions.

Not only that, but you have the remarkable ability to go ahead and come to the right conclusion that is for the greater good of everyone. Thanks to this ability, people turn to you as their leader.

3. You are sensitive to what others require.

One thing that people cannot say is that you are all about your own self. Instead, it is clear that this planet helps you to become even more sensitive to what others are requiring than you were before.

You just seem to have an ability to identify issues or concerns and are then able to address them as quickly as possible.

If you are a leader in any way, then you are often viewed as being very fair in your approach. You are certainly not a dictator or seeking to simply push your own agenda.

People feel that they are able to come to you and get solutions to their problems rather than just being ignored.

5. You are a rational thinker.

A woman with this combination is going to prove to be a rational thinker, and even though they may have big ideas, they are not too fanciful or outlandish that they are outside of the realms of possibility.

Instead, they can think big, but know that what they are dreaming of is going to be possible even though it will require a significant amount of work.

You will also find that Mercury is going to install an even greater sense of pride inside of you, and that does mean that you may talk a rather big game.

However, those closest to you will be aware of this, so it will not then damage any relationships.

7. You are great at promoting ideas.

A man with this combination is going to be rather impressive when it comes to promoting ideas. However, you need to be careful that confidence does not roll over into arrogance.

Mercury is certainly going to be a powerful force when it does indeed venture into this particular star sign.

However, it will not be something to fear as it will be there to really help you and guide you through life, but only if you allow it to happen.

Leos keep it classy. You hold yourselves in a noble fashion—even when cracking jokes and try not to make fun of anyone.

You will not roast a friend, but instead, use higher forms of humor to show off your wit. With the Sun Sign of Leo and the Sun’s fire, you warm the hearts of all you encounter.

You radiate love—even to strangers—and you are known for your comedic timing and hilarious one-liners. People naturally gravitate towards you.

Use your intellect and comic gifts to help others. Lead Storytime at your local children’s library. Visit with hospice patients, who do not have family near them. You are a natural storyteller.

Examples of famous Leo Storytellers are JK Rowling and Robin Williams. These two are household names and Hollywood legends, simply because of how well they can spin a yarn.

Williams was known to improvise many of his lines from famous movies. Rowling and Williams’s art bears the signature of Mercurial Leos.

Others are going to follow you, for better or for worse. Be aware of the influence you have and compare it to the legacy you hope to leave behind. Inspire those around you to tell their own, honest stories.

Our literature and movie industries are flooded with remakes, whitewashes, and flops. The more creative writers and leading Leos to choose from, the better the selections will be.

Representation of minorities and stories about women and people of color are becoming more popular.

There is quite a demand in the world for those with your skill set. Who are you going to lead? What cause will you labor under? Knowing your Leo Moon will help you understand your emotional needs in these areas.

Analyze your level of fulfillment in your job. Is there upward mobility at this job, for you? Would you be satisfied by reaching the highest pay grade this company had to offer?

Model yourself after leaders who have taught you valuable life lessons. Pick those who have conquered adversity with style.

A Question for You, Dear Leo:

Leo, which social and/or cultural icon has influenced your leadership style the most?