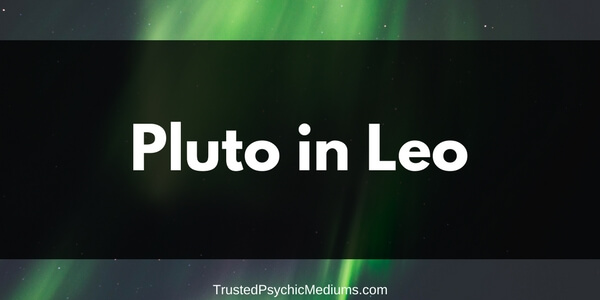 Pluto was in Leo between the years 1939 and 1958. While I would venture that these years weren’t quite as consistently terrible as the period directly before, when Pluto was in Cancer, it does give Cancer a pretty powerful run for its money. During this period, a range of oppressive dictators came into power, crippling efforts for freedom at every turn. While Hitler and Mussolini were of the previous period, the Second World War broke out as Pluto entered Leo, and the Cold War lasted throughout the rest of this phase.

The outgoing, masculine nature of the sign Leo characterized the personalities of leaders at this time. The political turmoil of the Cold War has been attributed to a kind of political version of frustrated masculine seductiveness, where proving oneself as “the best” became more important than anything else. People born during this time tended to be highly focussed on control, success, and prestige.

Leo is a sign that desires power and control over others. No sign could be more appropriate for the great age of dictatorships, where world leaders vied for control over increasingly unhappy populations. It should not be forgotten that Mussolini, one of these dictators, was also born while the Sun was in Leo.

Although, of course, most people during this time did not turn into political dictators, the overall zeitgeist was one where control was highly prized. This can be seen even in more daily operations, such as the creation of new, rigid gender roles for men and women, and the continuing racial segregation movement that spread across the West. These features started with the desire for stability and the hardening of borders that characterized the years of Cancer, but Leo solidified them and made them an immutable part of culture.

At the same time, this was a great age of suppressed anger. One need only read the works of poets of these times to see the rage that frothed right underneath the surface of rigid control. It was in these years that Allen Ginsberg wrote of how he “saw the best minds of my generation consumed by madness, starving hysterical naked, dragging themselves through the negro streets at dawn looking for an angry fix.” While culture became more and more rigid, the subculture became angrier and angrier, and more and more ready to lash out.

Traits of people born while Pluto was in Leo include a confident, outspoken attitude and demeanor, and a desire for power, autonomy, and control. Obviously most people born under this sign ended up being well-adjusted and dealing with these desires in relatively healthy ways, or else the world would have fallen apart… but there was a sizable minority who had highly negative understandings of the world that could not be effectively integrated into society as a whole.

This is why, even after the end of the Second World War, fascist and Nazi apologists remained vocal, both in Europe and in the Americas. Too many people influenced by the characteristics of Leo desired the kind of power and control that the Nazis promised for them to slip out of sight entirely.

Of course, most people did not support the Nazis, nor did most people see their view for the future as the “right” one. Far more people sought control and power in far less destructive but equally telling ways. Leo’s power doesn’t make everyone a fascist, but it does make everyone want to be right.

Women during this period were forced firmly back into the boxes that they had been forced out of no less violently in 1914. This was the height of traditional gender roles, and the idea of the nuclear family was not only born, but quickly became the gold standard for family life.

While Cancer was in place, women wanted structure to feel comfortable in their home. However, Leo women wanted some power back. Some women resented being forced into the home after participating in the workforce during the war. Others suffered the ill effects of many men’s post-traumatic shock disorder, and the many men who failed to integrate successfully back into society after the time in the army.

The seeds of second-wave feminism began to be sown in this period, as women began to come together and form all-female groups, where they discussed the problems that they were experiencing. While feminism was still a long way off in many ways, women were becoming primed for it. They too wanted to have the control that Leo imparts on its people.

Women born during this time walk continue to be powerful and outspoken with big personalities, and their age now, in 2017, diminishes this not at all. These women, born under the sign of the lion, are not likely to lie down and take anyone else’s crap. On the contrary, they go after what they want with dedication and passion, and have strong views and morals.

Growing up in a time when women had to be extra-loud and completely fearless if they wanted to be heard at all, it’s no wonder that women born during this time developed the ability to speak up for what they believe in with such conviction!

Like women, men had a tendency during this time to speak up loudly for what they believe in, and not back down until they got it. However, given the power differences between men and women at this time, the effects were a little different when men did this.

When a man in a powerful position, in a society that gave a lot more credence to male voices to begin with, started speaking up about what he wanted and refused to back down, he often ended up getting a lot more than we might say he had a “right” to. This is how dictatorships are formed – someone who already has a position of power starts speaking with the kind of conviction and charisma that non-power-holding people need to get themselves noticed at all, the the effects are multiplied exponentially.

While it would be incredibly unfair to say that all men during this time were domineering or power-hungry, there was certainly a pattern to that effect, at least among the men that history has remembered. Those qualities were highly rewarded in 1940s and 1950s culture, and so we remember the men who had them.

Power within family units became heavily focussed on the patriarch of the family, to the detriment of vulnerable wives and children in many cases. Men returned to their families after the tight-knit all-male army units and moral purity of the War, and expected those features to be the same. It was not to be.

Men born during this period are as outspoken and opinionated as their female counterparts. Many of them turned to art as a focal point for their opinions, which was behind much of the great politicized art of young adults in the 1960s and 1970s.

It should be noted that, to a greater extent than any previous phase that Pluto passed through, it is difficult here to say what qualities we can attribute to “men” and to “women.” Boundaries between the genders were becoming highly blurred, and so these are only vast generalizations about what more men and more women have seemed to do, from a historical standpoint.

Pluto in Leo In Love

It’s no wonder that women got a little tired of it! Gender roles, especially in media portrayals, were very strict, and aberrations were considered shocking by most people, although they did gain some traction in the counterculture, and among people who were in search of something a bit more “risqué” than what the mainstream had to offer.

Many men in this time frame had a very difficult time adapting to married life after spending time in the military. The high degree of structure, all-male group, and unquestionable power dynamics did not always transfer well to the less structured, mixed-gender dynamics of the home, where, on top of everything else, women were increasingly seeking autonomy.

Relationships that did last well through this period can be held up as great examples of people beating the odds, because the odds were definitely not in their favour. However, relationships at this time that were successful remain some of the most highly praised ones today, as the qualities that were desirable in those (a clear respect even with the differentiation of power, and a visible seductiveness at the core), remain highly prized in relationships now.

If you were born during this period – well, there’s an excellent chance that you’ve had at least one marriage or similarly committed long-term relationship, so I won’t lecture you too much about how to find love! If your relationship was or remains successful, I feel confident that it was because you found a partner with whom you shared a similar worldview about how power should be distributed, yet, no matter what the power differential might have been like between you, you shared an underlying respect for each other.

Dates for Pluto in Leo

Pluto was in Leo between the years of 1939 and 1958 – a turbulent, traumatic nineteen years. This period was marked by incredible political upheaval, and left a hardened, cynical population in its wake.

People who lived through this time, especially those who were born and had their early childhoods in it, learned very quickly that if they wanted to be heard or make a difference, they had to speak up loudly. This was not a time for quiet, under-the-table change, but instead for loud protests and political rallies, paving the way for what was to come in the 1960s and 1970s. It’s only unfortunate that, during this time, a lot of the people who hosted loud protests and political rallies had dictatorial aims rather than ones that would benefit society as a whole.

For those who managed to avoid the tragedies of the Second World War and the worst anxieties of the Cold War, the latter part of this period has been largely looked back on with rather fond eyes. The 1950s, in particular, have relatively positive cultural connotations compared to the rest of the twentieth century.

Pluto is not coming back into Leo anytime soon, so for those who were born during this time, enjoy the fact that your strong voices can stand out, and not be drowned out by people who can use similar rhetoric for nastier ends.

The period when Pluto was in Leo is the only one in recent memory that rivals Pluto in Cancer for the amount of global trauma, turmoil, and tragedy that was taking place. The combination of Leo’s fiery energy with Pluto’s merciless tendency to incite upheaval and bring hidden feelings into the open make for a volatile combination.

This period was marked by power struggles, dictators, and totalitarian political regimes all over the world. But it was a time of power struggles and authority problems for individuals too! Leos never like to be wrong or feel like they’re being “put in their place” by someone else, so people born during this time may have felt some strain in their relationships!

People who managed to survive this period came out shaken, hardened, and prepared for the worst. Even now, half a century later, those who survived it are still affected by its power. The enormous effects of Pluto in Leo will probably not fade from the global consciousness for hundreds of years still.