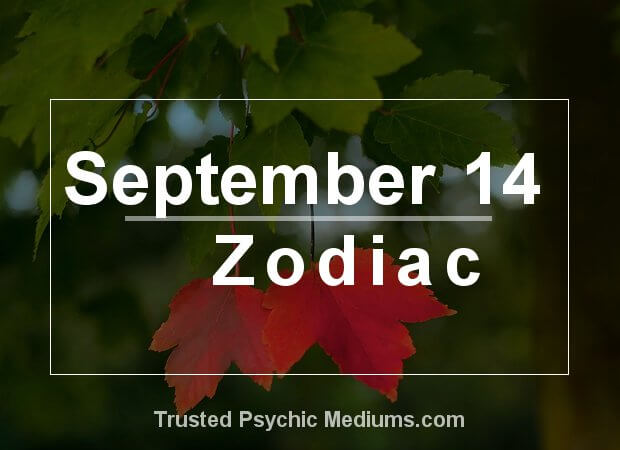 What is your Zodiac Sign if you were born on September 14?

If you are born on the 14th of September, your zodiac sign is Virgo.

As a Virgo person born on this day, you make a big deal about the fact that you are some sort of visionary.

The interesting thing about this Virgo aspect is that for the most part, Virgo people are constrained by how things are.

They are so fixated with staying well within “reality”. They have such a limited definition of reality that they really only have themselves to blame for their lack of imagination.

You, on the other hand, are very different.

You look in terms of possibility. Now, this may be good, but the problem is, you tend to be quite extreme about it.

In fact, you are so extreme, that people might be forgiven, to mistake you for an Aquarius. That’s how up in the air, so to speak, you can be, as far as your ideals go.

But, as the old saying goes, “There is a method to the madness. Keep reading below.”

Lovers born on September 14th are very tolerant of differences. You really go out of your way to be as open-minded as possible.

In fact, you run the risk of tolerating infidelity, backstabbing, betrayal, and otherwise being used as an emotional doormat.

The interesting thing about all of these is that your take on it is that, the more hurt you feel, the more of a moral hero you become in your mind.

You are essentially suffering because you truly believe in your ideals.

Now, it doesn’t take a rocket scientist to understand that this is very wrong. This is sick. Do yourself a favor, and respect yourself enough to demand respect from your romantic partner.

Otherwise, you are going to find yourself jumping from one unhappy relationship to the next.

Those with a birthday on September 14 are best suited for careers in the arts.

Since you make it a production of how idealistic you are, and how fearless you are in pushing boundaries, and eliminating barriers, you would do really well in anything to do with creative arts.

Now, don’t think that this feel only means theater, music, and painting. It’s more on that. It can involve advertising.

It involves all sorts of science-based art. The bottom line is, as long as it has anything to do with imagination, you would do quite well in it.

You have an inborn sense of making a public show of your idealism. This is rooted in the fact that deep down inside, you know that you’re really not that idealistic.

You just make a big deal out of your idealistic side. Your biggest fear really is to be found as a fraud.

Now, we’re not talking about you lying, or concealing a material fact, or otherwise committing a fraud that would get you into legal hot water.

No, we’re talking about fraud in terms of trying to fool people into overestimating your creative capabilities.

Now, this doesn’t necessarily mean that you will always lack for artistic talent.

What this means is that, you should just focus on building your real talent, instead of just hyping it up in melodramatic forms.

Positive Traits of the September 14 Zodiac

If there is any one positive trait about you, and there are actually quite many, it is the fact that there is never a dull moment when you’re around.

Really. I know this statement has been said of many other signs of the horoscope, but when it comes to you, it takes special meaning, because you really make a big spectacle of things.

You blow things out of proportion.

Everybody laughs. You laugh. Everybody has a good time. And the best part is that, there’s all sorts of creative flair, melodrama, and hype involved.

As long as you understand that it is not real, and it’s just for fun, you will have a good time.

The downside is that sometimes you take yourself too seriously, and this could lead to all sorts of problems.

Negative Traits of the September 14 Zodiac

Deep down inside, you’re a very insecure person. This is why you have to blow things out of proportion. You try to pass yourself off. In many cases, as somebody that you’re not.

The good news is that there’s really nobody in this world that you should impress except yourself. Try to accept yourself first.

Try to be happy within your skin, and you’d be surprised as to how far you’d go in life.

Otherwise, you’re always going to be running a losing race. You have to remember that nobody can love you more than yourself. Start there.

The particular aspect of earth that is most relevant to your personality is that earth has many unreachable parts.

It may seem that human beings have mapped every square inch of planet earth, don’t believe it for a second.

Let’s take the oceans, for example. Did you know that the vast majority of ocean depth is unexplored?

It’s just simply too expensive, and too dangerous to explore the vast majority of the ocean.

This is reflected in your personality because what drives your otherwise flamboyant, and showy personality, is a deep almost unreachable level of insecurity, and a sense of inadequacy. If you are able to explore that part of yourself, you can really take things to a much higher level.

It’s not unknowable in the sense that we can’t send a rocket to Mercury.

The problem is, if we send a rocket to get to Mercury, it will burn up, because Mercury is so close to the sun. Keep that in mind.

There are certain parts of your personality that are unreachable, not because it’s technically impossible, it’s because you are so scared of getting in touch with certain aspects of yourself.

That is your big life project.

My Top Tips for Those with a September 14th Birthday

You should avoid surface relationships. When you always focus on what happens at the surface, and making a big show, and appearing the right way to the right people, you end up living a lie.

Do yourself a big favor and just allow yourself to get real with yourself, and you’d be surprised as to what you would find out.
top tips

You should avoid aiming for the surface. When you make a big deal out of surface appearances, Eventually, your bad decisions will come to haunt you.

You have to focus on what’s real. And oftentimes, what’s real involves things that we’d rather not deal with. Things we’d rather sweep under the rag, and otherwise forget.

But, make no mistake about it, just because you’re not looking at something, or you’re not seeing something, doesn’t necessarily mean it doesn’t exist.

You are so capable of so much more in your life.

Do yourself a big favor and confront some unpleasant and even inconvenient realities in your life and you’d be surprised as to the kind of victories you would be able to achieve.

The lucky color for those born under September 14th is represented by the color Azure. This is a very interesting color because blue is the color of power. Azure is of course blue.

You have what it takes to live a life of power, meaning, and significance.

The problem is, you are grappling with deep-seated insecurities and a sense of inadequacy, that tends to rob you of so much power that the best thing you are capable of is the appearance of power, instead of its substance.

By focusing more on substance, you would become much more happier.

This Gemstone is Perfect for Those Born on September 14th

It’s easy to fall in love with the sapphire, the birthstone for those born on 14th September, as well as within the wider month of September altogether.

Often seen in a rich blue, but also available in other colours, this stone has a great deal of culture behind it.

In terms of spirituality though, sapphire is a stone with a lot to offer – especially for people born on 14th September as a Virgo.

Sapphire is a stone closely attuned to clarity of mind, which is a very important notion to every Virgo going, thanks to the strong intellect of this star sign.

However, it’s also a stone that speaks to clear communication, and of helping you to find the words to say to express yourself in even the most difficult of situations.

Articulating yourself well can be that much more simple when you welcome the energies of sapphire into your life.

Final Thought for the September 14 Zodiac

The only person that’s really holding you back from the life you’re capable of leading is yourself.

If you’re completely honest with yourself, the main thing that’s holding you back is fear. There’s nothing to be afraid of.

What’s the worse that can happen if you explore certain aspects of your personality that you’d rather hide from yourself. What do you think will happen?

Sure, there may be some pain involved because a lot of your long-standing views would get challenged, but that’s a small price to pay for what you stand to gain. You have to focus on that.

If anything, you’re hanging on to something that’s just holding you back.