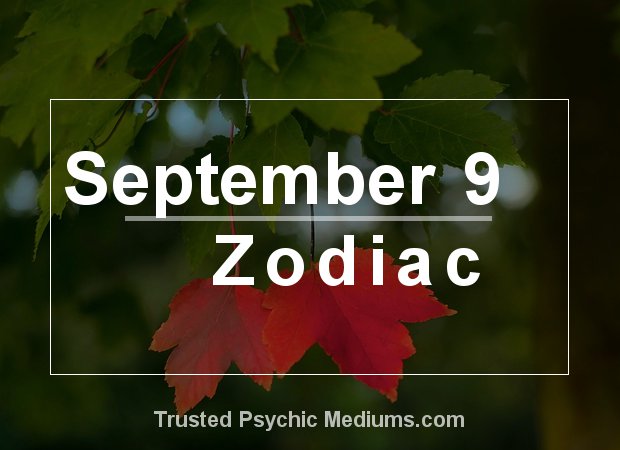 What is your Zodiac Sign if you were born on September 9?

If you were born on September 9th, your zodiac sign is Virgo.

As a Virgo born on this day, you are a very quiet and analytical person. You’re also quite modest; you don’t like to take the spotlight.

In fact, you’re so shy that you’d rather not attract any attention to yourself. This doesn’t necessarily mean that you’ve got nothing to be proud of.

You actually have a lot to be proud of.

You are very analytical; you pay attention to detail to such an extent that you are able to come up with conclusions that people simply overlook.

This makes you a very valuable member of any team you find yourself in. You also focus on making sure that whatever you do is done accurately and precisely.

A lot of people might think that you’re a stick in the mud and are a killjoy, but it is precisely your inputs that your groups require to achieve excellence. Excellence is a big deal with you.

Lovers born on this day are very exacting.

You are quiet and charming in that way. You don’t make a big deal, but people can tell that you have a lot to offer.

When you have matured quite a bit, you can be a very quietly confident person. People feel reassured around you. This accounts for your tremendous seductive appeal.

You’re not the type of person who tries to rush into any situation, and try to prove how important or big you are. You don’t play such games.

People can spot a mile away that you are a person of substance. They can tell immediately that you have a lot of value to bring to the table.

This is what attracts people to you.

People born on this day will be well-suited for any type of career involving groups.

If you pick a career field that involves some sort of group dynamics, you will do well.

Now, you’re probably thinking that broad definition pretty much applies to all career fields, and that’s exactly my point.

You would do well in any kind of career. Even if you switch fields during midlife for several times in your life, you have what it takes to succeed. Just focus on what you’re good at, which is the details.

You may also find this interesting:  September 19 Zodiac

Nothing worries you more than seeing things are off or out of place. You also believe in doing things right or otherwise, not doing them at all.

Now, this tends to irritate or annoy people who are simply content to skate through life.

However, once they notice how successful you become because of your attention to detail, they can’t help but be inspired.

They might not like you, but they would be inspired and impressed by your ability to make things happen.

It’s not because you’re super talented or intelligent; instead, it has everything to do with the fact that you believe if you’re going to follow a checklist, you might as well make sure that every item is followed correctly.

Positive Traits of the September 9 Zodiac

Your attention to detail and precision enable you to pinpoint issues that are happening in your life and other people’s lives.

If you were to fine-tune your communication skills, you would be able to bring a tremendous amount of positive change in other people’s lives, as well as your own life.

Your tendency of never leaving a stone unturned can pay off handsomely in all areas of your life.

The reason why so many people fail to achieve the kind of success and level they are capable of reaching is that they tend to speed through life.

They tend to cut corners and do a half-hearted job in many crucial areas of their lives.

This is really too bad because if they only learned to fill out the checklist the proper way, they would be able to achieve more victories. That’s exactly what you’re doing.

Negative traits of the September 9 Zodiac:

Unfortunately, just like with any sign of the horoscope, you have a negative side. Yours is simple but deadly: you hold other people to your standards.

Now, there’s a reason why people are annoyed by your standards. First of all, they’re the correct standards; let’s get that out of the way.

People, if they’re smart enough, would know what they should do. You know what should be done, and you stick to it.

However, there are a lot of smart people out there who know what should be done, but because they’re lazy, or they just want the path of least resistance, stay away from how things should be done.

You may also find this interesting:  September 15 Zodiac

This creates conflict if you were to point it out.

Your big challenge is to be able to communicate in such a way that it doesn’t step on people’s emotional toes.

You need to work with people, and make sure that your differences work for the interest of the group, instead of against it.

The particular aspect of earth that is most relevant to your personality is its fine-powdered nature.

It’s easy to dismiss earth because it’s just stuff that you grow vegetables and living things in.

However, when we pay close attention to the fine-powdered nature of earth, we are more able to tap its fullest potential.

We can grow more crops, create more structures through bricks; you name it.

This is relevant to your personality because it’s your fine particular approach to things that enable you to achieve success. This ability enables you to make things happen.

The particular aspect of Mercury that is most relevant in your personality is its fine-tuned speed around the Sun.

When broken down into many different parts, it’s actually very minute and specific, which reflects your attention to detail and obsession with precision.

My Top Tips for Those with a September 9th Birthday

You should avoid nitpicking too much. Understand that there is a certain point where you can say that a standard has been met.

Now, your standard may be really high, but there is also a happy point where you can just put your arms up in the air and say that the job is done.

One of your biggest challenges is that you never know when to stop. You think that the natural stopping point of any kind of job is 100%.

Well, that’s true in theory; in reality, you can really drive a lot of people crazy if you insist on 100%.

Believe it or not, 99.99% is quite good, especially if other competing teams, companies, or people, barely come in at 75%.

It’s not a surprise why this is your lucky color because any dark color means a concentration of that color’s attribute. Green is the color of growth or the ability to grow. You have it in spades.

You may also find this interesting:  September 25 Zodiac

While your mind is often your strongest asset when you celebrate your birthday on 9th September, it’s not just your logical and rational mind that has the most to offer you.

Your dreams are also rich with symbolism and lessons that you can take with you into the waking world.

A common dream theme that can be a bit difficult to deal with in the moment is a dream about being chased.

While this can feel distressing, it actually has a lot to tell you about feeling under pressure from other people.

It can feel as though you are under intense stress and pressure – yet if you were somehow able to turn and confront those pursuing you in the dream, would they be so frightening?

Would they even attack you?

This is a dream asking you if what you fear is the same as the reality of the situation – an invitation to see if your worries are overpowering your rationale.

Final Thought for the September 9 Zodiac

You have what it takes to be a really successful person. You really do, but you need to relax regarding your standards as far as your efforts go.

You can literally work yourself to death. Understand that there is a natural point where you can say, “I’ve done a great job.” Now, this doesn’t mean that you should backslide, or you should relax.

What this means is that you need to look at the essence of your quality standards and stick to them. Focus on the spirit, instead of just the letter of any kind of instruction or standard.