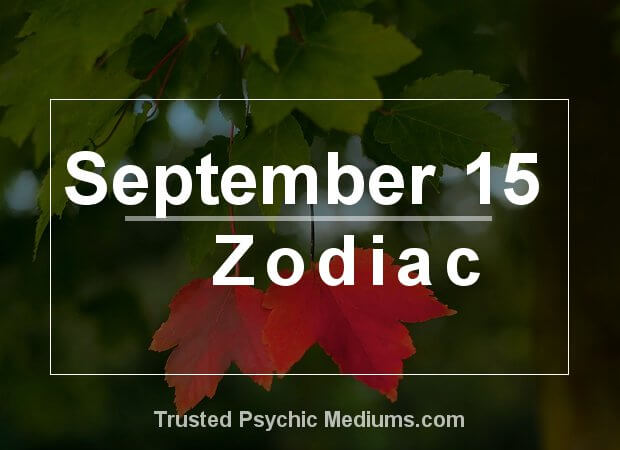 What is your Zodiac Sign if you were born on September 15?

If you were born on the 15th of September, your zodiac sign is Virgo.

As a Virgo person born on this day, you are a very judgmental person. You really go out of your way to tell people uncomfortable truths they would rather stay away from, hide, or deny.

There’s a reason why people do this. Let’s face it, not all of us are heroes. In fact, most of us are cowards.

We’d rather stay away from things that hurt, embarrass, and humiliate, and we flock to things that bring pleasure.

Deep down, this is how you’re like as well. But the problem is, you have it in you to think that by forcing people to confront such uncomfortable truths, you would bring them a tremendous favor.

You’re not. If anything, you’re just managing to reveal yourself to be some sort of emotional bully.

You tend to do this quite a bit. You think you’re being a hero. You think you are like that little kid in the tale of The Emperor with no Clothes on.

But, eventually, you will meet your match. You think you are driven by the noblest of motives, but deep down inside, you get a kick out of it. And it’s not always from a positive place.

Lovers born on September 15th have a tendency to humiliate people who become close to them.

The interesting thing about all of these is that you think you are being motivated by love.

You think that by forcing people to “toughen up” emotionally around you, you are doing them a great favor. That’s not what you are achieving.

What you are achieving is that you are pushing them out of your life. You’re giving them reasons to dislike you. People are drawn to you because you can be very funny.

You’re definitely very intelligent, and can be quite compassionate in certain context.

But, all of that evaporate in light of the fact that you seem to delight in embarrassing people on many different levels.

The worst part to all of these is that these people tend to be the ones who trust you the most. They’re the ones who are relying on you to keep them safe emotionally.

Those with a birthday on September 15 are best suited for jobs involving judgment. You would make for a great judge.

You would make for a great referee. You could also make for a great mediator or arbitrator. Whatever the case may be, as long as the job involve making some sort of call, you can do quite well in it.

You have an inborn sense of misplaced priorities. You believe that you are operating with the highest and most noble of intentions.

In your mind, as long as you’re motivated by the right things, you can pretty much get away with committing very hurtful acts.

As you can probably already tell, this does not fly. You are judged, not just by your actions, but also by your motivation.

In Criminal Law, an act is criminal in most cases, if it is accompanied with the right intention. Although there are many types of crimes, where the intent is already assumed.

But for the most part, the law operates based on act and intention. And unfortunately, you can’t expect people to read your mind.

You may be driven by the most noblest of intentions, but you usually end up turning people away.

Positive Traits of the September 15 Zodiac

Your tendency to focus on uncomfortable truths, as irritating, and annoying as it may be to the vast majority of people, can actually be very healthy, and very much welcome in certain contexts.

Your great challenge is to know when to turn on this aspect of your personality. Because if you do it at the right time, and in the right context, you’ll produce the right results.

Negative Traits of the September 15 Zodiac

You come off as overly harsh, judgmental, and condemnatory. Instead of getting people to feel good about themselves, you often say things that make them hate themselves.

In fact, you can be so discouraging, and damaging, that you rob people of many of their hopes and dreams.

You can be so discouraging, especially when somebody comes up with some sort of business idea, or a career opportunity.

You can shoot down that idea in the harshest way possible that they just basically give up all hope.

You may think that your opinion doesn’t really matter, but you’d be surprised as to how many people take your word to heart. Be very careful with what you say to people.

Earth is the paid element of all Virgo people.

The particular aspect of earth that is relevant to your personality is when earth swallows up people. Yes, it happens. These are called sinkholes.

What happens is when there is a watered table under the earth, and it gets disturbed to the extent that there is so much water passing through that it erodes the earth underneath, and a sink hole is formed.

Sinkholes can pop up anywhere. They are definitely very dangerous.

This is relevant to your personality because that is how you operate. People think that they are in good terms with you.

People think they can trust you, and then all of a sudden, you end up judging them, and condemning them. They then end up so discouraged that they give up on certain things. Talk about depressing.

The particular aspect of Mercury that is very strong in your personality is Mercury’s tendency to turn quickly. Your moods can turn quickly.

You can be very entertaining, witty, and charming, and then all of a sudden, you end up emotionally beating up people around you.

You may think that you are simply keeping it real, and are trying to give them the gift of honesty, but in many cases, you just totally demolish whatever hopes, dreams, and conceptions, they may have of themselves.

Try a little gentleness. This doesn’t mean that you have to stay away from the truth.

This doesn’t mean that you have to lie, but be more gentle with how you phrase things.

My Top Tips for Those with a September 15th Birthday

You should avoid using harsh words. You may think that you are using the most precise, and exact terms possible.

You may think that you’re doing people a big favor. But deep down inside, you’re hurting people. You’re making them feel like trash.

You have to remember that for the most part, everybody is entitled to their own limited sense of unreality.

That’s the kind of right that we get as human beings. Respect that right by phrasing your judgments and pronouncements in a way that doesn’t lead to too many destroyed egos.

The lucky color for those born under September 15th is represented by the color powder blue.
This fits your personality like a glove. Blue is the color of power.

You’re trying to convey power. You’re trying to empower people, but with your words, and the truth you convey end up crushing them instead. It comes off as some sort of cruel hoax.

This is the Most Common Mistake 15th September Zodiac People Make

There’s a lot going for Virgo people, all told.

They have the enviable talent of having one of the zodiac’s most refined minds, and they similarly have an eye for detail par excellence that enables them to create both neat and appealing presentations, living spaces, outfits – even works of art.

Yet a common mistake to people born in the middle of September, such as a Virgo born on 15th September, is to let their cynicism take over a little bit.

It can be too easy for these people to assume the worst of others, or think that everyone has an agenda behind their acts of kindness.

Life isn’t all underhanded tactics and backhanded compliments though.

Sometimes there’s no ulterior motive beyond being nice to be nice – so being suspicious of everyone all the time is going to create problems where none exist in every aspect of your life.

Final Thought for the September 15 Zodiac

Words do matter. Make sure you watch your words. Make sure that you phrase your observations, and conclusions, in a very diplomatic way.

These people have learned to depend on you.

If you end up condemning them, crushing them, and crushing their hopes, you become a toxic influence in their life, and I’m telling you, it’s not going to end in a pretty way.