Eight of Swords Tarot Card and its Meaning 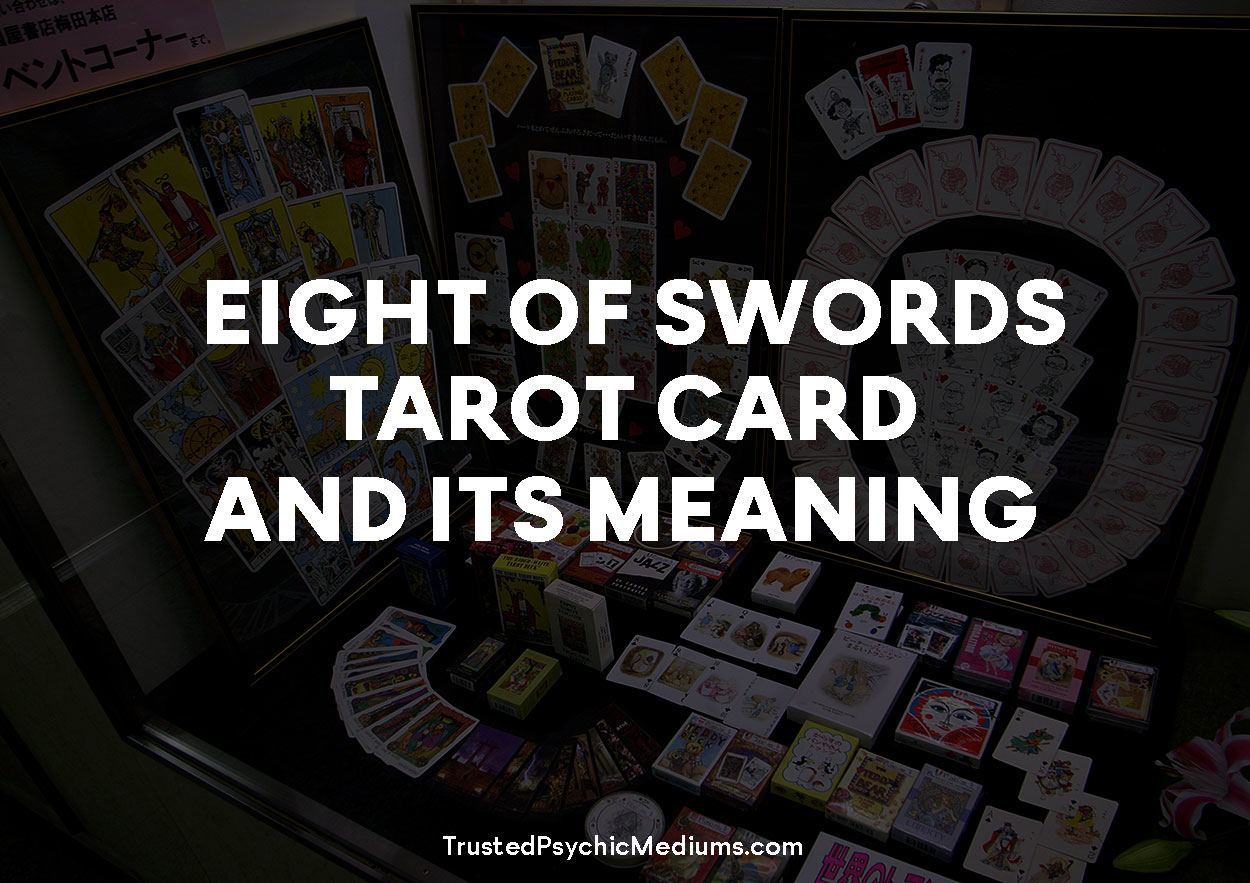 The Eight of Swords tarot is the card that represents isolation and imprisonment.

It signifies self-imposed restriction and limitation.

It indicates fear and illusion, exclusion and misperception.

The Eight of Swords tarot is depicted as a woman tied up and blindfolded. She is enclosed in a wall of swords and there is no way to escape.

The woman stands there alone and abandoned in the middle of a wasteland, and the sky overhead looks dark and cloudy. This symbolizes hopelessness and despair.

The Eight of Swords tarot suggests a time or a period in your life where you feel trapped by your own thoughts and beliefs.

If only you can untie yourself and remove the blindfold, you will see that there are options. There are choices. And it’s not as hopeless as you think.

Stop thinking of yourself as a victim. Open your eyes, look around, and draw strength from inside you to get yourself out of a difficult situation.

The Eight of Swords tarot is also an indication that because you feel trapped in the situation or the circumstance, now is not the best time to make major and life changing decisions.

Your judgment is limited and you feel restrained by your self-imposed restrictions.

There are many choices and options available for you, but you have to achieve a healthy mindset first. Wait until you’re ready. Wait until a decision feels right to you.

If you’ll notice the woman in the Eight of Swords, she does not look like the world’s most powerful and most empowered woman, unlike the one in the Seven of Cups.

She has given up her power to someone she thinks is more superior and more powerful.

You have to take back your strength and your power.

The Eight of Swords tarot represents a dilemma or an indecision. You don’t know what to do and you don’t know which way to go. But there is always a way out.

The Eight of Swords tarot also indicates that people will disapprove of your choices and your interests and this can discourage you from reaching your true potential.

Remember that you only need to listen to yourself and to the people who look after your interest. Everything else you can ignore.

Eight of Swords Tarot and Love

When it comes to love and relationships, the Eight of Swords tarot signifies that you feel restricted, which is in contrast to the symbol of Two of Swords.

You can be indecisive or clueless, and that’s perfectly fine! Everything has a transition period, most especially relationships.

If you have been together for a long time, the Eight of Swords tarot can also indicate that you are restricting your partner’s power.

You are the controlling one in the relationship and he is left to think that he has no choice but to follow what you tell him to do.

The Eight of Swords tarot can also appear if you are being cheated or deceived in a relationship.

You think you’ve got a good thing going with your man, but when you’re not around, he’s also got it going with another woman!

This card can also appear for someone who is afraid of commitments. It can also represent someone you love who does not feel the same way for you.

Whatever you do and no matter how many hints you drop, he just won’t do relationships.

When the Eight of Swords tarot appears in the reversed position, this indicates a need to reevaluate your relationship.

That’s actually worse than being single — being alone and miserable in a relationship. Don’t expect your relationships to fix you. You have to do that yourself.

A reversed Eight of Swords tarot also shows that you’re heading towards progress or improvement.

Eight of Swords and Money

When it comes to money and finances, the Eight of Swords tarot warns of self-fulfilling prophecies.

If you think it, it may happen. So stop thinking that your luck will never change and you will live from paycheck to paycheck. Start thinking of abundance and prosperity and your attitude will change tremendously.

Work with your skill sets and explore new ways to make money. Expect good things to happen while doing good and honorable things to make your dreams into a reality.

Eight of Swords Tarot’s Meaning for the Future

When the Eight of Swords tarot appears in the future position, it issues a strong warning. This indicates sluggishness, indifference, and loss of passion for life, unlike the Ace of Swords.

If this is in the cards for your future, consider the things that you have in the present and be ready to make some major changes.

If you don’t want disappointment or failure in your future, you should address issues now and avoid being trapped.

Is the Eight of Swords a Sign of Good Luck?

The Eight of Swords is a rather interesting card to draw especially when you look at the image that is depicted on it.

What you see is a woman who is blindfolded and surrounded by eight swords but with a gap in front.

It represents the idea of feeling trapped and bound by things, and yet if she simply took off the blindfold she would see that there is a clear path ahead of her.

This all translates into the individual feeling as if they are unable to change things and that they lack the power to do so.

It represents a sense of being helpless and that you largely have no control over various aspects of your life. Clearly, this is a rather depressive situation to be in.

There is also the idea that the individual has really handed over the power of controlling their life to something, or someone, else.

Your judgment is clouded and you have given this power rather willingly for whatever reason that may be.

However, there is also the knowledge via the card that there is a way out of it all if you are just able to actually look at what is going on and are willing to go ahead and make some changes.

When it comes to the Eight of Swords being drawn in reverse, then it is still not a sign of bad luck but to rather act as a warning for you to begin to take notice of things.

Also, it argues that you need to set aside time to look more closely at your own self rather than focusing on others, so it is more of an attempt to just get you to turn the attention to you instead of you worrying about anybody else for a change.

This card in reverse can also signify a difference in maturity levels as well as a sense of self-acceptance.

It can also result in effectively removing those issues that have been holding you back or making you feel down and carry out those changes that you have been wanting to make for some time.

There should be a confidence in you to go ahead with it all, and then there will be a sense of freedom and an ability to express yourself like never before.

Even with all of these changes, there is still no mention of it being a negative thing or the possibility of encountering some bad luck.

Instead, the Eight of Swords is all about telling you to not be afraid in any part of this and to then take those first steps as a brighter future is well within your grasp.

In other words, this card is indeed a sign of good luck although it states this in more of a round about way rather than explicitly saying so.

However, it will not discuss any bad luck or anything that is a negative at any point, so there really is nothing to be afraid of when it comes to your future.

My Final Thoughts on Eight of Swords Tarot

The Eight of Swords tarot wants you to welcome failure or disappointment so that you will better appreciate what it feels like to win and succeed.

Don’t be fearful of the future or of the unknown. What you don’t realize is that a better life waits for you there, brimming with hope and abundance.

Think, speak, and act carefully. Think about your choices and deliberate on your decisions.

If you need help, ask for help.

The Eight of Swords tarot asks you: What is it in your life that you refuse to see, and why do prefer not seeing it?

How do you rid your life of your emotional poisons? How do you take back the control over your thoughts and apprehensions?