Five of Wands Tarot Card and its Meaning 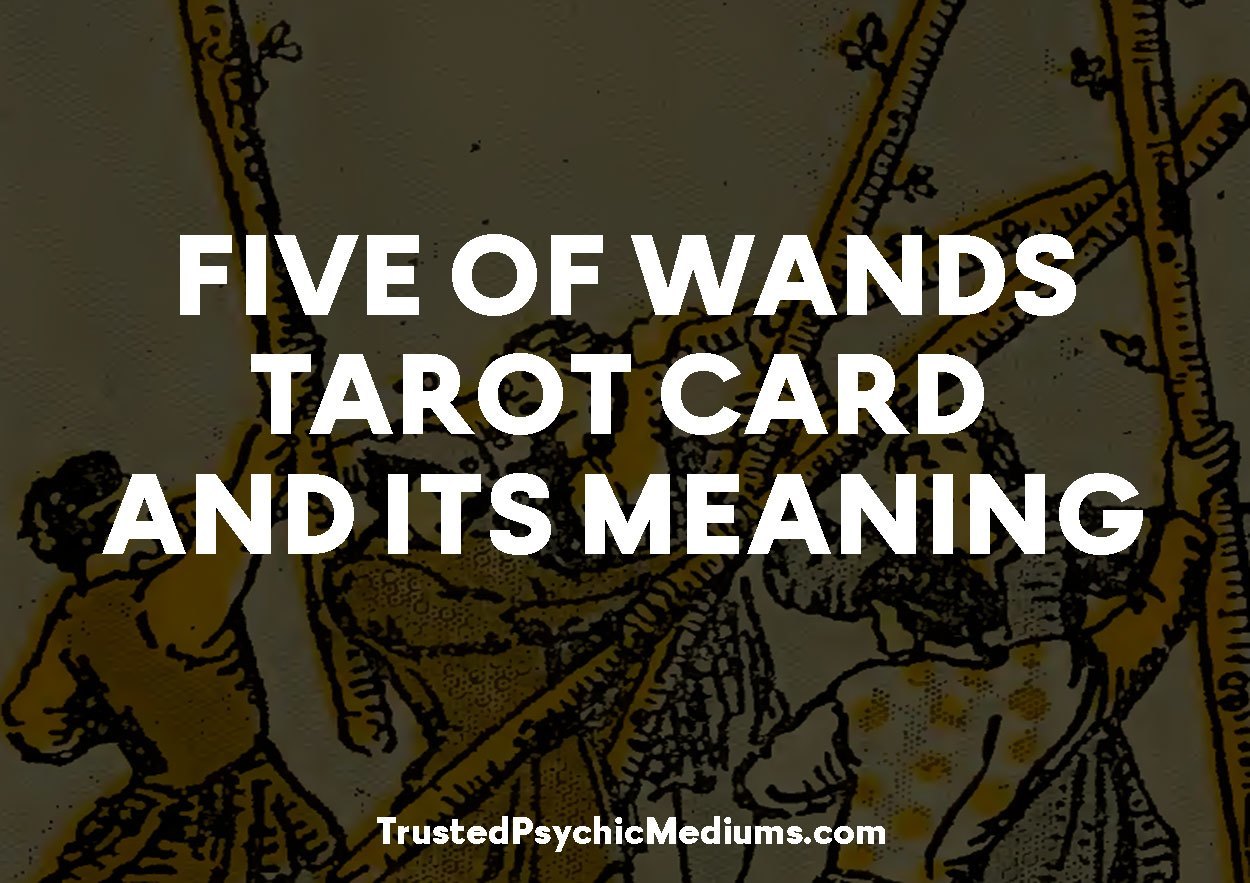 The Five of Wands tarot is the card that signifies disagreements and tensions, competitions and conflicts, which is in contrast with the symbol of Two of Cups. It indicates strife and challenge.

The Five of Wands tarot is depicted as five men engaged in what seems to be a fight with their long wooden wands. The scene is chaotic and competitive.

However, upon closer inspection, you will notice that the wooden wands are not hitting the other men.

It’s a possibility that there’s no intention to hurt or attack anyone, and this is all done out of enjoyment or amusement.

The Five of Wands tarot signals a time in your life when you’re experiencing conflicts or changes, like the Three of Wands. You are in the middle of conflict, competition, or tension, and it’s keeping you from moving forward with your tasks.

There’s very little progress because everyone insists on having their own way, and no one pays anyone else attention.

Your thoughts and opinions are constantly being challenged. No one agrees on anything because everyone has their own agendas.

Sometimes conflicts and disagreements can be beneficial, especially when it comes to meetings and brainstorming.

This allows different opinions to surface and to be voiced out, helping you to find the best solution that will make everybody happy and move the project forward.

Don’t get stressed over the first sign of tension or disagreement. This will help you improve the quality of your ideas and the manner in which you execute them. Use this as a positive contribution instead of something that will cause its collapse.

The Five of Wands tarot often signifies healthy competition. You have enjoyed your own successes and triumphs, as in the tarot of Six of Wands, and now you’re entering a much bigger field that is filled with equally successful and capable individuals.

The sheer amount of competition forces you to step up and try harder. It encourages you to fight for the top spot and show others what you’re truly made of.

The Five of Wands tarot wants you to respect diversity and different opinions. Each person has a different life story, so don’t expect them to behave or think in the exact same way as you. They all have something unique and valuable to contribute, so make sure that you’re always ready to listen.

The Five of Swords tarot wants you to embrace change. Change allows you to grow and keep you challenging yourself to be better.

Five of Wands Tarot and Love

When it comes to love and relationships, the Five of Wands tarot indicates that there is a clash looming.

Expect the worst. Expect a lot of negativity. Expect drama.

In relationships, your partner is no longer able to see the traits that made him fall in love with you in the first place.

Right now, he can’t see any reason why he should still be with you. There are just too many reasons to leave than there are to stay.

The Five of Wands tarot reflects the glaring differences in your relationship. You clash and argue all the time.

From which movie to watch to what food to order, to bigger and more important things like money, lovemaking, and future kids.

Sometimes this card appears as a sign to stop bickering and start talking like two mature adults. It asks you to take some time out to listen to each other — really listen to each other, and truly understand what’s causing all this negativity and drama.

And sometimes, the Five of Wands tarot appears because you simply have too many competition when it comes to your partner.

When the Five of Wands tarot is in the reversed position, it indicates that there will be no more pain or conflict in your relationship. Your days of bickering and arguing are over.

Five of Wands Tarot and Money

When it comes to Five of Wands tarot and money, it denotes that you need to be extra careful about the information you receive. You have to be on your guard about who you deal with in terms of money or investments.

You should also be careful about where you put your money. This can be a sign of future financial troubles. For businesses, make sure that you are meticulous with your bookkeeping, tax filing, and bills collection.

Regularly check your books and find irregularities or discrepancies. Make sure that everything is in order to avoid problems in the future.

Five of Wands Tarot’s Meaning for the Future

When the Five of Wands tarot falls in the future position, you will need to be a little bit reckless. You have to weigh your options and go for the best one.

You are the captain of your ship, so proceed with caution and make the most intelligent decisions.

Is the Five of Wands a Sign of Good Luck?

The Five of Wands is perhaps not the kind of card that you want to draw if you are hoping to over-indulge in some good luck.

In actual fact, this card is more to do with the idea of conflict, arguments, and a number of other emotions that are certainly far more negative, so from the outset it does appear as if this card is hardly going to be linked to some good luck coming your way.

This minor arcana card points towards conflicts, a clash of personalities, chaos, energy building up that can then explode outwards.

There is more than a hint of frustration and being irritated with people or situations which will result in poor decisions being made that will pretty much always make things significantly worse.

These negative connotations apply when the card is drawn in the upright position, and it also covers each and every aspect of your life.

You will find that your relationships are strained and do not feel that good to you while you may also be struggling with money, work, and your health is going to be negatively affected as well.

Clearly, this is not the kind of thing that you want to hear if you are indeed searching for a card that denotes you will be encountering a run of good luck.

Things do get better when you draw the Five of Wands in the reverse position as this will indicate that conflicts and issues are going to be coming to an end.

It can signify there being some kind of light at the end of the tunnel, which is something that you may never have expected to have happened.

That being said, there is the chance that it could also signal an increase in the anger and frustration that you are feeling, which is clearly going to make things significantly worse and harder to deal with.

Once again, this is going to apply to each and every aspect of your life so there needs to be a great deal of care when dealing with your thoughts and emotions or you run the very real risk of making life far more difficult.

Throughout the Five of Wands, there is pretty much no idea of it being a card that can ever be linked to the idea of good luck coming in your direction.

In actual fact, it does have a tendency to be the complete opposite to that, so it is going to be a card that you do not want to draw at any point.

However, it is not something to be afraid of as it is highlighting what is viewed as being wrong with your current predicament and, in that sense, it should be seen as being a warning that you might want to be paying attention to.

In that case, it all rests on your shoulders as to whether or not you encounter good or bad luck as a result of taking on board what this card is telling you to do.

My Final Thoughts on Five of Wands Tarot

The Five of Wands tarot wants you to believe in your abilities and capabilities. This is the time when you need to be stronger and tougher than ever.

This is the time when you have to stick to your guns and go with the decision that will be beneficial to everybody.

Remember that you don’t always need to be right to be respected. You must listen to other people’s voices and take any constructive point that you can.

Instead of fighting for your own cause each time, champion other people’s and help them be heard.

Always find common ground and highlight the positive points. Seek to reach a compromise and evaluate if your methods are still effective or appropriate.

The Five of Wands tarot wants you to pause, shut out all the noise, and reflect on this: What is your idea of a good and powerful leadership?

Can you count on yourself to be even-tempered and sympathetic? Do you feel like you have to be right all the time?