The Chariot Tarot Card and its Meaning 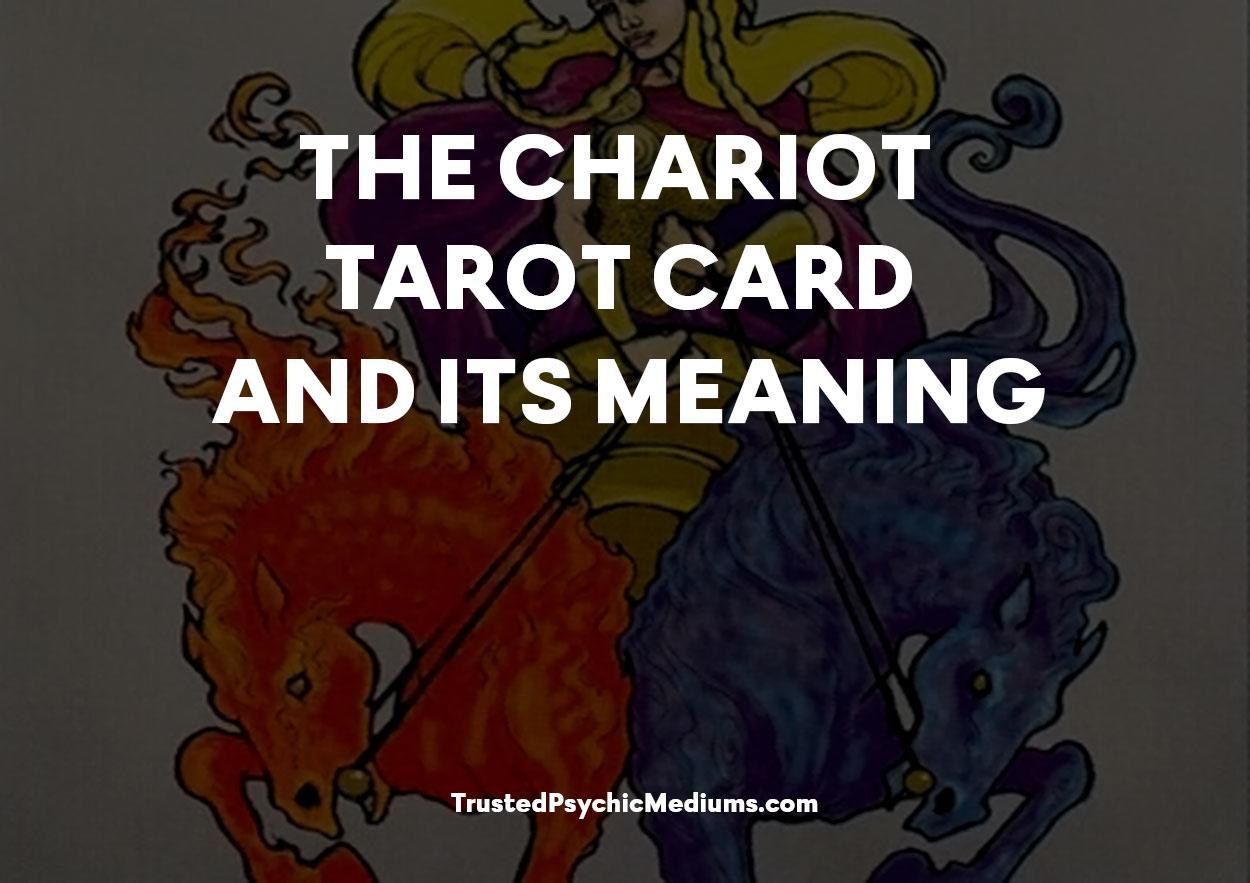 The Chariot tarot card means empowerment, determination, and ambition, just like the card of the Emperor. It means strength, drive, focus, self-control, success, and progress.

It’s a sign that you should continue with your plans and do your best to succeed. Much like the king standing victorious in his chariot, he has just emerged from a huge victory and is looking at the land to inspect how much his kingdom has grown over time.

The Chariot is pulled by black and white sphinxes, signifying victory in a foreign land, as well as the knowledge you must possess to solve the riddle. The king wears a crown which symbolizes the hope in his campaign for victory.

The Chariot tarot card is one of the most complicated cards to describe. In its simplest, the Chariot is about overcoming the odds and getting what you want.

They pull in different directions but can go on the same direction together. This is the most critical message of the Chariot.

The king, the sphinxes, and the Chariot all perform different things on their own, but throw them all together and give them the same objective, they all become unstoppable.

If you throw confidence, purpose, motivation, and control into the mix, there is no reason for you not to succeed.

When the Chariot turns up in a tarot reading, it signifies triumph or success achieved through courageous action and hard work. It can also mean a trip or a journey to a foreign place.

The Chariot Tarot and Love

When it comes to love, you may be enticed into going into uncharted territory. You may enter a relationship with somebody blindly just because it feels right at the moment.

You go in without thinking and hope for the best. You can just figure it out as you go. Sometimes it works, but most of the time it doesn’t.

If you feel like you and your man are moving a little too quickly, you probably are. So slow it down, gather your wits, pick up your clothes, and retouch the lipstick.

You are a strong and empowered woman, so don’t let anybody pressure you into doing things that you’re not comfortable doing. No matter how good he looks while sleeping. Without his clothes on.

When you can focus on the matter at hand and not the kinky stuff waiting for you in the bedroom, talk to your man about what’s okay and what’s not. Be honest and straightforward.

If a relationship won’t work for you now, tell him and stop stringing him along. You can’t force yourself to feel something you don’t and rely on willpower alone.

What the Chariot wants to tell you is that relationships take time to grow and develop. Don’t waste your time, or anybody else’s, if the relationship is going nowhere. Don’t think of settling either just because you don’t want to hurt anybody’s feelings.

Be in a relationship because you want to be committed to someone and can imagine a future with that person. Only then will you be able to be yourself and find what your strengths and weaknesses are as a partner.

The Chariot Tarot and Money

Financially speaking, the Chariot signifies that your finances are going well. This can also mean settling debts with your credit card company or completing payments of your loan. You are saving money, and investing well when you can.

The Chariot is a card of journeys and beginnings, like many other tarot cards like The Fool or Page of Cups, so when the unexpected happens, you have money to cover your expenses. Spend it wisely. Go ahead and buy that car, or that plane ticket to a place you can’t even pronounce.

Being debt-free is itself a tremendous accomplishment! You deserve a treat! (But hopefully one that won’t require you to max out your credit card again.) You can do it if you have the self-control and the self-discipline.

The Chariot Tarot’s Meaning for the Future

When the Chariot tarot appears in your future, you have some hard work cut out for you. You may experience some bumpy rides and rough roads.

The Chariot possesses strong power and raw energy. This fact alone should fill you up with confidence and determination to win the battle.

The Chariot is a major arcana card that is viewed as being rather powerful in the message that it is trying to bring to you.

However, it will be entirely at your discretion as to whether or not you then go ahead and listen to it.

When the card is drawn in the upright position, it indicates that you have a sense of determination and a huge amount of willpower that can then spread into each and every aspect of your life.

There is an idea of being motivated and very ambitious in what you do, but there is no real concept in the upright position of this then indicating that there is any bad luck on the horizon.

This is not a card that is going to throw up various obstacles that are designed to trip you up.

Instead, it is connected more to setting a scene whereby there will be challenges, but you have the ability to overcome them.

Also, there is the determination to do so whether that be in overcoming a health issue, changing career, or building wealth.

When we then look at the Chariot in reverse, then what we see is that there may be further increased difficulties coming your way in various areas of your life.

It can reveal that you feel as if there is no real sense of direction in your life and that you are unable to get past the obstacles that you believe are in your way.

There is a lack of confidence in your own ability to deal with various things in life and that you must begin to take control of things personally rather than allow external forces or influences to do it on your behalf.

This can all then lead to a feeing of anger inside you that threatens to burst out at any point as the frustration builds. Clearly, this is not a position that you want to be in.

In certain areas, the card in reverse can reveal that you are even trying to do too much and that this can then lead to additional problems and potential failure.

You can be making life harder for yourself when there is no need to do so, and when you are encountering this kind of more negative energy, then it can lead to a sense of more bad luck coming your way.

However, it must be stressed that this card does not explicitly comment on bad luck as such, but it is clear that the actions, emotions and thoughts that you are going to have to deal with can lead to bad luck affecting you.

The good news is that the card does provide you with solutions that will allow you to make the correct changes so that this no longer becomes a problem.

So, if you do draw the Chariot, then it is a bit of a mixed bag from a luck perspective, but overall it teaches you to pay more attention to your own self as that will then lead to a more productive future.

My Final Thoughts on the Chariot Tarot

The Chariot tarot is all about winning and achieving. Above everything else is the need to succeed. What do you live for? What motivates you? Do you prioritize your career over your relationships?

If you do, no wonder your relationships suffer and unable to make it to the next level. Your drive to succeed and your goal to maintain your winning streak puts a toll on your romantic affairs.

Your partner can be equally driven, equally competitive, and equally ambitious.

At the rate things are going, no one wants to sit on the passenger seat. So you will have to ask yourself some really serious questions whether you want to be there to take the wheel, or be there and just go along for the ride.

When it comes to the Chariot, there’s no turning back.

The only direction you have to focus on is forward, and making sure that you reach the destination the soonest possible time, on your own terms. You have to be ready to toss out the deadweights.

You have to shift gears and leave the past behind. You don’t have to make this journey alone, though. You can always bring someone along.

Just make sure that you share the same goals, and that they are making their way to the same destination.

Who knows, somewhere along the way, someone will be brave enough and strong enough to share the ride with you! Only time will tell. Do you dare to fly and see who’s brave enough to fly beside you?