The Emperor Tarot Card and its Meaning 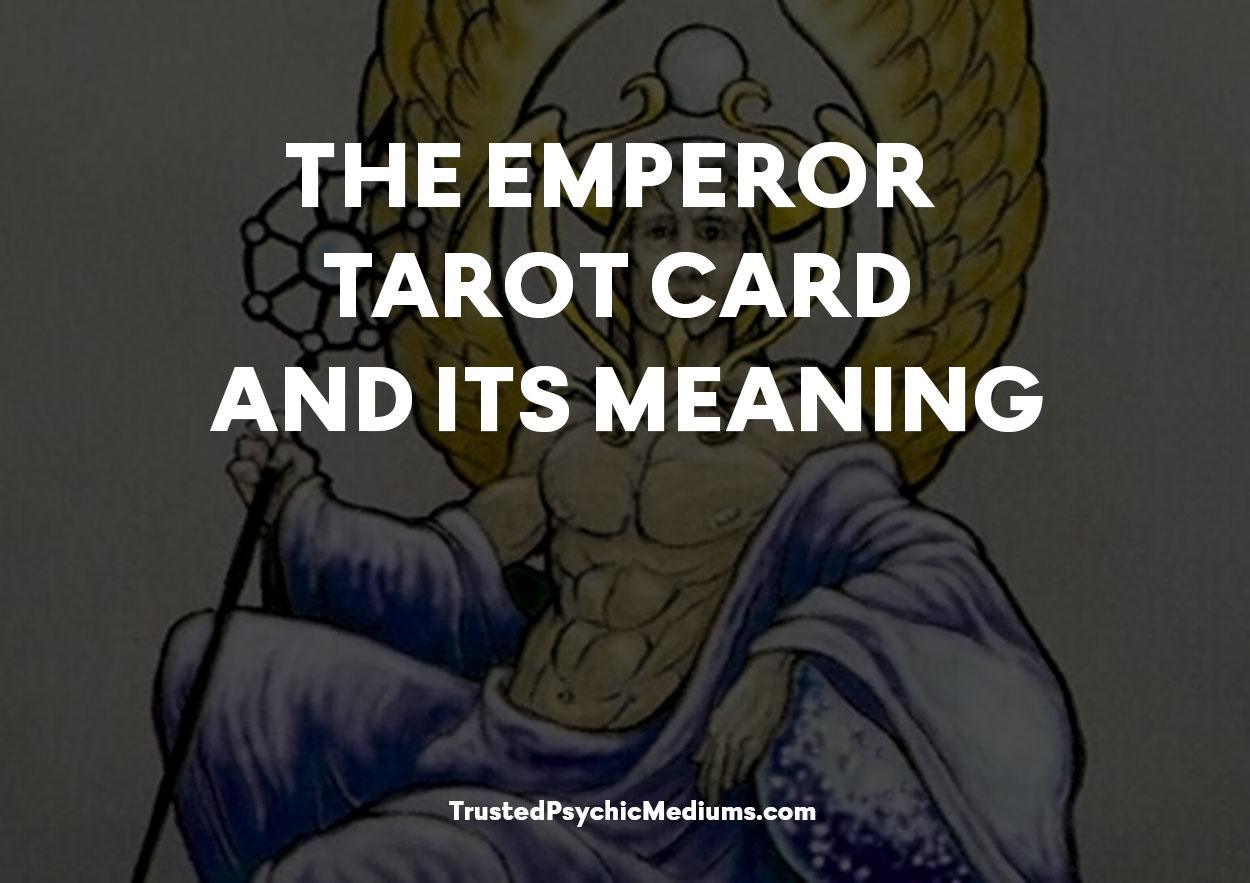 The Emperor tarot holds the paternal influence in the tarot deck, its counterpart being the Empress, of course.

Just like the card suggests, the Emperor is the authoritative figure who provides the organization, protection, and security.

We see a bearded man whose beard reaches his chest (the length of the beard symbolizes wisdom and experience), sitting alone on a throne made of stone.

Four corners of the stone are decorated with four heads of a ram, which is the symbol of Aries, the ruler of the Emperor.

It also represents intellectual prowess, determination, leadership, and action, like the King of Wands.

On his head is a golden crown, which represents wisdom, and he is garbed in royal robes, symbolizing passion for life and energy for challenges.

In his right hand, he clutches an Ankh, and in his left, an orb.  You will notice that his legs and feet are wearing a suit of armor, and he fixes you a piercing stare.

The Emperor tarot is number four in the deck, and is the card for self-discipline and self-control. It signifies strong male influence, leadership, stability, and action. It suggests your path to growth and advancement.

Whatever the catalyst for change, it shows the inner strength that you possess that will force you to act and lead.

You don’t question the Emperor’s authority and ability to lead.

He is the perfect example that courage, personal determination, and rational thinking can result in victory and recognition, likewise with the Knight of Wands.

Through strength, the Emperor is able to create things, build families and communities, and provide them with support and structure.

The Emperor Tarot and Love

The Emperor clearly is the man who rules your life. He holds that special place in your life.

He provides you with a secure and abundant life, and you get to enjoy all the fruits of his labor. Without any doubt, he is the stronger one.

But because of your relationship with the Emperor, you start to possess your own kind of strength as well. There will be times when your roles will be reversed, and you will have to hold the fort.

You’ll see that it’s not actually a difficult thing, because you’ve had plenty of practice, and you learned from the best.

Nothing can faze you now. Everything else is just a walk in the park.

The Emperor tarot is a good card. It signifies that the Emperor does not have plans of going anywhere. He’s with you for the long run.

If the romance is new, you can do your little dance of happiness, because the Emperor means action, commitment, and stability.

The relationship will continue to thrive and your partner will lavish you with love, care, and support.

But the Emperor in the reverse position implies that your man is the complete opposite. With him, it’s always a case of ‘Now you see him, now you don’t’.

In fact, there’ll be days when you’ll start to wonder if you’re still in a relationship.

There’s also an issue with his temper. It’s a volatile relationship, and being around each other drives the other up the wall. It’s just a matter of who loses their sanity first.

The Emperor Tarot and Money

When the Emperor tarot shows up in a spread with regard to career or finances, this can be a sign that you’re working too hard, or you’re working your people too hard.

It’s possible that you’re starting to be a little bit tyrannical at work. Stop being the boss from hell and remember that being too strict or demanding can affect productivity.

When it comes to spending, you have to loosen up and enjoy the money that you earn. You don’t need to be controlling when it comes to your own spending habits.

What’s the purpose of making money if you won’t spend it from time to time? Spend it wisely on your health, your home, or your family.

The Emperor Tarot’s Meaning for the Future

When the reading is for the future, the Emperor tarot signifies that all the events that are happening now are the things that will give you strength and stability in the future.

But you should not attempt to change yourself or your decisions. You must always stay true to yourself.

It’s quite a tricky position for the Emperor to be in. After all, the smallest decisions can affect the future.

But what the Emperor tarot can provide you is to welcome change like the fierce warrior that you are, and to carry yourself in a manner that will make everyone proud. It’s entirely up to you whether you will surrender, flee, or defy.

If you take the initiative and embrace change, this can lead you a step closer to your goal, notwithstanding bearing the responsibility of your actions.

There will be plenty of opportunities for you to lead, so don’t ever forget about those who follow you.

The Emperor and its Meaning for Health

The Emperor is a major arcana card that tends to be linked to the idea of an older man and a sense of stability in your life.

This will clearly then mean that there is the concept of wisdom and intelligence surrounding the card, so it is certainly viewed as being rather powerful while also being quite relaxing at the same time.

When it comes to the area of your health, then the Emperor in the upright position is going to often indicate that you are guilty of being rather too hard on your own self and that this is something that has to stop.

This could also show that you have been trying to do too much, either with work or even with exercise, and that you need to just tone it down a bit.

There is also a sense of it telling you that you need to be paying closer attention to your energy levels and do not fight against them through sheer will-power and determination.

Instead, it wants you to work more closely with them and what they are trying to tell you.

Also, if you have been suffering from an illness or injury recently, then it tells you to drop the idea of just fighting through things and to actually apply some logic to whatever it is that you are doing.

Pushing yourself to the limit is not always going to be the best thing for you to do, so the wise old man is advising you to perhaps try a different approach.

If you draw the Emperor card in reverse, then that does not mean that your health is going to be poor or that something bad is on its way.

Instead, it is strengthening the idea that you could be trying to do too much and that this is going to be causing you additional stress that is just not required.

It tells you to ease back a bit on your routine and to remember to look after yourself a bit more. This involves relaxing and taking a time out rather than trying to go 100% all of the time.

It may also be the case that you have lost some of your discipline or that this discipline is misplaced and that in itself could lead to problems further down the line if it is not rectified.

Overall, what the Emperor card is trying to do when it is drawn in your health sector is to provide you with a sense of wisdom and experience to your health and to listen more to what your body is trying to tell you.

Just being stubborn and pushing on through everything is not always the best approach to take and having a rest of just pulling things back a bit is going to be in your best interest.

The Emperor card is there to help you, and if you listen to what it is telling you then you will undoubtedly benefit from it now and in the future as well.

My Final Thoughts on the Emperor Tarot

The Emperor tarot is often a good card, because more often than not, it indicates being with somebody who has more strength than you.

He is usually someone who is worldlier and occupies a higher and more prestigious position in society.

If you love living the good life, it certainly won’t be a problem for you to be with a strong and authoritative figure.

If you are okay living in the Emperor’s shadow while having the life that people can only dream about, go right ahead.

You are not a threat to the Emperor, but you will also be a bit of an outsider.

Because you may be sharing a life together, a life where he provides and protects, but he will never completely and fully share his world with you.

There will always be that invisible barrier that will not let you through entirely. Being on the outside, however, provides you with the opportunity to reinvent yourself.

You might as well do, because no matter what you do, change is going to come for you.

Does the Emperor card keep appearing in your spread? Maybe it’s time to take a long and hard look at your life?

Our latest articles on Recommended

What is my numerology by date of birth?

How can I calculate my Numerology Number?

What is the rarest aura color?