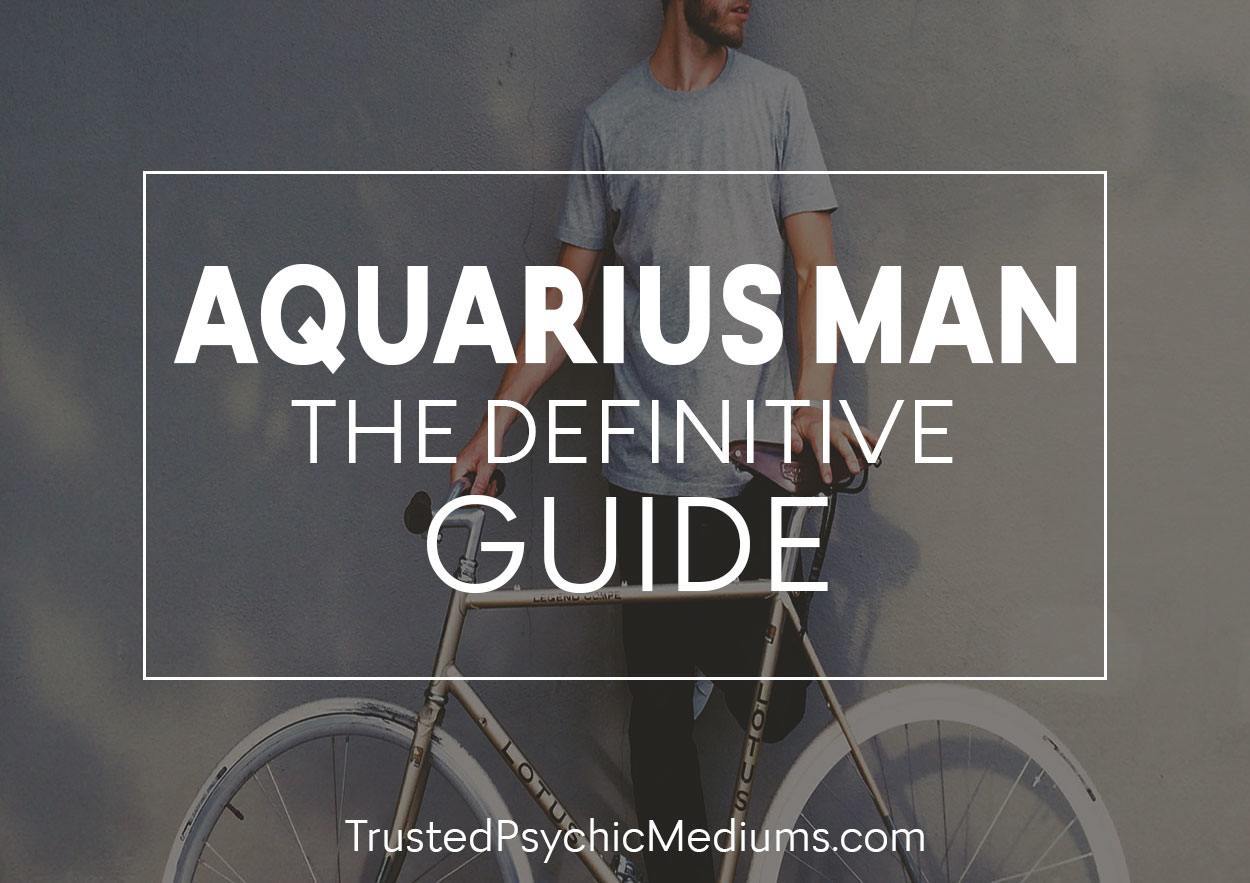 The interesting thing about the Aquarius man is that he is as big of an idealist as the Virgo.

The Aquarius man is somewhat different. His idealism focuses primarily on emotional idealism. This can be a good thing and a bad thing.

On the plus side, Aquarius people expect a lot of emotional authenticity.

There’s just something warm, fuzzy, and accepting about their personality.

On the other hand, they can be quite delusional in how they perceive other people. It’s not uncommon for the Aquarius man to stay in a rotten relationship just because he imagines his partner to be something that she’s not.

He might tell himself that, eventually, she’s going to change and come around. In reality, there is almost no chance of that happening.

As a result, he ends up ruining both their lives.

He sticks around when he should let her go. She, on the other hand, languishes in the relationship because he seems to be an emotional doormat. Do you see what’s wrong with this picture?

Just as it is foolish for the Aquarius person to judge the world based on the ideals of a world that doesn’t exist, the Aquarius man’s idealism in the realm of emotions can be very problematic as well.

Here is the definitive guide to the Aquarius man.

Love is probably the Achilles heel of the Aquarius man. If you’re an Aquarius man, you just better hope that you pick the right person to love.

Otherwise, if you pick the wrong person, you are essentially condemning yourself to an emotional hell.

The worst part of it all is you have the key to your freedom in your hands, but you refuse to turn the lock and walk out of your jail.

This is a very common trap many Aquarius men find themselves in, when it comes to matters of the heart. They tend to imagine their partner to be a completely different person than she truly is.

It is no surprise then that many Aquarius guys are very easy to cheat on. The woman in their lives must do something very blatant for the Aquarius guy to get a clue.

That’s how clueless and thick they can be when it comes to love.

It is no surprise then that jaded Aquarius men tend to cheat. They know that they sometimes put their love partners on such an emotional pedestal that there is a high chance they can be hurt.

As a result, they’d do the hurting first rather than be the ones who get hurt. Of course, these are the more immature Aquarius men who think like this.

Regardless, this is a very serious problem. If you want to be happy, if you want to live your life to its fullest potential, you need to get over this hurdle.

You have to fall in love with your eyes open. You can’t imagine things into your relationship. You can’t look at your potential partner as an ideal person.

You really can’t, because it’s a slippery slope for you.

If you’re an Aquarius man, it’s very easy for you to read in all sorts of positive things into your romantic partner. The sad thing is that most of these things don’t exist.

Instead, look at people and appreciate them based on who they really are.

If you are able to take this basic step, you can fix your biggest problem. You have no problems with most other parts of your life. However, your love-life can be your undoing.

Since Aquarius men tend to live based on emotional ideals, once you get them to commit, you have a partner for life.

They can be extremely loyal if you are clear about your loyalty.

Also, if you are very public with your affections and emotions, it’s very easy to draw them close to you.

The interesting thing about Aquarius men is that they commit really early. Also, unlike other signs of the horoscope, when they commit, they commit all the way.

It’s like getting a very loyal dog. You can’t seem to shake this dog off.

In many cases, a lot of confused and outright malicious women would exploit Aquarius men. Seriously.

As mentioned above, Aquarius men can be very loyal. It doesn’t take much to gain their loyalty.

However, if they feel that you’re insulting their intelligence or you’re bribing them, they can easily be turned off. This doesn’t mean that they become your enemies. Thank goodness for that.

However, what this means is that it’s going to be impossible to be their friend.

They can be hot and cold. This is worth noting.

If you want to be friends with an Aquarius man, you have to make sure you are transparent and you are sincere. If they notice some sort of insincerity or they feel that you’re trying to use them, they’re going to back away from you.

The good news is that once you get them to become your friend, they can be friends for life. We’re not talking about friends who are fair-weather friends.

We’re not just talking about friends who are great to be with when things are going well in your life. We’re talking about real friends.

We’re talking about friends who will be there for you when you are going through hell.

Oftentimes, they are the last friend who will stand up for you. They will undergo all sorts of ridicule and oppression just to stand by you. Now, that is a real friend.

Since Aquarius men live in an ideal emotional world, lovemaking is one of their strongest suits.

Lovemaking, after all, is mostly emotional. Sure, there’s a physical component. Nobody is arguing about that.

However, if you are looking for the most fulfilling and transcendent form of lovemaking, emotion is the key.

Emotional intensity and connectedness are what makes a lovemaking an almost spiritual experience. Also, if you are a woman looking for multiple orgasms, you might want to look for an emotional intercourse.

When it comes to an emotional intercourse, Aquarius men have that all figured out.

Usually, Aquarius men who are really great bed partners tend to be older.

Unfortunately, when it comes to weaknesses, career choices tend to be the Waterloo of Aquarius men. They tend to make bad decision after bad decision.

As I have mentioned earlier, they tend to live in an ideal emotional world. This is why they tend to be quite prideful.

When that isn’t met, they can be very proud, and would often cut off their nose to spite their face.

It’s not uncommon for an Aquarius man to quit an otherwise lucrative job just because he felt that his pride got stepped on.

It’s not uncommon for an Aquarius man to quit a career because he felt that he’s not getting appreciated enough. This is the chink in your armor.

If you’re an Aquarius man, you need to get over this very quickly.

You have to understand that pride can push you to greater heights, but it can also push you over the cliff. Your pride can destroy the great things in your life.

Otherwise, you can make very disastrous decisions, especially when pride kicks in. This often takes place in the context of your career.

Aquarius men aren’t really known for being good with money. Don’t get me wrong. I’m not saying that they can’t save.

What I am saying is that they can make bad decisions when it comes to growing money.

You have to remember that simply saving money isn’t going to do you much good. Why?

Thanks to the power of inflation, you need to constantly think of ways to grow your money.

What’s the point of saving money when that money is basically going to rot, given enough time?

Unfortunately, when it comes to investments, Aquarius men tend to make all the wrong decisions. They’re very easy to manipulate emotionally.

This is why they can make for easy targets for fast-talking investment sales advisers.

If you’re an Aquarius man and you’re looking to grow your money, you need to read up on making proper investment decisions. As I have mentioned earlier, you don’t have any problems saving.

Your problem is in growing your money.

Not only is your money not growing at the rate of inflation, you’re getting taxed on whatever interest income your money generates.

Stay away from the bank. Instead, focus on picking the right investments that will grow your money over time. You might want to look into stocks, bonds, or real estate.

Aquarius guys are very idealistic emotionally. The good news is that they are so idealistic that they aim to be the best fathers and best husbands. This makes them great family men.

In many cases, Aquarius men look at the birth of a child as another chance of correcting the wrongs of their own childhood.

For example, if an Aquarius man had a father who abandoned him either physically or emotionally, you can bet that he will resolve not to commit the same mistake with his own family.

In fact, this is the biggest blessing an Aquarius man can give his family.

If you disappoint him enough times, then he just drops everything and loses interest. In a way, they can be hot and cold.

My Final Thoughts on the Aquarius Man

The Aquarius man has the raw ingredients for greatness. He really does.

By living in an emotional world that is very sensitive and intense, he can be very creative. He can make all sorts of things happen.

The big challenge is to not read so much into his love relationships. If he tries to romanticize potential love partners, he might end up picking the wrong person.

Their big downfall is when they pick the wrong love partner. This can really turn their worlds upside down.

When they pick the wrong person to fall in love with, that person can really bring out the worst in the Aquarius man.

Be very careful when it comes to matters of the heart.