Capricorn: 3 Signs It Might Be Time to Leave Your Relationship 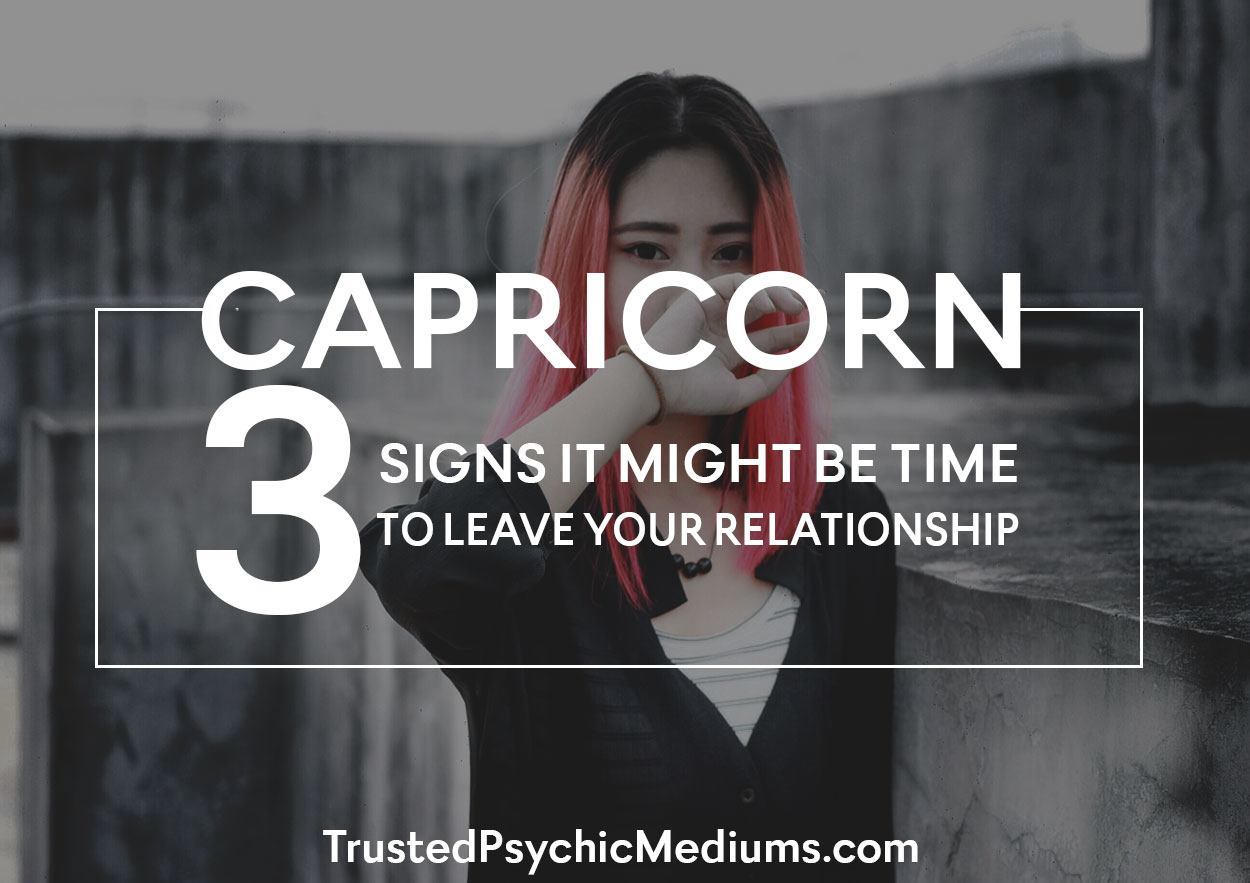 Virgos, for example, are perfectionists. Aquarius people tend to believe in emotional extremes. Pisces people, on the other hand, have this often unrealistic emotional map of the world.

There is no such thing as a perfect horoscope sign.

In fact, what makes us attractive is our imperfections. What makes us worth loving is how far we are from perfection.

You have to keep this in mind when reading the discussion about Capricorns and relationships below.

Here are three signs it might be time for Capricorns to leave their relationships.

One of the best things about the Capricorn is that they are ready, willing, and able to commit. Given the right time and context, Capricorns can commit.

This says a lot. In this day and age, people tend to run away from commitments.

People often look at commitment as a drag. It is a chore or a very negative thing that produces disadvantages over a long period of time.

At the very least, you feel you’re cheating yourself from a whole world of possibilities by being stuck with one obligation.

This is especially true when it comes to relationships.

In fact, many Americans think that a long, committed relationship is the opposite of freedom.

Capricorns don’t have this problem. In fact, they can easily commit as long as they see a compelling reason to.

The problem with a Capricorn is not commitment.

The problem is that they may often end up at the losing end of the relationship.

They might be putting more than they’re getting out of the relationship.

Of course, this is not the best way to look at a relationship. You shouldn’t look at any relationship as some sort of give-and-take situation.

You don’t go into a relationship expecting it to produce only benefits.

That is the proper way to look at a relationship.

Unfortunately, if you’re an immature Capricorn, it’s easy to commit to a relationship thinking that you will be getting more than what you would be putting in.

If this is how you look at your relationship, you are going to lose. You’re going to feel frustrated, ignored, or taken for granted.

Eventually, it would be easy for you to stray or to cheat on your relationship because you feel you’re getting a better return elsewhere.

The best workaround is to stop defining your relationships as arrangements where you get something in return for something else.

You have to look at it as being a member of something larger than yourself. It’s something you can commit to.

This is the proper way to judge a relationship.

If you reach a point where you notice that the relationship is not something worthy of your loyalty, then that is a completely different matter.

In that situation, it’s a good idea to start thinking of leaving the relationship. It’s not worth your loyalty or your lifelong commitment too.

Cheating in a relationship has many different levels. The most obvious level of course is physically cheating.

If you see your boyfriend or girlfriend with another person, that’s obviously cheating.

Obviously, that person is violating your trust, taking your for granted, and not giving you the respect that you deserve.

However, there are less visible ways of cheating. In fact, cheating in broad terms doesn’t even have to be with other people. It can be with an idea.

For example, if your girlfriend always compares you to her past boyfriend, that is a form of cheating as well.

She may not be physically making love with that person from the past, but she’s holding that measurement from the past against you.

In other words, you are forced to fight a battle that you’re not going to win. How can you win against an imaginary picture or a ghost?

The problem with the memory of a dead relationship is that we can read so much into the past or the dead. In many cases, we make people out to be more heroic than they truly were.

We make our past, dead relationships more meaningful and happier than they truly were.

This does nobody any favors because everybody suffers. Your relationships suffer because it’s held up to a ridiculously high standard.

The best way to work this out is to simply talk about it.

Make a clear point about the fact that you cannot be measured against something that doesn’t exist.

An ideal is an ideal because it’s in a world of ideas. You have to be realistic about your expectations.

There’s nothing in it for you. You’re struggling with something that doesn’t exist. You’re fighting with a ghost.

This is the worst form of cheating.

Capricorns are nothing but goal-directed people. The Capricorn is of course one of the most solid earth signs in the horoscope.

You love goals. You feel that your life is meaningless without goals.

However, if you don’t share the same fundamental goals as your partner, you might be wasting your time in your relationship.

Why would you devote more time, energy, and resources into your relationship when it’s going to end in a destination that is very different from the destination you have set for yourself?

This is a very basic question.

Unfortunately, many Capricorns are so afraid of being alone that they try to duck this question. They try to avoid it at all costs.

Unfortunately, you’re not getting any younger. For every day you spend in a relationship that is obviously headed to a place you don’t want to go, you’re wasting a day of your life.

It’s much better for you to have a long, hard talk with your partner regarding goals.

If you still cannot reconcile your goals, it’s much better for you to leave the relationship.