Capricorn: Five Signs You Are Misinterpreting His Feelings 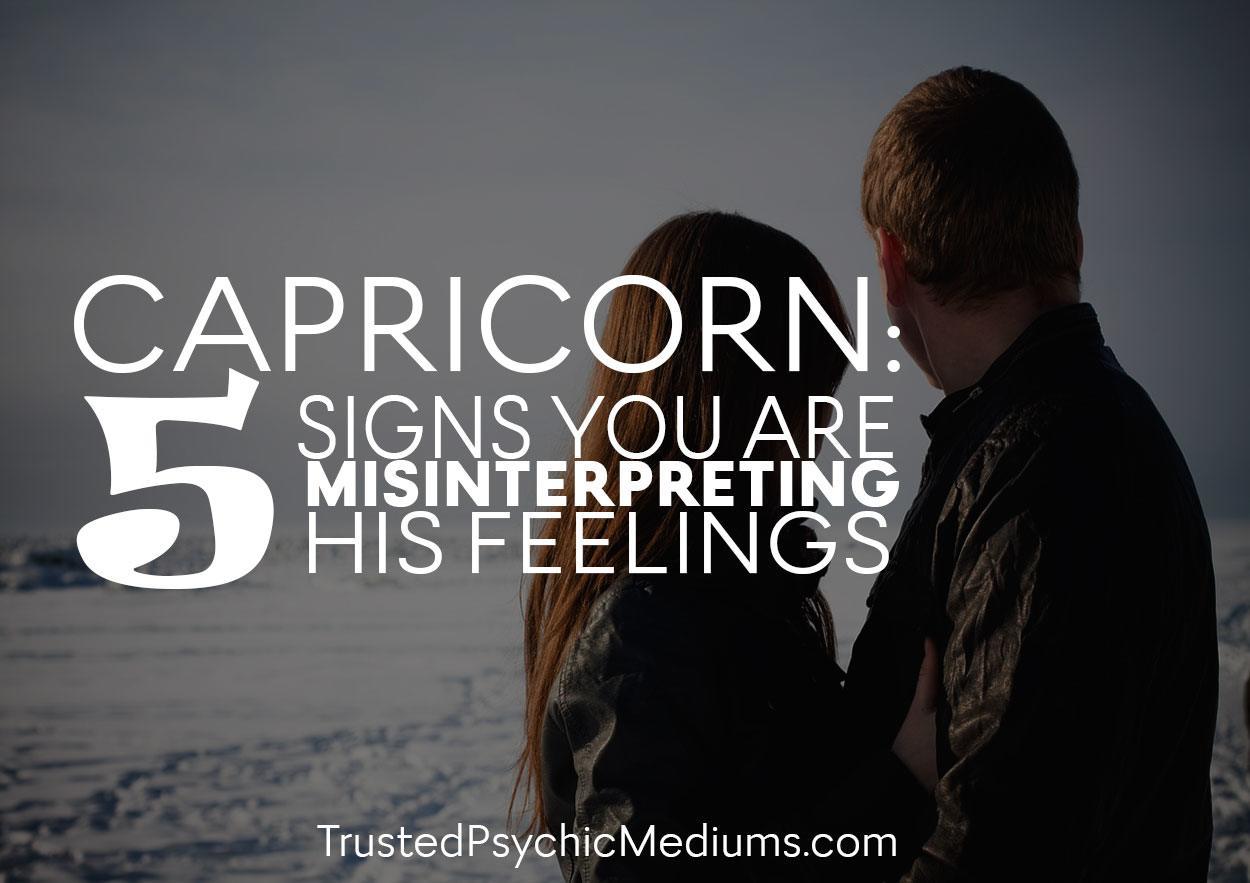 If you are a Capricorn woman and you are looking for love, you have your work cut out for you.

As a materialist sign, it is very easy for you to get trapped into all sorts of social signals that end up with you misinterpreting situations.

What I am trying to say is that you can misinterpret a guy’s feelings and end up with the wrong guy.

Alternatively, you might misinterpret other’s feedback or rejection and end up beating yourself up unnecessarily.

You have certain mental and emotional habits that get in the way of you attracting the right man.

A key part of this is where you misinterpret the feelings of others in a love relationship.

Here are five signs you are misinterpreting a guy’s feelings.

Do Not Equate his Bluntness with Being Mean

Guys can be blunt. Just like with any unvarnished truth, it is very easy to get emotionally worked up about honest assessments.

As the old saying goes, the truth hurts, but it is also true that the truth will set you free. They go hand in hand.

In many instances, the fact that the truth brings so much pain to the table makes its liberating power all that more appealing.

You have to understand how this works. This is why when you are with a guy, and he is very blunt about his feelings, do not take it the wrong way.

Do not take it personally. In fact, you can use that level of honesty to make yourself a better person.

You do not want to live in a world where people around you are walking on egg shells because they are afraid of hurting your feelings.

Instead, focus on honesty and celebrate it.

When somebody is being blunt to you does not automatically mean that he is being mean.

Sure, there may be many ways he can couch what he is saying in such a way that it does not hurt, but the truth is the more it hurts, the more likely it will register.

This is especially important for earth signs such as you because oftentimes it takes a while for things to sink in. Celebrate your partner’s bluntness.

Do not take it too personally.

You Often Blow Things Out of Proportion

If you find yourself blowing things out of proportion quite a bit, this is a clear sign that you are misinterpreting your partner’s feelings. Which is also why you need to exercise three things when it comes to dating.

You might be assuming the very worst. You are hardly alone.

If you are a Capricorn woman, you tend to look at emotional signals in the worst possible light.

You feel bad and you blow things out of proportion, and this provokes him to send even more negative signals, which then forces you to make things even worse.

This can go on and on until you grind each other down. This is not exactly a recipe for a mutually fulfilling relationship. You might want to do yourself a big favor by not blowing things out of proportion.

Keep a level head and try to address the signals he is sending out based on their own merits.

Do not try to read too much into them.

You Often Read What He Says in the Worst Possible Light

Take it for the blessing that it is. Do not try to put your own spin on it.

If you do, you will often put the worst spin and make things worse than they already are.

By being level headed, you can do a lot to diffuse the situation and really get down to the bottom of what he is trying to say.

If you are able to do this, then you will be able to actually communicate instead of simply engaging in a vicious cycle of blowing up at each other.

As a Capricorn, you often end up judging your partner instead of perceiving him.

There is a big difference between judging somebody and simply perceiving that person.

Simply pay attention to his actions, and you would see that there is a big disconnect between your moral and emotional judgment and what he is actually doing.

In many cases, his actions are actually quite neutral.

You Interpret his Feelings Based on What Others Say

It is bad enough that you tend to blow things out of proportion, and you look at things in the worst possible light.

Things make a turn for the worse when you factor in what other people have to say. You have to remember that a lot of people around you are haters.

A lot of people are simply jealous or envious of what you are doing.

Not surprisingly, if you filter what they say through this lens, it is very easy to come up with negative conclusions especially in the months ahead when it comes to love.

Stop interpreting his feelings based on what others say. Focus on what you can see with your own two eyes.