Capricorn: Five Questions to Ask Yourself Before You Get Married 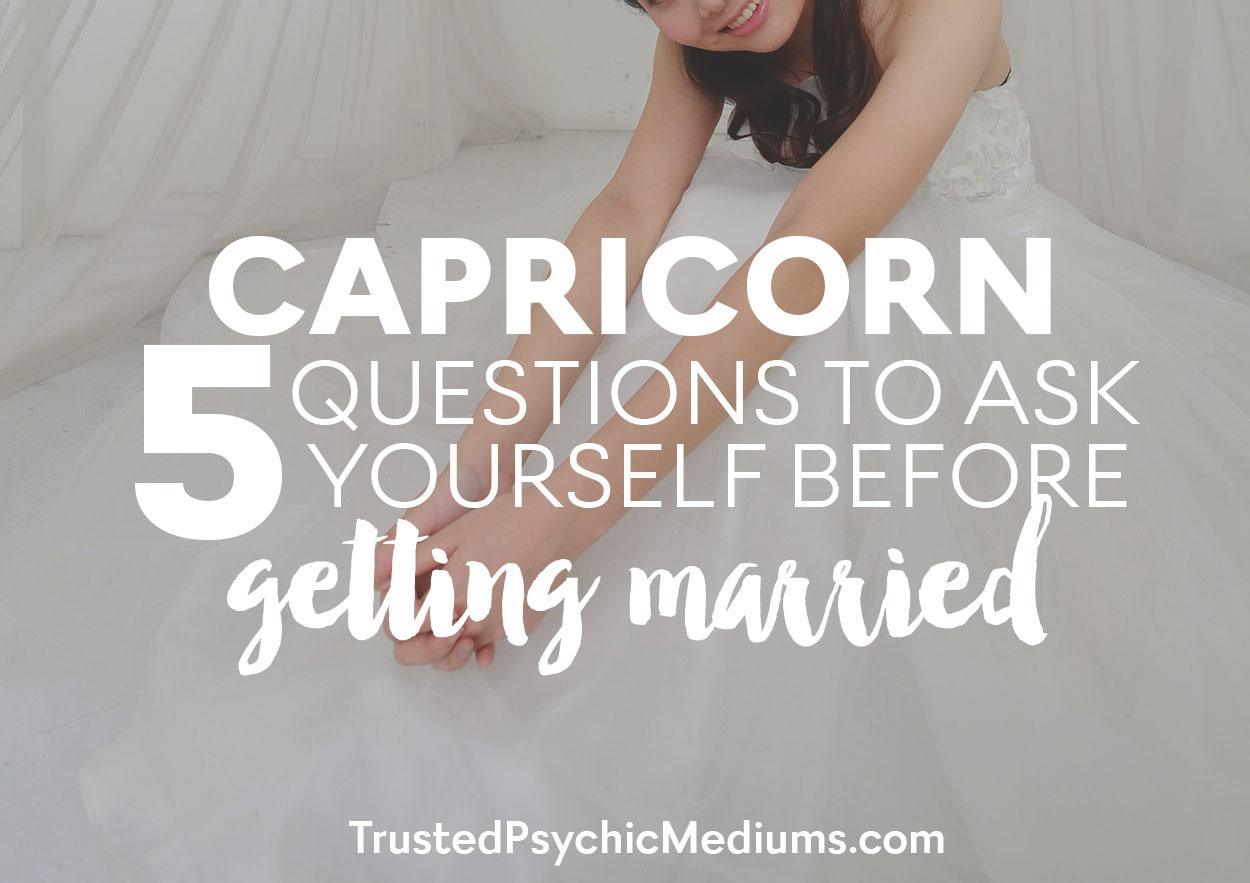 The interesting thing about Capricorn sand marriage is that many Capricorns really look forward to getting married.

You have to remember that Capricorn men and women prize stability. They’re very conventional thinkers.

Just as you were born, you grow up, you go to school, you graduate, and you get a job, you’re also supposed to get married at some point in time.

As conventional as the typical Capricorn is, they are not dumb.

Capricorns are quite perceptive. They are not slaves to impulse.

With that said, Capricorns are also seekers of stability. They would rather sacrifice a lot of happiness just for the stability of an arrangement.

It is no surprise then that the prospect of getting married can open up lots of confusion. It can be quite disconcerting for the typical Capricorn.

The Capricorn person might even think that this is quite an unusual state of emotion to be in. After all, the Capricorn, being a typical materialist sign, tends to plan out their lives.

They tend to look at their lives as a series of steps.

Step 1 is, of course, growing up. Step 2 is getting a career going. Step 3 is getting married. Step 4 is retirement, and so on and so forth.

However, if you are a Capricorn and you want to make the right decisions, you have to be very methodical and systematic.

You really can’t rely on your instincts and emotions like other horoscope signs.

Most of the time, if you were to allow yourself to lose yourself in the moment, you would make the wrong decision. You know this much about yourself.

This is why you need to ask the five following questions before you get married.

Getting married is probably one of the biggest decisions you will ever make. If you pick the wrong person to marry, it can set you back.

In fact, the impact may be so great that you may never fully recover.

You need to choose wisely. And you need to proceed with caution. Ask yourself the five following questions.

What Life Do I Want for Myself?

You need to ask this question to override a typical Capricorn tendency.

Capricorns have a tendency to go on auto-pilot. They tend to inherit the grand visions and dreams of people around them.

Most notably, they would inherit their parents’ dreams for their lives.

In many cases, Capricorns like the stability of going down a path that has already been set for them by somebody else.

Most of the time, this is their parents.

However, when it comes to getting married, you can’t rely on this. You can’t just choose to get married because your parents are married.

Instead, you have to ask yourself, “What life do I want for myself?”

You have to really wrap your mind around this question. “What life do I want for myself?” Put in another way, what kind of life do you want to create for yourself?

The question here is about yourself. This is all about you.

This is very important because if you see no changes, then you’re not ready to get married.

What Life Do I Want for my Spouse?

It’s very easy to assume that we know what we want for ourselves. Nine times out of ten, we’re completely clueless.

By thinking of the life that you’re going to be sharing with somebody else, maybe you would be forced out of yourself.

Maybe by phrasing the question this way, you would be forced to think of your decision’s impact on other people.

That’s the wrong way to look at marriage.

This is a lifelong commitment. If you can’t get to the core of the matter thinking of it in terms of yourself, focus on other people.

Do I Want a Family?

In America, just because you get married doesn’t necessarily mean you should or would have children. Children are optional in the United States.

This is not always the case in other cultures. There is a strong social expectation that if you get married, children must immediately follow.

Thankfully, we don’t have this problem here in America. Still, we need to confront this issue.

Do you want to start a family? You have to be serious about this. Do you really want children?

You have to understand that children require a high degree of commitment from you.

It requires a lot of patience. It also requires quite a huge amount of resources.

If you want your children to turn out to be high quality human beings, you must be ready, willing, and able to put in the resources.

You have to have the right infrastructure financially, emotionally, and physically, to give them the firm grounding they need to turn into great people.

How Much Am I Willing to Sacrifice for My Family’s Happiness?

It’s very easy to be single. It really is. Why?

You have to understand that you’re going to be saying goodbye to a lot of that once you decide to get married.

Once you decide that you’re going to have a family, you might have to say goodbye to all of that. Your sense of personhood might be absorbed into the marriage and into your family.

Am I Prepared to Give Married Life My Full Time and Attention?

In many cases, when you get married, your old self and your partner’s old self die.

Are you ready for that? Do you have the time, the attention, and the emotional depth that the new self requires?

These are serious questions you need to ask because they really force you to step out of yourself and step out of what’s convenient.

Instead, you focus on what truly is important.