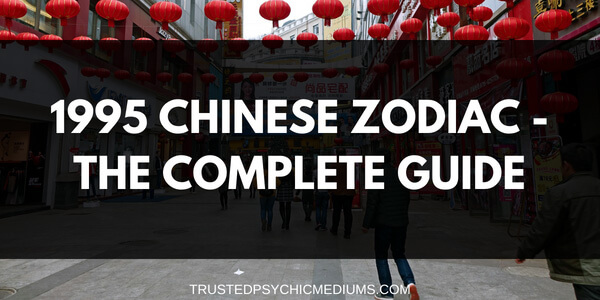 In the Western world, the Pig is seen as a bit of a grubby, smelly, messy animal – so people who are exploring the Chinese zodiac sometimes feel put out upon discovering that this is their symbolic animal.

Yet in China and the Far East, the Pig represents something else entirely – something much more wise, noble and worth feeling proud to be characterised by.

So, if you have questions about the 1995 Chinese zodiac – the Year of the Pig – say no more. This guide will help you come to a deeper understanding of why this is a symbol to be proud of.

Personality type of the 1995 Chinese zodiac

People born in 1995 are born under the sign of the Wood Pig from the Chinese zodiac, assuming their birthday falls beyond Chinese New Year. If not, they are instead the Wood Dog, the Chinese zodiac symbol that rules much of 1994.

The Pig in Chinese astrology is characterised by patience as much as perseverance, and friendliness as much as a love of life’s little pleasures.

However, these people are not afraid of hard work – but rather know that it’s healthy to take their time and mix work and play in a decent balance to find life the most enjoyable.

The Pig is the twelfth of the twelve Chinese zodiac animals – and that means that, according to the mythology behind Chinese astrology, the Pig was the last of the animals to finish the Great Race.

In some tales of this legend, the Jade Emperor – ruler of the gods of ancient China, and the organiser of the Great Race to see which animals would attain a zodiac year in his calendar – was confused as to why the Pig finished in twelfth place.

Pigs are stronger and faster than we often give them credit for, after all, and the Jade Emperor knew this.

Yet as the Pig explained, he had enjoyed a delicious meal en route to the finish line and fallen asleep thereafter.

Despite being apologetic, the Jade Emperor couldn’t help but chuckle at the Pig’s love of indulgence.

So too today, people born in 1995 are known for being fond of treating themselves, but also able to make sure they get the job done in the end reliably.

In fact, people born in 1995, the Year of the Pig, are regarded as very good at handling money, and also highly trustworthy in completing projects.

Some say that, just as the Pig finished the Great Race by his arrival, Pig people are the best ones to trust in putting the finishing touches on a project.

They can also be relied upon to finish things started but not aptly wrapped up by other, more impetuous Chinese zodiac signs.

In personal relationships, people born in the Year of the Pig, 1995, are kind and generous.

They are a curious sort of people, always happy to exchange ideas and perspectives with people from other cultures and walks of life, and expand their own understanding because of it.

Pig people are also patient enough to be solid friends to those in need, and can be relied upon in a crisis.

As we touched upon just above, people born in 1995 are the Wood Pig sign in Chinese astrology. In the Chinese zodiac, there’s more to a personality than just one of the twelve animals alone.

The elemental flavour of the given year also rounds off a given animal’s persona nicely, and in the case of the Wood Pig born in 1995, it’s an advantageous mix.

That’s because Wood in Chinese astrology is an element of compassion, creativity, versatility and thoughtfulness.

It’s noted that many people born in the year of the Pig under other elemental rulers are somewhat prone to live in the moment a touch too much, overindulging in pleasant pursuits.

Not so for people who are born in 1995 – the Wood Pig in the Chinese zodiac blends a pragmatic touch with an upbeat personality that never lets challenges overwhelm them.

This is, as you might expect, a wonderful mixture of aspects for career success, as much as good fortune in love and personal projects.

We could all do with the courage and tenacity to see our dreams through.

Those born as a Wood Pig in 1995 in Chinese astrology are often quite gifted as harmonious teamwork.

They are people able to see the talents of each individual making up a team or a group, and put their own skills to work in helping everyone pull in the same direction.

The Wood Pig is someone very adept in customer service and working sympathetically with others too – a true asset to any business.

Best love matches for the 1995 zodiac

People born in 1995, Year of the Pig, are not always the most emotional or demonstrative of lovers in the strictest sense – but just because they may not show it, it doesn’t mean they do not feel it!

As a Wood Pig, there is extra sentimentality and a touch of shyness in play here too for souls born in 1995 in Chinese astrology.

A match between the Pig and the Goat in Chinese astrology is generally viewed as one of the most positive matches around.

Both of these people are loving and compassionate, but prefer to express that behind closed doors – often in sensual ways that would raise a few eyebrows if people knew their private secrets.

This physicality is matched by mutual patience and affection, however, giving plenty of substance to help the relationship last.

The love match between Pig and Tiger in Chinese astrology is also viewed as extremely blessed, combining the fast moving ways of each of these star signs with complementary opposing energies.

For example, the Tiger is apt to leap head first into things with bravery, keen to make a big entrance.

The Pig can temper his or her partner’s energy with a slower and more methodical outlook that ensures none of the details are missed – and feels very desired, thanks to the Tiger’s passion.

Another of the best matches for people born in 1995 is the match of a Pig and a Rabbit.

There can be a sense of shyness to them each that makes the relationship slow to get up to speed, but once it does, both of these partners are warm and loving, but also loyal to one another.

This is a relationship in which shared plans often form in gentle accord with one another, and is good for those seeking a peaceful romance free from too much drama.

Wealth and fortune for the 1995 Chinese zodiac

People born in 1995, the Year of the Wood Pig, are often extremely likeable and very naturally talented at attracting friendships – personally, as well as in business.

There is next to nothing underhanded in how the Pig approaches his or her career, and those looking to shake hands over a new deal are wise to place their trust in someone born in 1995.

People born in the Year of the Pig are known to be wise in how they invest the money that they make.

Thanks to their slow and steady approach, and talent for finishing the sometimes undesirable tasks other people would prefer to avoid, they quickly become known as reliable and willing to get the job done, wherever they work.

Of course, the Pig is also an indulgent character, and the temptation to enjoy one’s wealth through pleasures and excess can sometimes be too strong to resist.

Having said that, people of the Wood Pig year of 1995 are gifted with an innate sense of knowing when they are close to coming too far, and they can always course correct and ensure that their fortunes remain favourable over the long term.

Much of Chinese astrology has to do with luck and good fortune, but it’s not seen as something fleeting, passive or tricky to pin down in the same way we see luck as something capricious that comes and goes in the West.

Instead, attracting good luck is taken pretty seriously in the Chinese zodiac, and the lucky symbols and numbers for people born in 1995 are well worth keeping in mind if you’re looking to draw good fortune into your life.

In fact, you might well find you have been subconsciously drawn to some of these numbers, colours and symbols already.

Financial windfalls that head the way of people born in the Year of the Pig – and they tend to be plentiful – often contain some or all of these numbers in their overall figure.

Of course, there are also more unlucky numbers for the Pig to consider, such as 1 and 7. The fact that these are such common numbers in our society does nothing to dissuade from that.

Interestingly, one is said to be the loneliest number – perhaps symbolic of how people born in the Year of the Pig much prefer to be among others than alone, and accomplish their best feats this way.

Lucky colours for people born in 1995 are wonderfully subtle. Grey, gold and brown are all lovely hues with which the Pig personality feels a special affinity – the only more vibrant exception here is yellow, a lucky colour for the Pig in Chinese astrology also.

Less lucky colours include red, blue and green – strong, instantly recognisable colours that the tender spirit of the Wood Pig perhaps finds too bold for their tastes.

3 unusual facts about the 1995 Chinese zodiac

Thanks to the added flavour and feel of the ruling element of 1995, the Wood Pig enjoys some intriguing facts and characteristics that shine down upon them thanks to Chinese astrology.

Some of these are just for fun, but others add a deep understanding to the overall character of the Pig personality.

Firstly, as we touched on before, an unlucky number for the Pig is the number 7. However, in Western civilisation we regard the number 7 as very lucky.

Because of this, people born in the Year of the Pig often feel a strong resistance to this idea for reasons they can’t really explain.

And of course, they might find that 7 brings them anything but good luck!

Secondly, never underestimate just how many different kinds of career a person born in 1995 as a Wood Pig can turn his or her hand to.

However, no matter how challenging the road to qualification could be, the Pig is patient and smart enough to make their dreams come alive – and be of remarkable service to their community.

Thirdly, the Year of the Pig is one that, across the ages, has welcomed plenty of famous faces.

Those include soul musician Amy Winehouse, spiritual thought leader the Dalai Lama, and even monarchs of old, such as King Henry VIII of England. The Pig is in good company with more modern celebrities too, such as Mila Kunis.

Chinese astrology is full of deep and intriguing mythology, and plenty of symbolism to help us understand the complex personalities that emerge year after year.

Yet the affable, companionable and overall pleasant personality of the Pig – born in 1995 – makes for a faithful friend and a thoughtful lover.

Because 1995 is the year of the Wood Pig, an ordinarily impulsive personality is balanced out splendidly by a sense of duty, community and creativity.

The Wood Pig soul is nonetheless warned to make sure that a fondness for indulgence and pleasure, as well as taking life in the slow lane, doesn’t cost them in the long run.

Luckily, these folks have a lot of insight into themselves and others by their nature, and are unlikely to overdo it in this way very often.