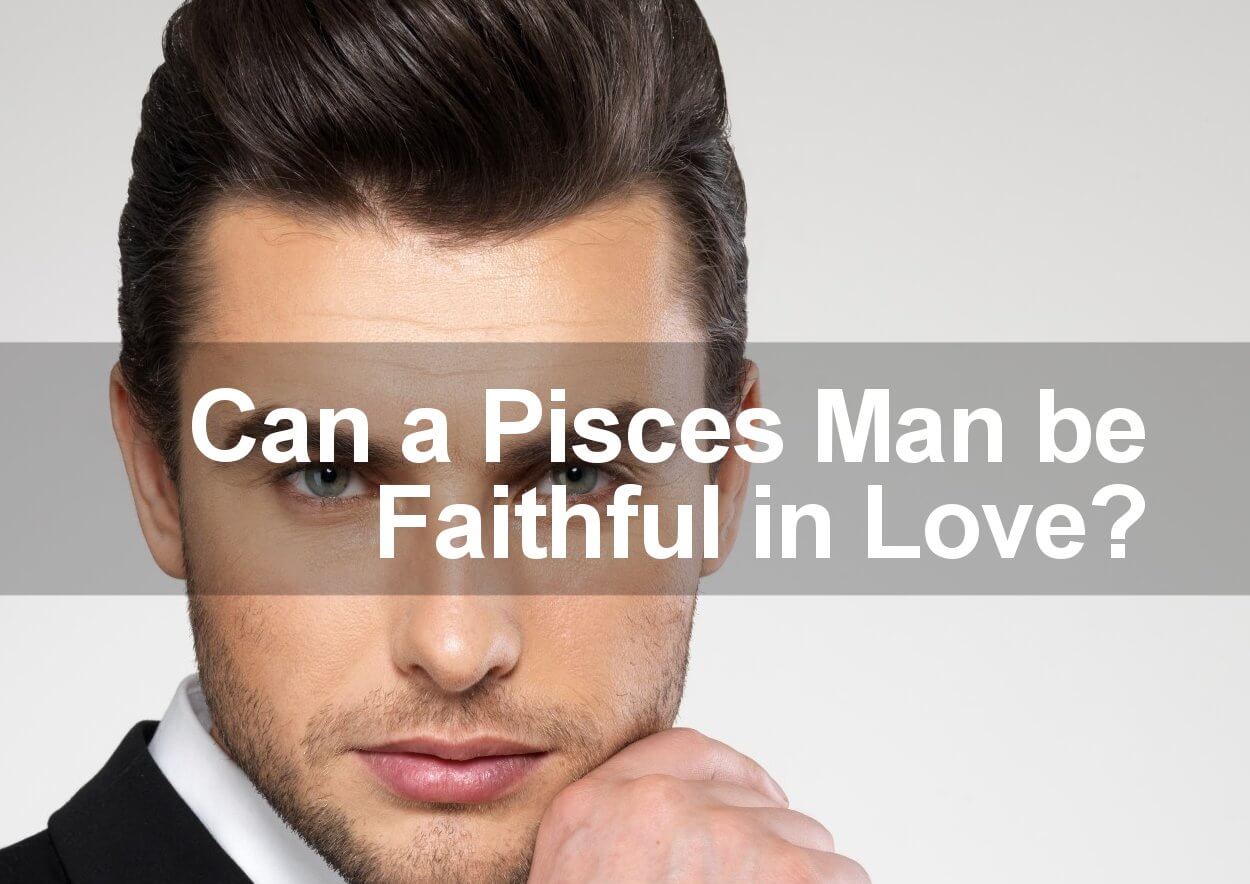 Can a Pisces man be trusted in a long term relationship? Are Pisces men faithful? These are not unreasonable questions to ask since Pisces men tend to have such a bad reputation when it comes to commitment.

You have to understand that Pisces guys are turned on by what they see. They are a visually aligned sign of the Zodiac and this is a key trait of almost every single Pisces man I have ever met.

If you’ve seen very good-looking women walking around with less than handsome men, it’s because those guys have a way with words. You can try to dismiss that situation based on how much money the guy has or some other hidden factors, but you’ll be surprised as to how far the right words can take a Pisces man with the ladies.

Men are graphic, women are auditory. Men are from Mars women are from Venus. That’s just the way the cookie crumbles so to speak.

With that said, it’s very reasonable to ask if guys who know how to talk to women on an emotional level can be faithful. I ask this in the context of Pisces men because Pisces men in general tend to be very good with emotional issues.

There are a large number of Pisces men who are able to say the right words at the right time under the right circumstances and settings to get into the heart of even the most ice cold woman.

If you are a woman in a relationship with a Pisces man, it’s very reasonable for you to ask the question, “Are Pisces men faithful?”

Of course, just like with everything else in life, the answer is yes and no.

It depends on who are you dealing with and under what circumstances. People change all the time. People go through many different phases in their lives to say that the answer to the question “Are Pisces men faithful” is a resounding yes or no really does no justice to the people involved.

As I keep mentioning in my reports, Zodiac signs are basically general directions where people’s lives are most likely to go. Where they actually end up is a complicated result of a complicated process.

The number-one complication in the world that we live in of course is human choice and human freewill.

While astrology can go a long way in predicting how things happen, it does so not because it overrides freewill. It does so because it’s able to see the general trends and tendencies of certain types of people.

You have to understand the answer to the question “Are Pisces men faithful?” based on this disclaimer.

These all impacts our choices, but at the same time we are born under different signs, and this tends to predict our behavior not because there is some sort of predestination or ironclad rule dictating that we should behave this way and live a certain life. No. Astrology is effective because it knows the broad outlines.

It’s like trying to swim against the tide of an ocean. If you know how the tides are moving, chances are, you’re right as to where people will end up.

However, you should never discount people who are good swimmers. That’s how I like to think of freewill against predestination and other forms of determination. The reality is it’s a mix of both.

So, are Pisces men faithful? Keep the following factors in mind.

Somebody can be faithful to you physically. However, you’d really be cheating yourself in a very profound and epic way if you define faithfulness purely in terms of an intercourse.

Just because your man doesn’t become physically involved with another woman doesn’t mean he’s faithful to you. You have to dig deeper.

The big project in life is to start simple but become something more developed. This involves developing our characters. If you are a rather undeveloped person, you would think that faithfulness can simply be defined as physical faithfulness.

Another level of faithfulness, of course, is intellectual faithfulness. This person might be with you physically and might even be with you emotionally but is that person really thinking about you enough that you can get the highest level of respect?

There are so many ways to cut this and the key to getting to the answer to the question of “Are Pisces men faithful?” is to first define faithfulness in such a way that it applies to you, and it makes sense to you.

If you noticed that they no longer believe this when it applies to you, then there might be issues regarding faithfulness to you. You know that they are being faithful to you when they try to hold you to a higher standard of emotional authenticity.

This is where many women who are in relationship with Pisces men stumble. They don’t understand that when their man holds them up to a high standard of emotional authenticity this means that they are asking themselves “Can I be faithful to this woman.”

If you don’t want to be held to that high standard and there’s really no incentive for your man to be faithful to you, this may seem warped. This may seem strange.

This may seem awkward, but this is the truth. You are dealing with highly emotional people. They might not wear their emotions on their sleeves.

They might not be crying all the time or have very thin skins, but make no mistake about it, under the calm exterior; there is a boiling sea of emotions.

So, it’s a good idea to walk very gingerly when it comes to issues of emotional authenticity and emotional integrity. There’s a reason why certain standards are being set in your relationship. It’s a good idea to pay attention so your Pisces man wouldn’t have any incentive to be unfaithful to you.