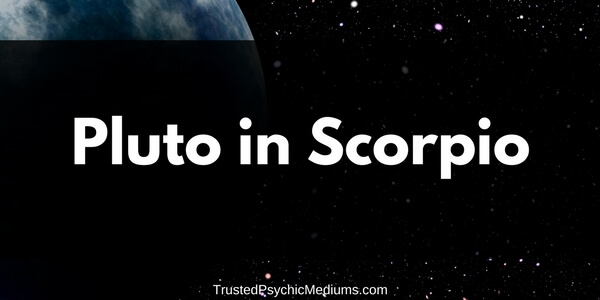 Scorpio is one of the only signs which we can be confident that we have seen Pluto move through twice! Pluto passed through Scorpio in 1746, leaving it in 1762, and it also moved through it again in the late twentieth century, entering in 1983, and leaving again in 1995.

Because of this, Scorpio is a sign that we know much more about Pluto’s behaviour in, compared to the other signs. Pluto is also the planet that rules the sign of Scorpio, meaning that they have many innate characteristics in common. The periods when Pluto was in Scorpio amplify the inherent characteristics of both the planet and the sign.

People born while Pluto was in Scorpio are highly intelligent, and driven by problem-solving and puzzle-solving urges. The period from 1746 to 1762 was the height of the Scientific Revolution and the Enlightenment, when science and philosophy were at an all-time high level of importance all over Europe and the Americas.

If you were born when Pluto was in Scorpio, you probably have a very skeptical, perhaps even cynical view of the world, because you have been exposed to so much more of it than previous generations. It is very hard to surprise you, and you take most new information in stride, seamlessly integrating it into your understanding of the world without difficulty.

People of this generation are often criticized for being anti-social, especially compared to the people born in the ten years before you. The truth is, you are just a lot more skeptical about people than your older sisters and brothers… and there is nothing wrong with wanting to focus on information and ideas over relationships, as long as you can find a balance that is healthy for you.

Women born with Pluto in Scorpio are highly intelligent, discerning, and have biting, witty senses of humour. They observe the world incisively, and are far better at making commentaries about it than other signs are. However, this can sometimes get them branded as jaded or cynical by older generations, especially the Libras just before them or the Leos from two cycles of Pluto before that.

Women born when Pluto was in Scorpio have complicated relationships with “traditionally feminine” things, and their relation to older gender roles depends greatly upon the individual person, and the unique forces at play in her chart. Some throw them aside very quickly, while others prefer to “reclaim” them, making the choice to adhere to standards rather than being forced into it.

Given how intelligent Scorpio women are, you can rest assured that, whatever decision a Scorpio woman makes about her gender roles, she has thought through it very carefully!

Women in this time have been increasingly drawn towards high-powered careers in politics, the sciences, and high-level academia. They feel very strongly about the importance of questioning authority and sources of knowledge, and so are drawn towards careers that allow them to do this.

One of the things that it is very important that women born when Pluto was in Scorpio should learn to understand is the ability to let go of some mysteries and uncertainties. Doing this doesn’t sit well with many Scorpios, as their natural curiosity can become overpowering. However, there are times when tirelessly pursuing the answer to a question can actually do more harm than good, as many people of all genders born during this time have learned. It’s all a matter of finding out what is the right thing to do when.

Men born under this sign share the intelligence and biting with of their female counterparts. They are highly incisive, and are often biting social critics and commenters. Many men during this period found themselves drawn towards work in fields related to politics – or, seemingly on the complete opposite end of the spectrum, to fields such as the sciences.

The boom in computer science during this time when people born under this sign came of age attracted many young people of all genders towards the high-powered yet problem-solving focussed industry of computer science.

Unfortunately, what Scorpio has in brains it tends not to match in sociability. While the Libras that came just before this generation were highly focussed on developing relationships, both social and romantic, young people and especially young men of the Scorpio era tended to be less inclined towards devoting much emotional energy towards their relationships.

Many men of this time felt pressured towards a certain vision of the ideal life by the several generations that came before them, and responded to these pressures with rebellion and rejection.

Men of this time tend to be far more focussed on careers and personal development rather than relationships. This is the case also for many women, as almost unprecedented numbers of women choose to avoid marriage until much later in life than previous generations chose to.

Instead, the vision of an ideal life for many Scorpions is one that involves personal fulfillment, pleasing work, financial success, and enjoyable careers – especially in the face of a dire job market, which came to be the general way that things were starting in the Capricorn period.

Perhaps the difficult market is part of the reason that Scorpions are so dedicated to finding success in financial and career-related fields. Scorpio is a sign that always seeks out a challenge, preferably the most difficult one possible. In spite of the discomforts of a bad economy, many people born when Pluto was in Scorpio take some form of pleasure in the problem-solving dimensions of finding a job in a difficult job market.

Pluto in Scorpio In Love

As I have previously stated, this generation is not a group of people that are highly inclined towards letting romantic or social relationships be the most important part of their lives. This is, of course, not to say that no one in this generation values them – it is simply that the value is not the central part of most of their lives.

Additionally, even many people born with Pluto in Scorpio who do value romantic relationships highly tend to view things like financial and career success as necessary prerequisites for them.

When a Scorpion does fall in love, he or she does it with intensity and passion, and they take their relationships extremely seriously. Brief, passing crushes are not the order of the day for this group. While it is a period to which “hookup culture” has been attributed, and this generation is undoubtedly more exploratory than previous ones (more on that in a moment), the one-night stand has lost the mass appeal that it had to those born when Pluto was in Libra.

With that said, Scorpio is the sign of lovemaking and physical desire. This generation is, as a whole, acutely aware of the seductiveness. This is the first generation to make a concerted effort to celebrate lovemaking diversity on a mass level, including the awareness of various levels of lovemaking desire, from intense to non-existent, all being equally acceptable and worth celebrating.

People of this generation increasingly came to see seductiveness as something different from romance – intertwined, but different. This way of seeing the world, while it has always existed (the distinction between love and lust is as ancient as humanity itself), was forced into the counterculture over the last several centuries – acknowledged, but unpopular. During this period, people again began to think of that as a more useful, and, perhaps, honest way of seeing the world.

While lovemaking for a Pluto in Scorpio may not be incredibly meaningful, romance is. If you are in a relationship with someone from this sign (especially if you are also from this sign – which, statistically, you probably are), make sure that you take your relationship as seriously as they do. Be open and honest about your feelings, and learn to open yourselves up to each other healthily.

Dates for Pluto in Scorpio

The first time that we can determine, with certainty, that Pluto passed through Scorpio was from 1746 to 1762. This was a period of incredible changes in technology, as well as how people viewed themselves and the world, as science came to replace religion as the dominant means used to understand the universe.

People born during this time grew up to spearhead major revolutions, including the American Revolution and the French Revolution, bringing about change where they saw corruption.

It is difficult to say yet whether the new generation of Scorpions are gearing up for similar revolutions – if the date holds true, we may want to watch out in the next few years; they could be coming! The American Revolution took place only fourteen years after Pluto passed out of Scorpio last time, and that was 2009!

People with Pluto in Scorpio should be conscious of times when the Sun passes through introverted signs such as Taurus, Cancer, Virgo, Scorpio, Capricorn, and Pisces – especially Scorpio and Capricorn. When the Sun is in these signs, it combines with your natural tendencies to make you potentially quite anti-social and negative to be around. If you frequently feel “down” in the months of November and January, this may be why.

You should also be conscious of the days each month when the Moon is in Leo. The Moon phases represent your deep internal self, and the powerful and even angry nature of Leo as a sign can be harmful in someone who is generally reserved and prone to stewing in your own emotions. During these days of the month, you may find yourself unusually depressed, negative, and angry at the world.

This doesn’t need to be this way – it’s just the moon working. You can rest assured that a few days later, the Moon will pass into Scorpio, where you will feel much more at home, and then into Sagittarius, filling you with inspiration and energy.

If the last time Pluto was in Scorpio is any indication, people born during this time are going to make quite an impact on the world! The enormous shift that happened during the 1700’s from a focus on science to one of religion will be mirrored by a similar shift happening from the 1980’s through to today.

It is still difficult to say, however, what exactly that shift was. We need a little more time to help us see what trends and ideas stick around.

Will it be the increasing focus on career-related parts of life, rather than on relationships?

Or maybe it will be the increasing fluency in technology as something that everyone can use, rather than something that is reserved for an elite few.

It could even be the fact that problem-solving personalities are so highly valued compared to how they have been valued in the past.

So far, it is simply difficult to know! In a few decades, we will probably have developed the hindsight necessary to truly understand this period and the features of it.

This also happens to be the period in which I was born, so my perspective is necessarily going to be a little different from someone who was born either before or after. Every period of Pluto’s history looks different from the inside, and it is important to understand both “insider” and “outsider” perspectives, in order to get a full view of Pluto’s time.

For that reason, I would be especially interested in hearing from people who are were born either when Pluto was in Libra or in Sagittarius! For Libras, did you notice these ways of thinking becoming prominent during the years of Scorpio? And for Sagittarians, do you notice them in your older peers?

1 reply on “Pluto in Scorpio”