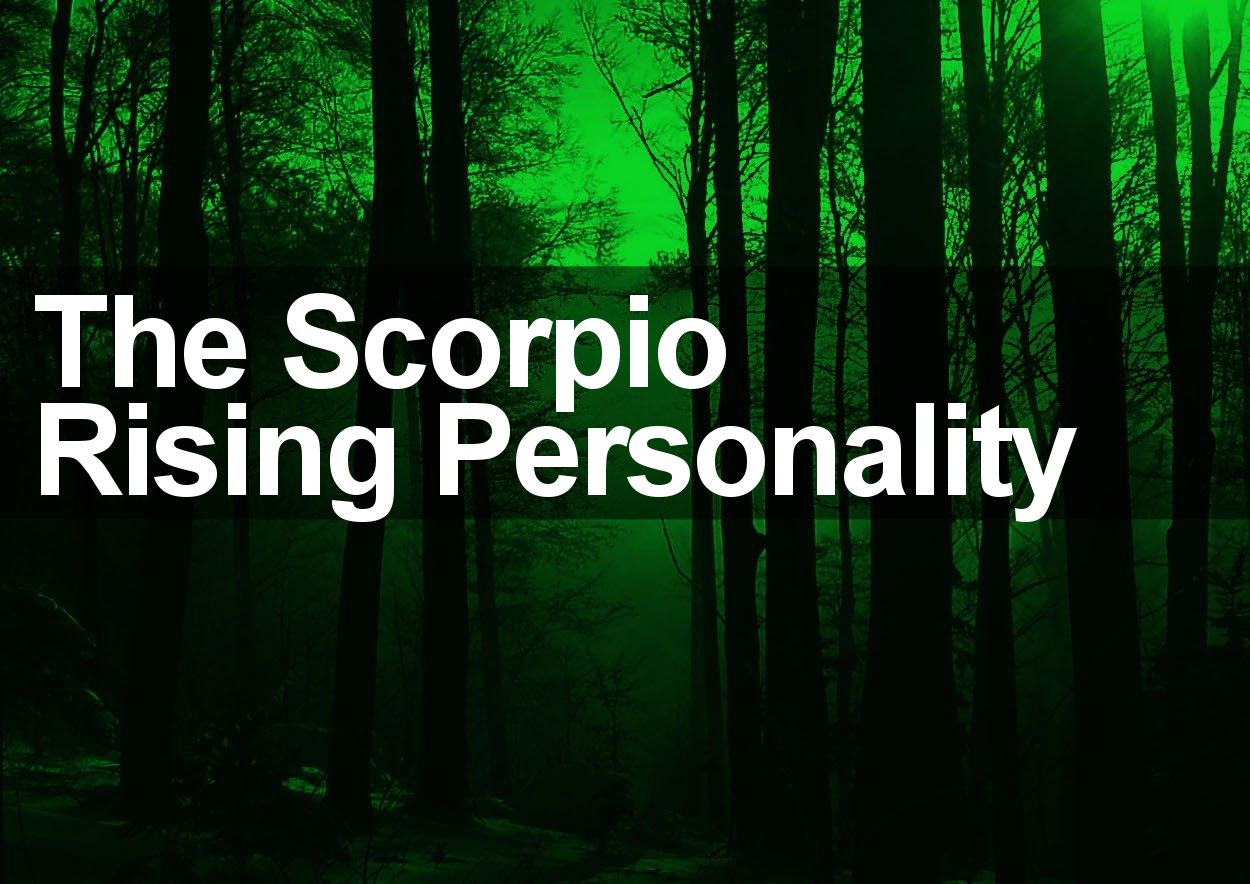 What does it really mean to be Scorpio rising? There is often much confusion about this topic so let me explain the key traits and aspects of the Ascendant Scorpio sign. Answer the following questions –

Do you feel like you have a tough time forgiving people? Do you often find yourself getting so excited about an idea that you become obsessed? Have you ever fall in love with somebody and you are willing basically to give up everything for that person?

While there are some horoscope signs that tend to produce these reactions, chances are you could also be a Scorpio rising.

People born ascendant in Scorpio or who have a Scorpio rising personality are very intense. If there’s any one word to truly describe the Scorpio personality it would be that.

Of course, a person born with a Scorpio rising personality’s very different from a person with a true Scorpio personality.

This is a person who is actually born under the sign of the Scorpio. Even if you are just partly a Scorpio because the fact that you are born ascendant in Scorpio, it’s always a good idea to understand the power and impact of the Scorpio personality in your overall personality.

This way you can see how much of your regular horoscope sign impacts your decision-making processes, your assumptions and your expectations and how you view other people and which part you can attribute to the fact that you are ascendant in Scorpio.

By having a clear idea of the distribution of these elements in your personality, you can take better control of how you respond to other people in circumstances.

You can have better expectations and feel more control over situations.

The worst thing you can do is to wake up one day and finally realize that you act the way you act, think the way you think and make decisions you do because there is this thing called the Scorpio rising personality and you’re unaware of it all along.

By being aware of it now, and understanding the tendencies you tend to go, you can take more control of your life and possibly make better decisions.

The very least that should give you some measure of peace of mind.

Scorpio Rising Is Loyal Until the End

A very interesting aspect of the Scorpio personality is that they are loyal until the end. Unless you gave them a reason to think you are not loyal to them or betray them, Scorpios will stick to you until the end.

They’ll throw everything away and take a bullet for their friends. That’s how intensely loyal a Scorpio can be. Because a Scorpio is all about emotional intensity, this person gives either 100% or doesn’t give anything at all.

The Scorpio tends to look at the world in terms of black and white.

Of course, Virgos look at the world in terms of black and white as well, but it plays out differently with a Scorpio because there’s a very intense emotional component involved. The Scorpio, after all, is a water sign.

Keep this in mind when you’re dealing with a Scorpio because as much as this person will go all the way with you and to protect you, defend you, charge for you and wage war in your name, this person can also become your greatest enemy if that Scorpio feels that he/she got betrayed.

If you find yourself involved in such patterns where you question, “Why am I feeling so intensely about something or somebody?”, it may due to the fact that you were born ascendant in Scorpio

Among all horoscope signs, the Scorpio is probably the most intense. We’re talking about intellectual, career, and all sorts of intensity in additional to emotional intensity. When you look at the human condition and experiences, the underlined bedrock is really human capacity for emotion.

Our emotions are what make us human beings and spiritual creatures.

Unfortunately for the Scorpio is that traditionally their intensity has always been framed in the form of seductiveness. Sure, Scorpios are seductive, both in terms of attracting people as well as being great in bed and as a powerful partner.

But, that is just a powerful fraction of the overall intensity that they bring to the table. They have unmatched intensity.

The interesting thing about the Scorpio, however, is that if they feel defeated and if they feel that the big cause or the big project in their life failed for some reason or other, they lose this intensity.

There are many Scorpios that have no ambition, that would not take a bullet for any cause or even stand up for their family; they have just lost all interest. That’s the dark side of a Scorpio personality.

So, it’s kind of a black and white situation. If there is anything to learn from this is that people who are ascendant in Scorpio as well as people born under this classical Scorpio sign tend to operate in extremes. It’s very hard to find a Scorpio that’s smack right in the middle and just mellow. It happens but it’s quite rare.

You Really Give It Your All

If you’re born ascendant in Scorpio, the good news is that you really give it your all; this is also the bad news.

It’s one thing to give your all to something that deserves your all or is really worth it. But, in many cases, Scorpios end up, giving up their lives for something that really is worthless.

It’s not uncommon for a Scorpios to live lives of regret because they spent the best years of their lives in relationships that really they should have left early on or they stuck with a career that really was going nowhere.

This can push to become bitter and regretful, and to always tell themselves, “I could have become a contender.” I’m telling you, “The worst form of life, the worst kind of life to live is a life of regret.” Unfortunately, this is the big danger for people who are either born ascendant in Scorpio or a classic Scorpio people.

Another key element of the Scorpio personality that people with a Scorpio rising personality need to be aware of is that Scorpios tend to have a tough time forgiving people. They can really hold the grudge.

We’re talking not just about years but also decades; that’s how intensely a Scorpio can hang on to a past slight.

In fact, for most people, time heals all wounds. At worst, time tends to soften the edges of the offense somebody did to you in the past. It’s not the case with Scorpios.

In fact, time makes things worse because the more they think back in the past, the more vivid it becomes and most importantly, they tend to blow it out of the portion.

Not surprisingly, Scorpios have a tough time letting go; they can’t forgive.

As the old saying goes, “You can make an enemy with any person born under the horoscope sign as long as it’s not a Scorpio.” This is the type of person that will not let hell get in the way of payback.

Believe it or not, your Scorpio rising sign can help you. Your intensity and your ability to make a choice and stick with it can be a good thing.

You have to understand that one of the main reasons why people fail to achieve the success that they are capable of achieving is because they take a risk and then when it doesn’t turn out, they quit. Quitting is a sure fire way to lose. And, people who are born ascendant to Scorpio have that inborn Scorpio quality of sticking with it, giving it everything they’ve got and going all the way.

As long as you chose your project, career and life partner carefully, your ability to hang in there and never let go can be your key to relationship success, personal well-being success, as well as career and financial success.