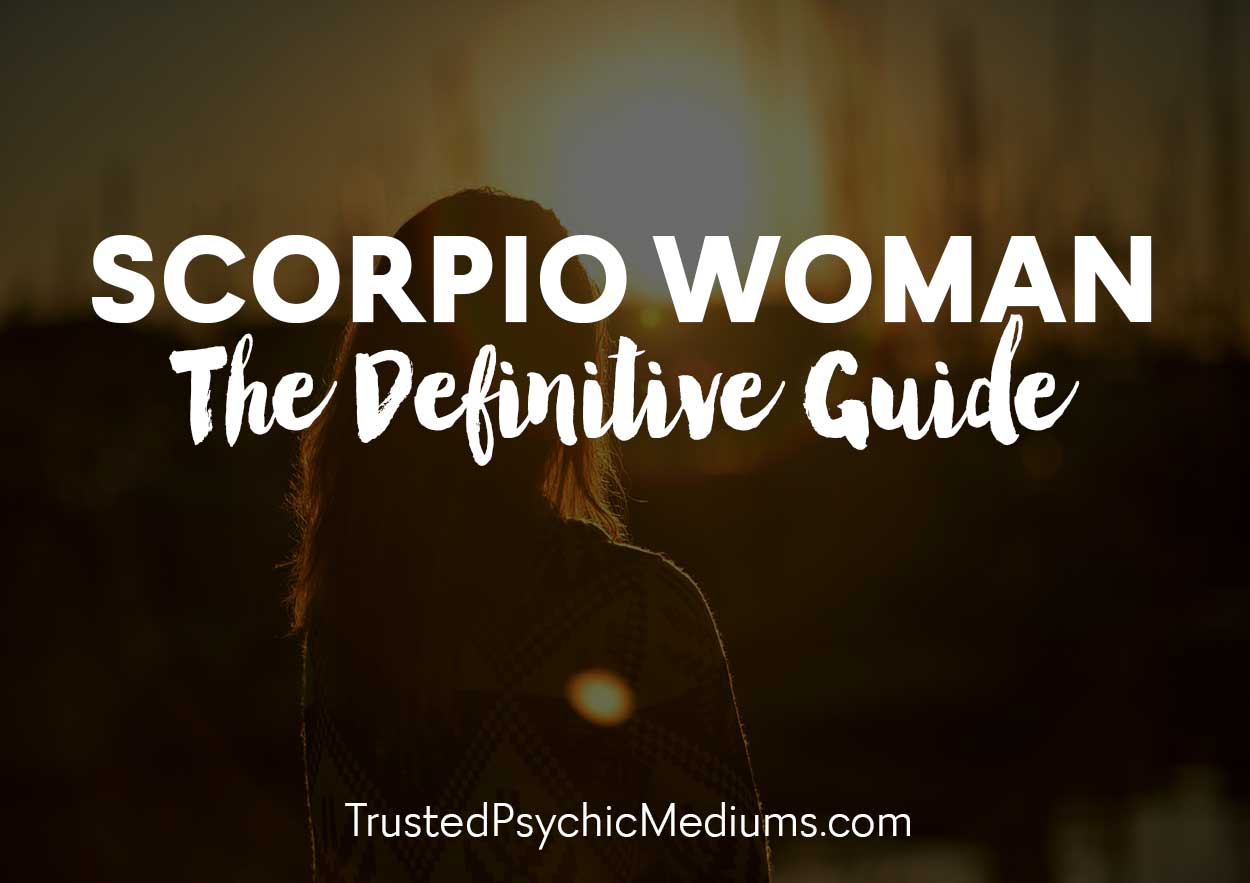 Among all the horoscope sign, the Scorpio is probably one of the most misunderstood and least understood.

In fact, I would argue that the reason why the Scorpio, whether man or woman, is misunderstood is because they are least understood.

There are a lot of stereotypes and outright mythology surrounding the Scorpio personality. Unfortunately, the Scorpio woman, and to a large extent the Scorpio man as well, tends to bring it on herself.

What do I mean by this?

The Scorpio woman tends to behave in such a way that people can easily read in negative interpretations. Two people can see the same thing take place.

Objectively speaking, something happened, but two different people can walk away with two totally different conclusions.

The Scorpio woman tends to draw the most negative conclusions for actions that other horoscope signs can get away with.

However, the Scorpio woman is very easily misunderstood. If she engages in that behavior, it’s very easy for her to get a bad reputation.

I am, of course, not just talking about lovemaking. I’m talking about a wide range of behaviors. There is just something about the Scorpio personality that tends to repeat certain patterns.

The good news is that if you’re a Scorpio, you can make these patterns work for you. Here is a definitive guide to the Scorpio woman.

Love and emotions, in general, are the most important things in your life.

Regardless, love and emotions, in general, are extremely important to you.

In fact, they are so important that you consider yourself the most loyal friend. You really put a lot into people you love. You give 100%.

When a Scorpio is in love, she gives it everything she’s got.

This is a very intense form of love. This makes her really feel complete. This gives her a high degree of fulfillment and contentment.

She loves to give love. She feels good giving off herself.

The downside is that your displays of affection can be so intense that it can scare people off.

Worst of all, it can be misunderstood. You can come off as obsessive.

It’s not uncommon for people to think you’re slightly crazy. What they don’t get is that you are being yourself. You are simply being emotionally honest.

Scorpio people often lose sight of the fact that we live in a world that has many lines. These lines of conduct are set by society.

We’re not supposed to step over these lines; otherwise, we might look crazy, off, or weird.

This is why they’re easily misunderstood.

However, this also fuels a deep and profound sense of freedom in the Scorpio woman’s heart. The more you feel that the world is against you, the more intense you can be.

The problem is that if they do not see the same level of emotional intensity coming from you, they begin to doubt you.

They begin to doubt the relationship.

In their minds, they give you a deadline. You have to prove your love and commitment by that deadline.

Of course, they don’t tell you this. As that deadline passes, she then gives herself permission to look elsewhere.

Alternatively, she gives herself permission to essentially emotionally wall you off. In other words, you may still be physically in a relationship, but emotionally, she’s gone.

Once she turns her back, she’s probably gone for good.

There are rare cases when you can win a Scorpio woman back. However, keep in mind that you really cannot win them back fully. Something will always be lost.

That’s how unforgiving they can be.

If there is any one character flaw the Scorpio woman needs to work on, it’s her intensity, because this intensity has lots of negative implications.

I mean, there can just be so many negative implications.

It doesn’t mean you’re emotionally fake, all of a sudden.

What it does mean is you are basically just letting life unwind in front of you instead of trying to just blast at it with a high degree of emotional intensity.

There’s a reason why Scorpio people, not just Scorpio women, have a reputation for being vindictive.

If you cross a Scorpio, you will have hell to pay.

In many cases, revenge will take place at your lowest moment. In other words, when you’re feeling the weakest and most alone, that’s when the Scorpio will pay you back.

The reason why Scorpios can get vindictive is because they have such high expectations for their relationships.

This is particularly true of friendships. They really hold you to a high standard.

This doesn’t come out of nowhere. They do this because they hold themselves to a high standard.

Remember, Scorpios, in general, are very intense people. They are emotionally burning bright 24/7. Accordingly, they would give you everything.

The problem is that’s also the standard that they are expecting from you.

In fact, it’s very easy for them to really go overboard and take it very personally.

They might feel that you pulled the Judas move on them and stabbed them in the back. This can lead to all sorts of misunderstandings.

And oftentimes, Scorpio friendships that go sour escalate to an almost fatal level until it diffuses.

You have to understand that the Scorpio is very emotionally intense. They can be very, very prideful on an emotional level.

You have to learn how to say sorry and mean it if you don’t want to be on the business end of Scorpio revenge. Consider yourself warned.

When it comes to lovemaking, one of the best partners you’ll ever find is a Scorpio. This applies to both Scorpio men and women.

This should not be a mystery. After all, Scorpio women have a historical reputation for being great lovers.

The reason why they’re great lovers shouldn’t be a mystery at all.

You can get together with a Scorpio woman who is a virgin and still get a great experience in bed.

Very simple. They are very emotional. They know how to push the right emotional buttons.

They know how the emotional choreography of lovemaking works.

The Scorpio woman gets this.

She really gives it her all, and this is why sleeping with them really takes physical intimacy to a whole higher level.

The downside of making love with Scorpio women is that they can get impatient with you very quickly. If you cannot match their level of intensity, you run the risk of disappointing them time and time again.

It only takes a matter of time until that disappointment in the bedroom can boil over into other areas of your life together. You don’t want this to happen.

You can start by increasing your stamina. That’s a good place to start.

What I mean is that they have different priorities.

Their priority is a high level of emotional engagement in what they are doing. In other words, as long as they feel that they are doing something worthwhile, they will give 1,000% to that project.

This is precisely the reason why Scorpio women tend to do well in their chosen fields and career.

As long as they chose it voluntarily, as long as they get a high degree of happiness from what they’re doing, they can go really far.

You have to remember that any career, regardless of industry, requires a high degree of focus. Since Scorpio women often operate with a high degree of emotional intensity, this gives them a tremendous amount of focus.

The good news is that those trinkets don’t have to cost much.

However, if you’re a Scorpio woman and you want to manage your money better, make sure you break this link between the emotional meaning of a trinket and the trinket itself.

While you’re not very materialistic, you can easily fill up your closet with stuff you don’t wear or even use.

The only reason you have all that stuff in your closet or garage is because you bought it to fill an emotional hole.

Do you see what’s wrong with this picture?

They can be very exacting too. They may sometimes come off as cold and demanding.

However, this is driven by an intense love. They always operate at a high emotional intensity. They expect a lot from their children and their husbands.

However, if you ever threaten or harm a Scorpio woman’s family, you have another thing coming.

As intense as they are with their emotions and the people around them, they don’t take threats lightly. If you are looking for hell to pay, mess with a Scorpio mom and her family.

My Final Thoughts on the Scorpio Woman

The Scorpio woman’s greatest strength and biggest weakness is her intensity.

Things are never as dramatic as you make them out to be. Things are often not as bad as you think.

However, it’s very hard to snap out of your emotional habits.

Your biggest blessing is your intensity. In the hands of a mature person, you make all sorts of things happen with that high degree of intensity and energy.