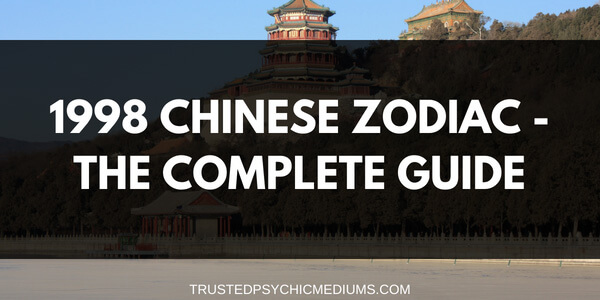 People who are curious about the folklore and mythology behind their birth year find that the 1998 Chinese zodiac – the Year of the Tiger – connects them to a wonderfully distinguished and elegant animal.

Yet as we explore what are the traits of the Tiger in Chinese astrology, we find that there is even more to the graceful big cat than meets the eye.

From their deepest personality secrets to the ways Tigers can bring themselves good luck, take a look at our overview of the animal for people born in 1998 in Chinese astrology.

Personality type of the 1998 Chinese zodiac

People born in 1998 were born in the Year of the Tiger, and that proud animal is the third of the twelve that make up the Chinese zodiac.

The animals within Chinese astrology are listed in numerical order according to where they placed in the Great Race in ancient Chinese folklore – an event in which the Jade Emperor, ruler of the gods, summoned animals from across the known world to take their place on his new zodiac system.

The tiger arrived third owing to sheer force of will, athletic prowess and unstoppable strength, with even the might of the river, a final barrier between he and the Jade Emperor, unable to stop him.

That same tenacity and endless energy is very characteristic of people born in 1998, who are never short of big dreams and the inner motivations to pursue them.

People born in 1998, the Year of the Tiger, are ruled by their powerful emotions.

While this makes them incredible lovers and admirable in their capacity for self-reliance – and loyal friends on top of that – these people can also become too narrow in their view.

Being hard headed and refusing to consider other points of view can see the mighty Tiger pounce impulsively into realms angels fear to tread.

Yet so pronounced is the power of the Tiger representing people born in 1998 that these big cats are never lying down for long when things don’t go their way.

A commanding presence and capacity for natural leadership helps rally people to the side of the Tiger more often than not, but don’t be fooled – behind the stripes and claws, these people have abundant sensitivity too.

They don’t like to share their vulnerabilities though, so if you see this softer side of the Tiger, consider yourself a trusted ally to them indeed.

People born in the Year of the Tiger are always up for some friendly competition, but can also get down and dirty into some less convivial rivalries too if they’re challenged.

Never one to back down, people born in 1998 will fight their corner until their final breath, with an often surprising ferocity.

As many of you exploring Chinese astrology are aware, knowing which animal is which year in the Chinese zodiac is just half the story.

Besides each animal, there are also the elemental rulers of every given year to consider – these shape the personalities of the existing animals representing a given year further, and create all the more nuance and intrigue in their personalities.

Because of this, it’s perfectly accurate to say that people born in 1998 were born in the Year of the Earth Tiger.

This lends some temperance to an otherwise very bombastic personality, because the Earth element is a more tactful and grounded energy than many other Tigers experience.

While still wonderfully spontaneous, Earth Tiger people born in 1998 are far more likely to consider the long term ramifications of their actions – perhaps saving themselves some trouble in the process.

Likewise, this grounded energy is able to help Earth Tiger people to let their head and their heart discuss certain opportunities and partnerships within them before just rushing off to the latter rule the former.

However, this penchant for patience may well help Tiger people to overcome being reckless, but these folks must be careful not to allow this more measured approach to slow them too far into the opposing direction.

In other words, a 1998 Earth Tiger personality is sometimes capable of ruminating on a given decision for so long as to never truly make it, and let chances pass by that other Tiger souls would pounce at because of it.

Best love matches for the 1998 zodiac

As a natural born romantic who is very much in tune with his or her emotions, the soul born in 1998 in the Year of the Tiger is always happy to play the game of love.

But of course, not all of us can keep up with so much depth of passion and remarkable energy, and because of this, some Chinese zodiac animals are a better match for the spirit and vigour of the Tiger than others.

It’s also worth keeping in mind that, at a subconscious level, people born in the Year of the Tiger tend to dominate their relationships with the sheer size and power of their personas.

However, this is a good match for the Dragon, an equally powerful and charismatic spirit.

The match between a Tiger and a Dragon in Chinese astrology has a real power couple dynamic. It’ll always be lively, but always be loving too – an explosive mix, especially behind closed doors.

A more gentle relationship is possible in the equally recommended match between a Tiger and a Horse in Chinese astrology.

These two strong and graceful animals each have a very different outlook on life, as do the people born under their respective years.

Nevertheless, the tender compassion and kindness of the Horse is inspiring to the Tiger, who likewise motivates the Horse partner with their energy, dynamism and indefatigable spirit.

Definitely consider the mixture of the tempos of life enjoyed by the Chinese astrological match of the Tiger and the Pig.

Although unlikely lovers at first glance, the Tiger’s swiftness and energy coupled with the pragmatism and patience of the Pig makes for a partnership in which balance is reached.

What’s more, each of these Chinese zodiac animals is somewhat sensual and pleased to enjoy life’s little pleasures, especially together.

Wealth and fortune for the 1998 Chinese zodiac

People born in 1998 are natural born leaders, because the personality of the Earth Tiger in Chinese astrology lends itself so well to taking the initiative and setting the path for others to follow.

Of course, a flair for the dramatic means that people born in the Year of the Tiger can sometimes get waylaid in their personal feelings on their climb to the top of the pile, but make no mistake – these people gravitate towards positions of authority and are awarded them more often than not.

However, it’s also worth keeping in mind that people born in the Year of the Tiger are as apt to spend their wealth as much as they’re talented in making it.

This constant movement of income and outgoings can mean that money doesn’t have enough time to rest in the bank account and accumulate for these folks.

In keeping with their high tempo lifestyles, Tiger souls can go from rags to riches and back to rags again, sometimes several times in a lifespan.

A saving grace here though, is that we are discussing people born in 1998 – the Year of the Earth Tiger.

The more concrete nature bestowed upon these people by the Earth element makes them that much more resilient against their impulses – and if all goes well, the long term vision necessary to ensure a smooth career path of growth and personal development, and the salary and nest egg to go with it.

Chinese astrology is rich with folklore and legend, but also has much to teach us in terms of attracting and retaining good luck.

This is especially true for people born in the Year of the Tiger, who rely on their good fortune to help them through the darker days when their sheer force of personality isn’t quite enough.

As one example, the lucky numbers for the Tiger are 1, 3 and 4 – all numbers that are said to bring confidence and good fortune to these remarkable people.

Even those people born in 1998 who don’t follow astrology of any kind will often find that these numbers and patterns surrounding them follow them throughout life in mysterious ways – and often concurrent with their greatest moments of personal success.

On the flip side, unlucky numbers that a Tiger personality in Chinese astrology ought to avoid are 6, 7 and 8 – easy to remember, but not always easy to avoid.

Of course, lucky colours can help thwart that influence too, and they tend towards the regal for the Tiger – blue and white, but also grey and, of course, the vibrant orange of a tiger’s own fur coat.

Not all royal colours come recommended for people born in the Year of the Tiger though.

Gold, silver, brown and black are all suggested to be unlucky colours with unsavoury energies for these people.

In Chinese astrology, directions on the compass also are marked with fortune for certain personality types.

The directions of the compass that bring the Tiger good fortune are east, south and southeast – those Tiger people who practice feng shui often incorporate that into their interior design.

3 unusual facts about the 1998 Chinese zodiac

With so much complexity behind it, Chinese astrology has tons to teach us about just about every kind of personality you can imagine.

The same is true of the Earth Tiger people who were born in 1998, whose elemental match up makes them an especially distinctive version of this Chinese astrological animal.

Firstly, it’s worth revisiting the lucky and unlucky numbers for the Tiger in Chinese astrology.

For instance, the fact that 7 is considered an unlucky number for the Tiger is quite a contrast to how the number 7 is viewed for all of us living in Western society.

Indeed, many Tiger people simply disagree that there’s anything lucky about superstitions surrounding 7 at all, even if they don’t know it’s unlucky for them.

Secondly, never underestimate just how unpredictable even the more balanced personality of the Earth Tiger of 1998 can be.

Even contemporary Chinese adages like that famous quote from The Art Of War – fail to plan, and one plans to fail – are sidestepped by Tiger people.

In other words, they never seem to plan for anything but seem able to improvise their way through proceedings successfully anyway!

Thirdly, it’s worth noting that people born in 1998 as an Earth Tiger are often a little more in touch with faith and spirituality than other Tiger types.

This could be conventional religious beliefs, a more agnostic approach to the idea that there could be something greater than ourselves out there, or even a New Age approach to spirit guides and extrasensory perception.

However it comes through, these Tiger folks tend to be a little more esoteric than the norm.

There is no doubting that the Tiger is one of the most distinctive, proactive and high energy personalities in the Chinese zodiac.

Yet for those people born in 1998, there is a more balanced and considered perspective that is theirs alone.

People born in 1998, the Year of the Earth Tiger, enjoy both the energy and confidence of their symbolic big cats, but also the tempered consideration and compassion brought to them by the Earth element.

However, sometimes conscious effort will be necessary to make sure that these counterweighted areas of their personalities are put forward in harmony.

For instance, an Earth Tiger can lose his or herself to considering an opportunity from all angles, rather than accepting their instinctive urge to pounce at it and work out the details later.

If these Tiger people can overcome a penchant for being single minded in their approach to life, they can benefit from some superb wisdom.