The Dos and Don’ts of Breaking Up With a Leo 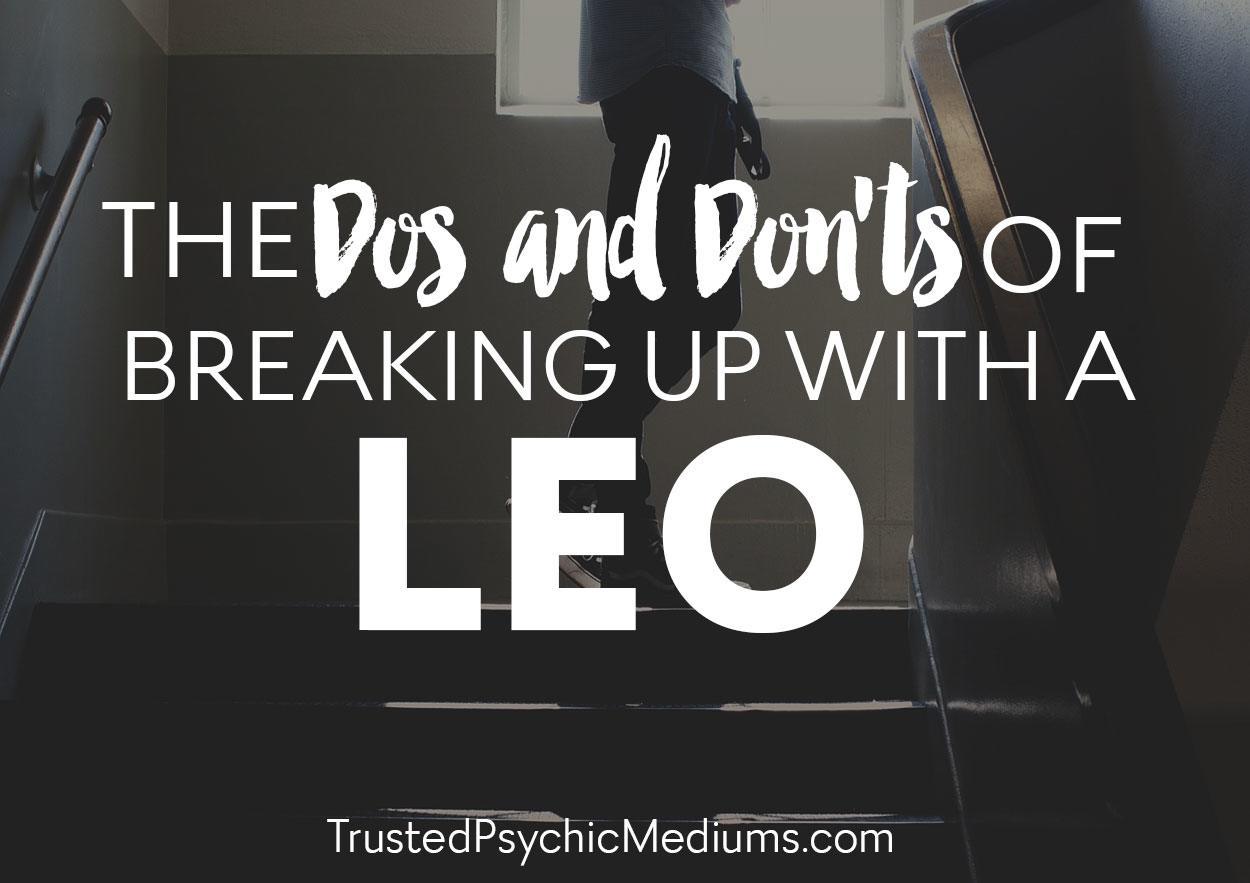 It’s very easy to see why people are attracted to Leos. It really is.

Leo people are very confident. They like going into a room, taking charge, kicking butt, and taking names. That’s how awesome Leos are.

If you are unsure of yourself or if you lack confidence, it’s good to get behind a Leo because the Leo would take the flak.

The Leo would take the negative attention and push it back. They never hesitate to tell people where they’re coming from.

There seems to be a lot of courageousness and a lot of decisiveness in the Leo personality that makes them quite magnetic.

It’s very easy to get attracted to a Leo because, in many cases, they have the personality that we wish we had.

Most of us, let’s face it, tend to stay in the backgrounds.

When there is a sensitive situation, we tend to try to keep things under wraps. We try to hold back.

The Leo will tell you exactly what’s going on and where he/she stands.

Unfortunately for the Leo, this is not always the optimal way to deal with any kind of confrontation or issue.

This is especially true in any kind of work or political situation.

Unfortunately, the Leo doesn’t care. At least, they appear like they don’t care.

They just charge in with half a clue and not worry about it. The problem with this type of strategy is that you end up alienating a lot of people.

If you study the typical Leo, chances are they never really go far in life.

Of course, a lot of them become doctors, lawyers, or business people. In terms of career choices, they tend to be well represented.

The problem is their level of success. Sure, a Leo can become a lawyer, and many are.

The problem is they never move past a certain level. They never break through.

Why? They’re too candid.

Unfortunately for many people, this is the worst definition of candid.

The positive definition of candid is you are able to tell the truth and the full truth.

You have to understand that the truth is often a compilation of many different viewpoints. In many cases, it’s an imposition of will.

In certain situations, it arises from consensus.

Try telling that to the Leo.

I’m going through this aspect of the Leo personality because breaking up with them can be quite volatile.

There are many cases of people born under different horoscope signs breaking up with Leos ending up scarred for life.

If you don’t want to get emotionally burned trying to break up with that Leo in your life, you need to do it the right way.

Here are the dos and don’ts of breaking up with a Leo.

Focus on Where You Went Wrong

You have to understand that Leo people totally believe in one particular saying. What saying is this?

“Success always has many fathers, failure is always an orphan.”

In other words, Leos like to claim credit when things are going well. However, when they experience failures in their lives, it’s always somebody else’s fault.

Of course, anybody can tell that this type of thinking leads to, guess what, failure. Because if you are unable to accept your own shortcomings, you will be unable to move on.

You will be unable to fix what’s fundamentally wrong with your life so you can reach higher and higher levels of success.

Leo people don’t bother with this. It’s everybody else’s fault. It’s never their fault, and that is a mistake a Leo does when it comes to love as well.

So if you’re trying to break up with a Leo, focus on where you went wrong.

I know this is going to be a bitter pill to swallow, but you need to do it. Otherwise, you’re going to have a lot of unnecessary drama.

Also, you will see firsthand that infamous Leo rage. That’s right. They can blow up and they can burn people.

It’s no surprise then that many people who had Leo lovers in the past can never really move forward.

Why? When they tried to break up or when they broke up, the Leo did or said something that really scarred their ex-partners for life.

So if you don’t want that infamous blow-up, focus on where you went wrong.

In fact, this can be quite therapeutic because if you take honest stock of your shortcomings, you can make serious progress with your future relationships.

What you have to say is sometimes outweighed by when you say it.

There is always a proper time to talk about a breakup. This is extremely important when you’re dealing with a volatile Leo personality.

You have to focus on the right time. You have to read him/her carefully so you can work towards the talk that you need to have.

Don’t just dump everything on him/her.

If you do that, you would be surprised as to how volatile and bad-tempered your Leo partner can become.

Don’t ever blame your Leo partner. As I have mentioned earlier, you might need to bite the bullet and blame yourself.

However, never ever make the mistake of blaming your Leo partner. This is a sure recipe for disaster.

This is a sure recipe that they will lose their temper or totally freak out.

Focus instead on the fact that things do happen. Bad things happen to good people. Just leave it at that.

When you are outlining why you are to blame or why the relationship didn’t work out, don’t make it personal.

Don’t make the Leo feel that they personally failed.

You have to understand that Leos do not like to feel like failures. In many cases, they like to walk around thinking that they are the masters of the world.

They think that they can do nothing wrong.

By personalizing the issue and calling them out, you will puncture this imaginary world that they live in.

Guess what will happen next. They will turn on you.

So never ever get personal. Focus on impersonal things beyond both of your control.

This is not lying. It’s actually the truth.

In many cases, certain relationships just don’t pan out. Focus on what exists and move on.