Libra: The Six Types of Friends You Need (And the Three You Can Do Without) 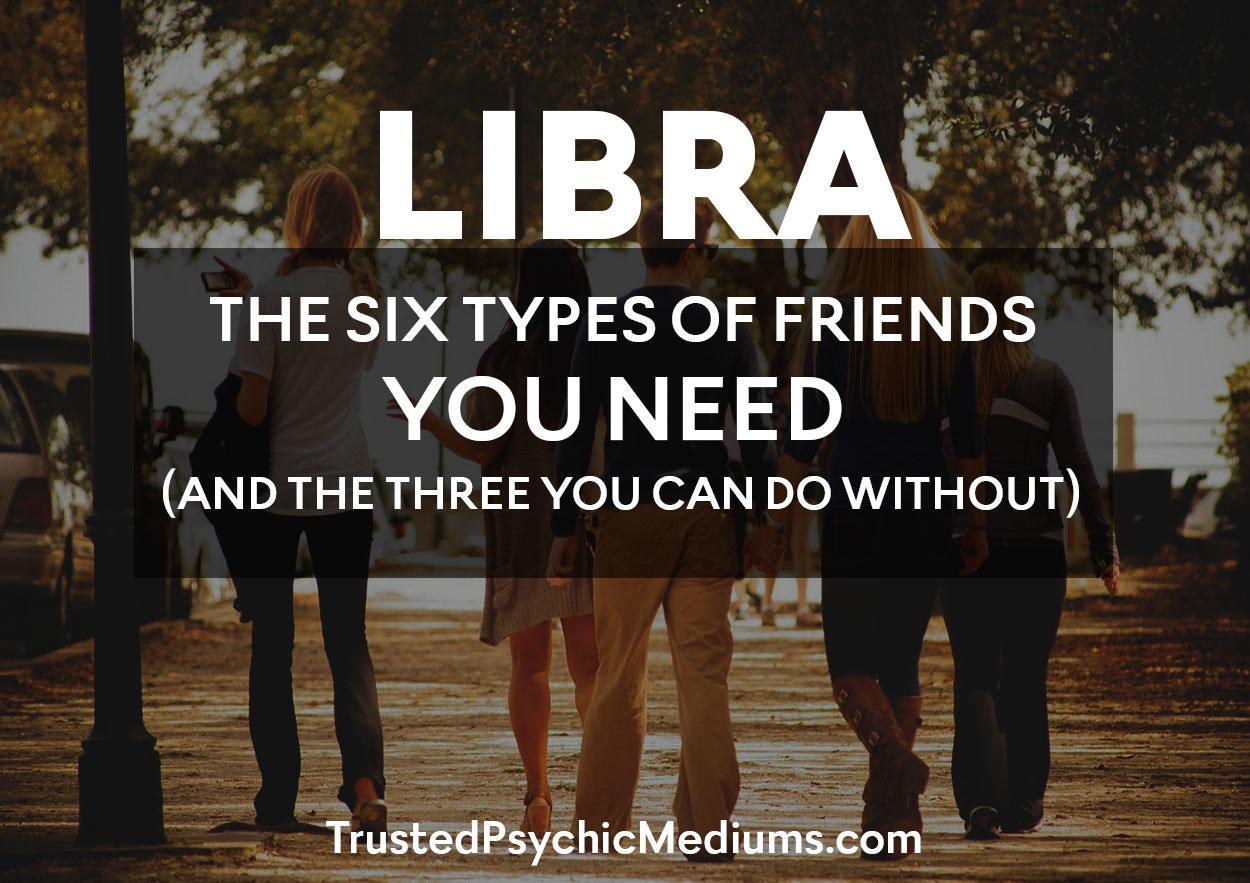 In any life, we all develop disciples. We all develop friends. Unfortunately, when we die, it’s almost always Judas who writes our biography.

I don’t know where I got that quote from, but I got it from a famous literary figure. His or her name escapes me at the moment, but I figured I’d mention that quote.

That quote is very appropriate to the topic of Libra friends.

However, there are also three types of personalities that the Libra women or men can do without.

In fact, the Libras can do much better by simply avoiding these people. Here are the personality types you need to be aware of. The first six are friends that help Libra.

The final three are bad friends. These are people that you need to stay away from.

The critic is somebody who always sees the negative in everything.

The critic is always looking at the glass half empty. The critic always tries to snatch defeat from the jaws of victory. The critic would see very beautiful things but would notice that one negative thing.

Why is such a negative person good for the Libra?

When faced with a critic, the Libra is forced to focus on the positive.

The critic is very negative so the Libra uses his or her emotional and intellectual firepower to look at the positive side.

By working with critics or surrounding himself or herself with critics, the Libra is pushed to be a more positive person.

One of the most debilitating aspects of the Libra personality is that you can’t seem to make a decision.

You would keep asking for more information and ask for extension after extension.

Once that deadline is reached, guess what? You still haven’t made the decision.

You just don’t like to be put on the spot.

The good news is if you surround yourself with people with the personality of the pusher, you are forced to make a decision.

The good news is nine times out of ten, Libras make the right decisions.

This type of person is very big on timelines. This person will get really upset if you don’t meet the deadline.

For example, if you’re supposed to meet somewhere at a certain time and you’re five minutes late, you won’t hear the end of it.

This might seem like a very unpleasant person, but this is actually the kind of person that Libras can really benefit from. Why?

Libras have a tough time with deadlines, especially in their career and relationships. As much as possible, they like to keep pushing deadlines further and further to the future.

As much as possible, they’d like to take their time making decisions.

Of course, the more time they get, the further away they get from actually doing what’s expected of them. This is the big paradox with the Libra.

Well, when you’re best friends or good friends with many Mister or Miss Deadlines, you are forced to be more productive.

At the very least, you are forced to make more decisions.

Since you’re a fairly intelligent person, and you take decisions seriously, nine times out of ten, you would make the right decision.

Normally, this is a Taurus, a Leo, or an Aries. When you have these people around you, you are inspired.

Part of the reason why Libras are always stuck in analysis paralysis is because they lack courage. They are afraid of being wrong.

Well, the good news is that everybody is afraid of being wrong, but they still choose. They still make decisions anyway.

It’s time that you take charge of your life.

When you have these types of people around you, you are inspired by them taking life by the horns and running with it.

Nine times out of ten, they fail, but they get back up. You get inspired by their resiliency.

This type of person takes action now. He doesn’t wait.

As long as he has enough information, he just charges in and focuses on the results later.

The problem with Libras is that they have it completely opposite: They obsess now and act later.

The saddest part is that they act much later if at all.

This can be debilitating. This can have serious negative repercussions for your career, your family, and your love life. You have to act now.

What I am saying is once you have enough information, this could be like 50% to 75% information, run with it.

Life is full of uncertainties. That’s what makes the world so exciting and challenging.

The scientist is a person that just goes through tons of data and just really picks apart data.

Now, you might be thinking if you want the Libra to take action, wouldn’t the scientist harm the Libra?

At first glance, you would be absolutely correct. After all, the scientist is doing the same things that the Libra is doing. How can the scientist help?

The scientist can actually make the Libra realize that he or she is stuck in analysis paralysis.

The scientist can become sort of a negative model. They just look at their scientist friend then conclude, “I don’t want to be that person.”

As a result, the Libra is pushed to take a decisive action more frequently.

Bad friends you want to avoid

If you’re a Libra, be on the look out for these types of people. These personality types will only do you harm. Consider yourself warned.

The frenemy is an enemy that acts like a friend.

However, this person encourages you in the wrong things. If you’re feeling stuck, what would a frenemy do?

As a result, you waste your life and the frenemy is in the background laughing his or her ass off.

Since you tend to look at the bright side, it’s very easy for you to draw people that are looking for emotional support.

They don’t really care about getting better. They just want to leech off your energy, so they can move on to the next day.

These are energy drains, and they can depress you. Stay away from emotional leeches.

This type of leech doesn’t focus on your emotions. Instead, this person is focused on your analytical ability.

While picking the brains of your friends is good for intellectual stimulation, you can only take things too far.

When you hang out with too many intellectual leeches, they reinforce that negative part of your personality where you keep asking for more and more data.

The more data you get, the less confident you are in making a decision.

When you hang out with too many intellectual leeches, they eventually enable you to avoid decision-making altogether. Totally bad news.

This would destroy your career and your relationships. In fact, it can cripple your life permanently.