Five Questions to Ask Your Virgo Man Before You Get Married 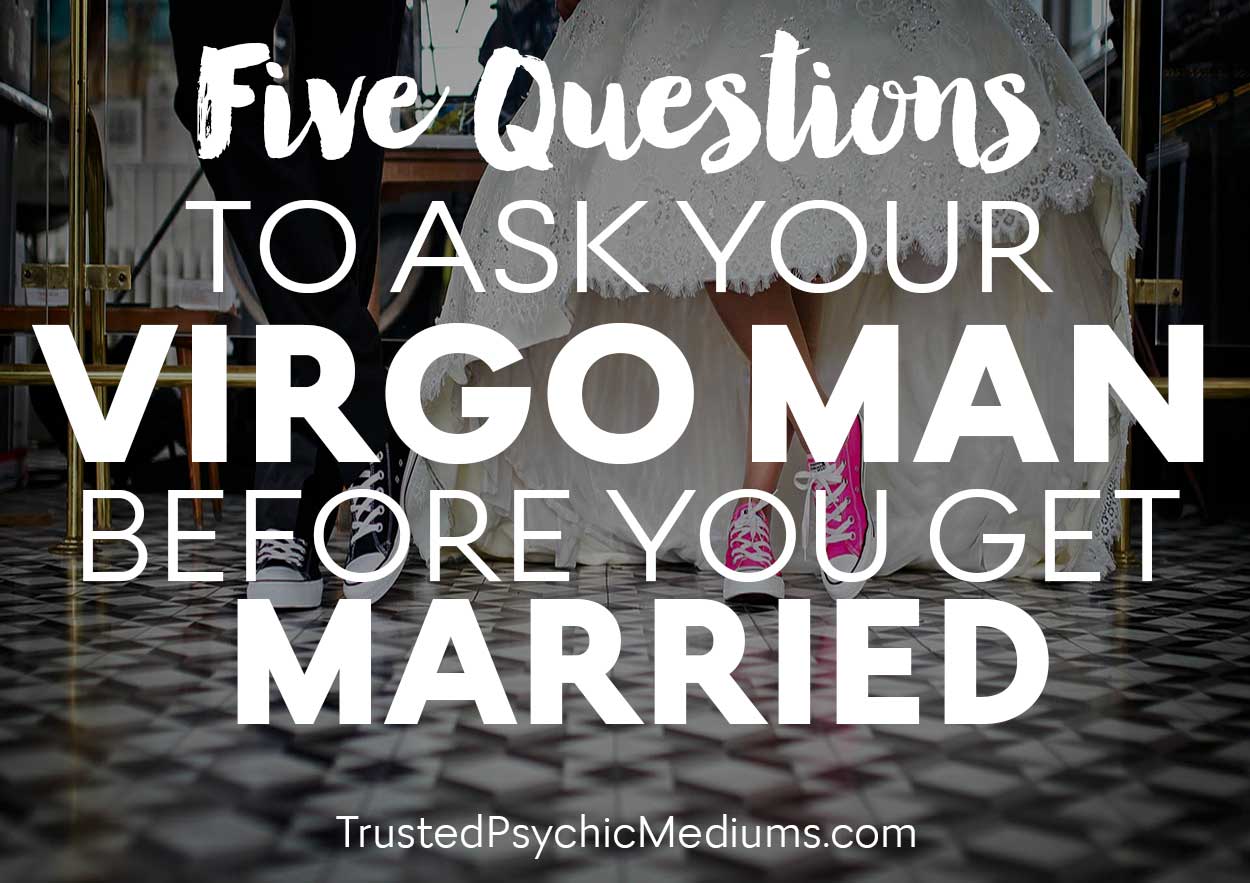 If you are going out with a Virgo guy, you probably already know that he’s a perfectionist.

In many cases, it appears that he has this ideal world that he measures this world against. This can get quite frustrating.

It can also get quite sublime and inspiring. Depending on the mood you catch him in, you can either be frustrated or be fascinated by your Virgo man.

While the dynamic between you two may be at times fun and at times challenging, things definitely go to a whole new level if you decide to get married.

If your Virgo man has put the question out there or floated the idea of marriage, you need to ask him five key questions. These questions should get you thinking.

These questions are crucial because they paint a picture of the kind of life you would have if you end up choosing this guy.

Don’t get me wrong, Virgo guys make for great fathers and great husbands. The question is timing.

If you marry a Virgo man at the wrong time, you may be in for a rough ride. However, if you marry a fully developed and evolved Virgo man, you can get the best of both worlds.

Again, it all boils down to timing and maturity.

Unfortunately, every Virgo man has different timelines. Everybody is marching to his own drummer as well as his own schedule.

These questions can at least give you a clear idea as to where your Virgo man is as far as his personal development is concerned.

What do you want to achieve before you retire?

This is one of those big picture questions that truly get people to think.

It’s one thing to ask somebody what his or her goals are. It’s another to focus on achievements.

This question is very open-ended. It can actually easily lead to a bucket list type of question. Regardless, it’s a question worth asking.

At the very least, it shows you in clear terms what the values and traits of your Virgo man are.

Do they match yours? Do they meet your expectations? Are they headed in the same direction?

Another thing to keep in mind is that just because this person wants to achieve a certain set of goals doesn’t necessarily mean that they are unchanging.

Life after all is what happens when we’re making other plans.

With that said, it’s a good idea to ask this question because you can at least get a feel of what’s important to him. You can also get a feel what he has achieved before he gets married and what he has yet to achieve.

This is neither a slam-dunk question nor a dispositive question, but it does get you into the same ballpark as to what your shared goals are. It also lets you clearly identify where you differ.

What is your biggest goal in life?

Be prepared for the answer to this. It may come out of left field or blow you away.

You have to understand that your Virgo man is highly idealistic. A lot of his emotions and thinking processes come from the world of ideas.

However, these ideas are often wrapped up in very emotional forms. He is very sensitive. He can also be very considerate.

You have to phrase the question the right way. Otherwise, it might come off as threatening, or you’re judging him.

The key to the Virgo man is to get in through the emotional door, so he can open up. Otherwise, he could view you as a threat and wall you off.

What if you don’t achieve your dreams?

Now we’re getting somewhere. We’re also getting into a dangerous territory.

So it’s so important to remember that how you say something is just as important as what you have to say.

You have to couch this in pleasant terms and maybe beat around the bush.

However, it’s extremely important for you to ask this question whatever form it takes. You have to get into his mind as to how he would respond if things don’t pan out.

You’re basically asking him to supply you with a plan B.

Once he has given you the answer, does it line up with your own plan B?

Many couples break up because they don’t have a plan B. They always assume that things will proceed the way they’re going now and things will never change. That of course is a recipe for disaster.

What would you give up to achieve your dreams?

This is actually my favorite question. This gets to the heart of the matter.

I’ve left it for #4 because you may have to beat around the bush a few times to get to this stage. It’s kind of like presenting a case in court.

You have to lay the proper foundations before you can pop your question.

Otherwise, your question is going to be overruled. The same with getting a Virgo man to map out his future plans, you have to lay out the proper foundations.

This is a fundamental piece of the big picture that he has for his life.

You’re basically asking, “How far will you go to achieve your dreams or how much of a price would you pay?”

This is really important to ask because many guys would give up their relationship, their youth, or their families just to reach that goal. The question that comes back to you: Will you be okay that?

Is that price good enough for you? Whose dream are we working towards? Is it just his dream or is it some sort of collective dream between you and him?

Will your family come before everything else?

Finally, after you’ve asked the fourth question, this should come up naturally.

The reality is that when you start a family or get married, a new being is born. It is no longer you or him; it’s the relationship.

That is the foundation of marriages that last.

Marriages that invariably fail remain just a loose alliance of two separate people. Marriages that are built for eternity are based on the fundamental assumption that once you get married, you give up your old self and your partner gives up his old self.

A new self and a new identity are born.

This is why many couples remain married, despite the fact that they’ve grown to hate each other. It’s out of duty and out of obligation to the marriage.

Eventually, that duty and obligation reignites the passion. That’s the great thing about moving beyond convenience and comfort towards duty and commitment.

You have to be very diplomatic when asking these questions.