Libra: Seven Ways to Attract More Love into Your Life 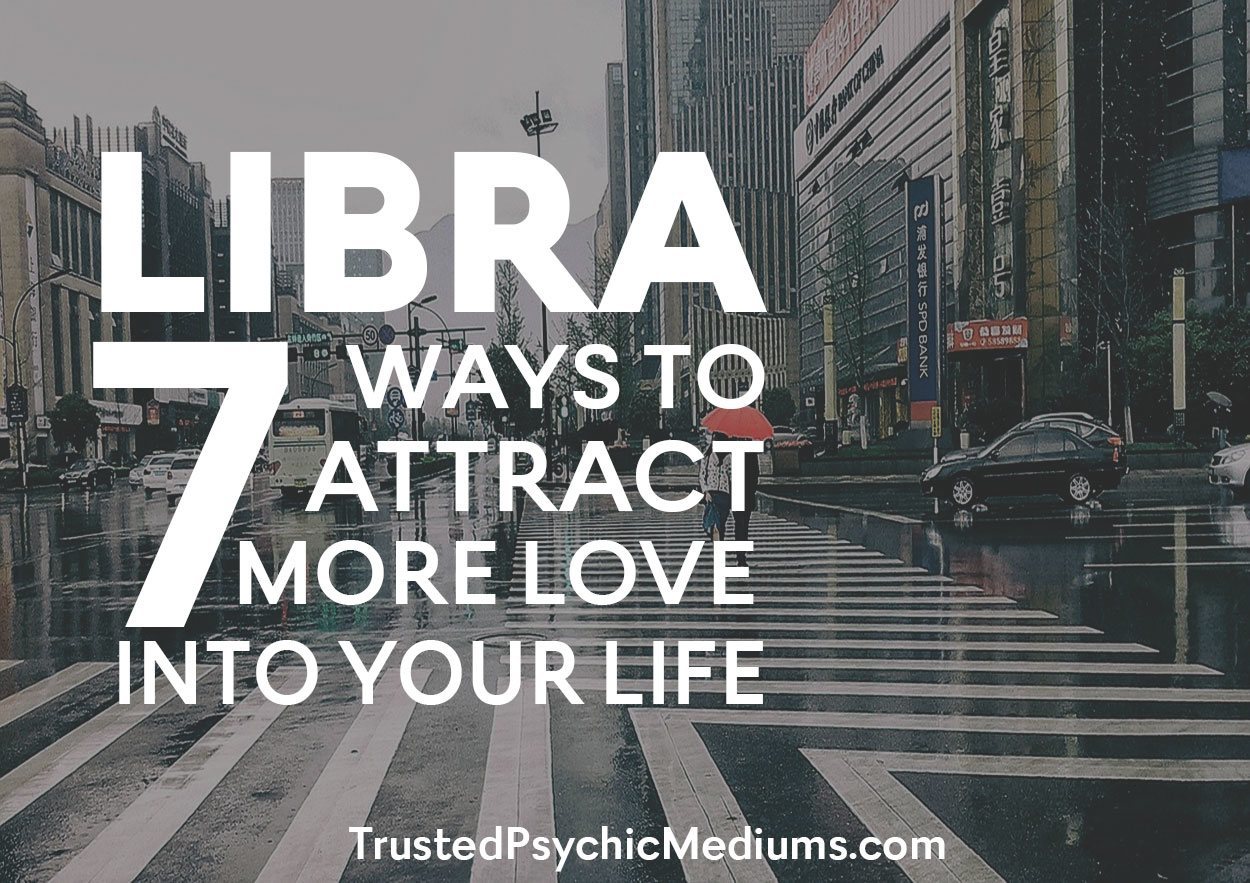 Libra people often settle when it comes to matters of the heart. In many cases, they feel that they could have gotten a much better partner if they had held out longer.

In some cases, they feel that they could have gotten a better romantic partner if they tried harder.

Let me spell it out for you.

Regret has no room for a healthy relationship.

If you are in love with somebody, you shouldn’t regret anything about your relationship.

Even regretting the fact that you didn’t meet sooner can be toxic. It can corrode and cause problems for your relationship.

Regret, once again, has no place in a real love relationship.

Unfortunately, Libras tend to regret a lot when it comes to love matters. The reason for this is they settle for what they get.

You might think that this doesn’t fit the Libra personality. You would be absolutely correct to think that way, but the reality is the reality.

However, a large part of their personality goes out the window when it comes to romantic issues.

It’s very easy for them to go on auto-pilot. As you probably already know, when you make a decision based on auto-pilot, nine times out of ten, you make the wrong decision.

When you are deciding on a person to let into your life and love, you’re making a very important decision. You can’t make such a decision based on impulse.

Not surprisingly, a lot of Libra women and men tend to regret their romantic decisions.

This doesn’t mean that they’re completely unhappy with their relationships. I’m not saying that at all.

Instead, I’m saying that they feel they could have achieved a higher level of happiness.

This really is pointless. If you’re in a relationship, you need to make that relationship work. Otherwise, it’s in your interest to get out of the relationship.

Those are the only two choices you have. You either go in all the way, or you just make a clean break.

There is no middle ground.

This is the hard reality many Libras find out in the hardest way possible.

If you’re a single Libra, if you want to attract more love into your life, and you don’t want to have any regrets, here are seven ways.

Master these seven ways so you won’t feel like you’re settling.

Lose Yourself in the Moment

Libras are not very spontaneous people. They tend to coast along from moment to moment, but they never really experience it in a very intense way.

Each second of our lives passes only once. We owe it to ourselves to really lose ourselves in the moment and savor life at that precise moment.

That moment is never coming back.

If you’re able to do this, you will send off the right signals to people and you would attract more love.

Why? You’d stand out from the crowd because, for some reason or another, people are fixated either on the future or the past. Most people aren’t focused on the present.

If you’re one of those people who are able to enjoy life in the moment, you are able to send the right signals to people.

It’s OK to Wear Your Heart on Your Sleeve

Libras are very emotional people. Don’t get me wrong.

They may not seem all emotional. They may seem balanced. But they are emotional people.

However, for something to be a truly human experience, it has to have emotional components.

This throws people off. This also attracts people. Also, it keeps you grounded on who you really are.

If you feel like you have to play a role because people expect you to be always analytical and balanced, you are only cheating yourself.

At the end of the day, these people aren’t worth impressing.

Be True to Yourself

It’s very easy for Libras to focus so much on the expectations of others that they lose track of reality. The only real compass you have for inner reality is your perception of who you are.

By focusing on what’s important and what’s real, you are able to live life in the moment.

You are able to make better connections.

However, if you’re feeling frustrated and anxious, it’s because you allowed other people’s expectations of you to take over your life.

Libras are often expected to be analytical. However, this might not be the predominant aspect of your personality.

This is a really bad spot to be in because the truth will always come out.

Instead of the truth setting you free, the truth would end up embarrassing you. This is not a winning strategy.

Instead, focus on who you really are. Focus on what makes sense to you. This is the core fundamental truth that is at the center of your being.

Forget About Conventional Wisdom From Time to Time

It’s very easy for the Libra to become a slave to convention. It really is.

You end up being so afraid of what other people would think that you stop thinking for yourself.

You have your own core truth. You might need to get in touch with this inner truth from time to time.

You would discover that instead of a rude awakening, it actually energizes you.

It actually gives you a boost. It pushes you forward.

You need to come back to this from time to time to get a fresh dose of energy. Otherwise, you would fall in to the very common trap of living your life purely for other people.

Don’t Be Afraid of Your Convictions

One of the results of the Libra tendency to always analyze both sides of an argument is to end up at a conclusion.

They keep weighing sides. They keep asking for more information.

But they never come to a conclusion. They never decide.

Well, in reality, they do. In fact, it doesn’t take much effort for them to come to a conclusion because they have all the facts.

They’re just shy of publicly proclaiming what that conclusion is.

If you want to attract more love to your life, if you want to get more favorable emotional attention, don’t be afraid to let your conclusion shine.

You have to remember that there is no such thing as a right or wrong answer when it comes to opinions.

As long as your opinions are based on reason and logic, and are backed up by evidence, you’re on good ground.

As long as you can explain why you feel the way you feel, then you should be OK.

Don’t be afraid of coming to a conclusion. This can draw more people to you.

The funny thing about people born in the sign of the scales is that they can easily be manipulated.

It’s very easy to see why this is the case. After all, it only takes a heavier object to make a scale imbalanced.

If you want to attract more people into your life, you need to learn how to stand your ground.

You need to understand that you are a very thoughtful and well-reasoned individual. This means you can actually come up with solid conclusions.

Once you have done all the research, once you have given the matter enough thought, don’t be afraid to stick to your conclusions.

Don’t be afraid to defend your conclusions. This will give you conviction. Conviction always draws people.