Pisces: The #1 Communication Trick to Deepen Your Relationship 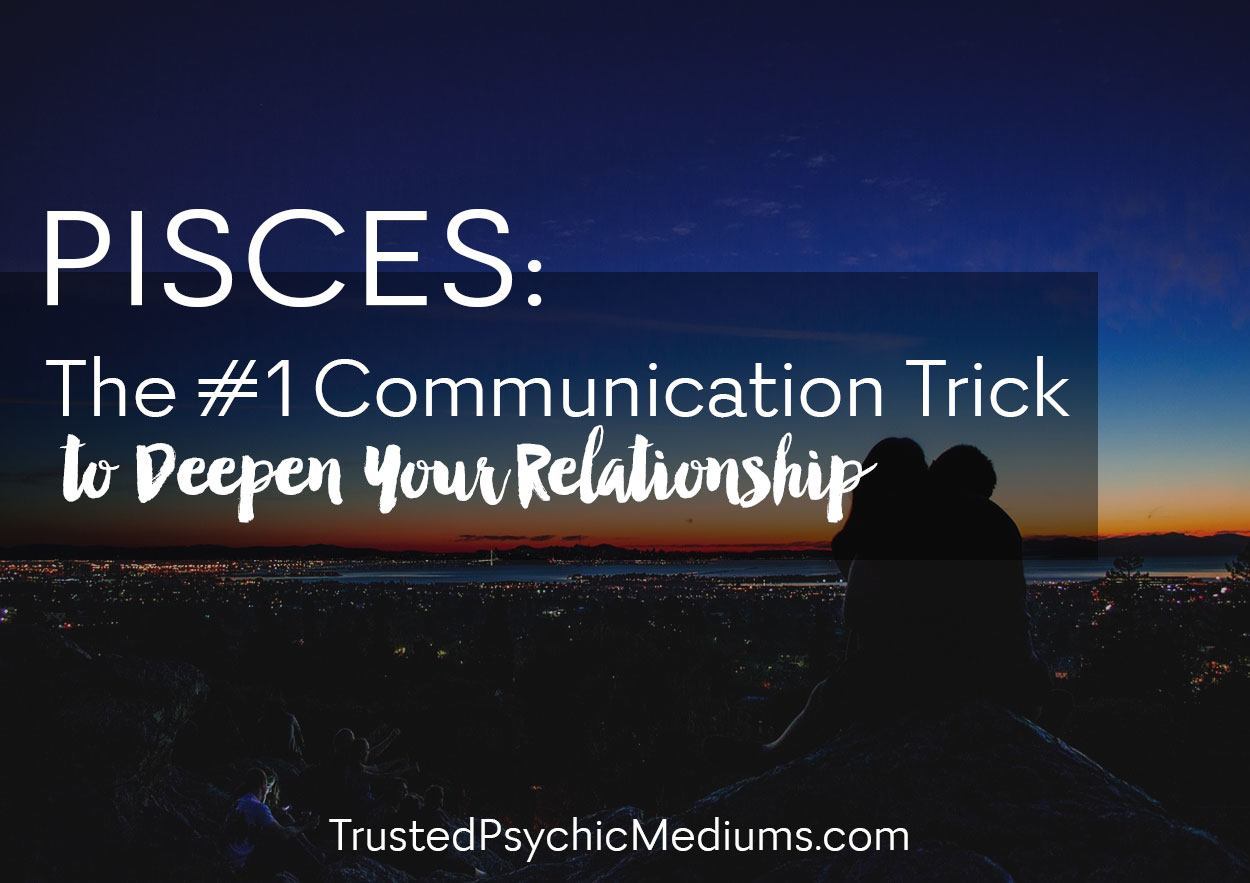 Pisces people look at the world as an emotional map.

It’s very easy to spot a Pisces because they tend to say the right things at the right time.

It’s very hard not to like a Pisces person. Why?

They are emotionally authentic. They prize emotional honesty. They seem so genuine and seem to actually care about what’s going on with other people’s lives.

They look at the world as this emotional sea that can often turn antagonistic. They know how threatening certain situations can be.

Their number one tool is to communicate with people on a deep emotional level.

When you understand people for who they are, not based on who they think they are, you can really connect.

That’s how you truly know people.

Unfortunately, this can also be quite scary because you have to understand that society works in terms of convention.

We all like to draw all sorts of imaginary lines that we convince ourselves to never cross.

Sadly, there are also personal identities made out of convenience.

A Pisces woman or man can be very threatening in that respect because they tend to get under your skin by focusing on what’s important on an emotional level.

This can lead to all sorts of defensive mechanisms and evasions by their relationship partners.

In particular, the pairing of the Pisces and an earth sign like the Capricorn, Taurus, or Virgo can lead to awkward lines being drawn in the relationship.

However, the most volatile mix would be between a Pisces and a Cancer.

Cancer people are very defensive. After all, this is a horoscope sign that is based on the crab.

Crab is tough outside, but soft, mushy, and very vulnerable inside.

But deep down, they are driven by a lot of insecurities and they have a lot of personal dirt, or at least, they feel that it’s personal dirt.

Not surprisingly, when the Pisces in their life begins to get too close for comfort on an emotional level, they tend to wall that person off.

Well, let me tell you right now. The moment you start walling off people emotionally, you effectively kill the relationship.

Real relationships mean you grow and, guess what, nothing makes anybody grow more than pain.

Nothing makes anybody grow more than struggle. You can’t have a real relationship without the bumps on the road.

Cancer people, however, want everything smooth so they consider any form of emotional authenticity as somewhat threatening at some level or another.

So if you are a Pisces and you want to deepen your relationships, you have to be aware of these minefields.

You have to understand that, as loving and as understanding as you try to be, there are people who would be threatened by this. Why?

That’s not how they navigate the world.

Sure, on some level, they can reflect some of your warmth and understanding. But they can also be threatened by it.

We all come from different backgrounds. We all have different expectations.

We all have different assumptions

Simply assuming that everybody prizes emotional authenticity and deep warm emotional bonds is not going to cut it.

In many cases, you might get your heart stepped on many times over.

It’s not uncommon for the Pisces to give his/her heart fully, only to have it thrown back at his/her face all mangled up.

If you’re sick and tired of being treated like an emotional doormat, you have to use this number one communication trick to deepen your relationship.

What is this trick?

The technique of mirroring a person

Have you ever gone to a retail store where the salesman seems to be very effective?

Have you ever spoken to a salesperson who seems to know everything you want to inquire about?

Have you talked to a sales representative who seems to understand your very needs?

Well, guess what. That person is using a common trick. This communication trick works all the time in all sorts of situations where emotional interplay is required.

Of course, selling something requires a high degree of emotional competence.

This is basic to any form of persuasion, whether you are a lawyer making a case in a courtroom or a salesperson in a sales floor.

You have to read people’s signals and send them the right signals that push them to where you need them to go. It may feel like the salesman is just simply responding your needs.

In reality, the salesman is shepherding you through a distinct sales process that ends with you whipping out your credit card and putting extra dollars in the store’s register.

Pisces people need to understand the power of mirroring because it enables them to gauge the level at which they would communicate their emotions.

If you freak out your partner by being so emotionally authentic and overflowing with emotional intensity, chances are your relationship would not survive.

Chances are you would get walled off or there would be some sort of emotional defensive maneuver.

By mirroring them, you are able to massage the process so you can spoon-feed them the emotional feedback that they need without them feeling threatened.

This can lead to a healthy two-way emotional exchange that leads to both of you growing into the relationship instead of one partner feeling pushed out.