Virgo: How to Deal With the Chronic Whiners in Your Life 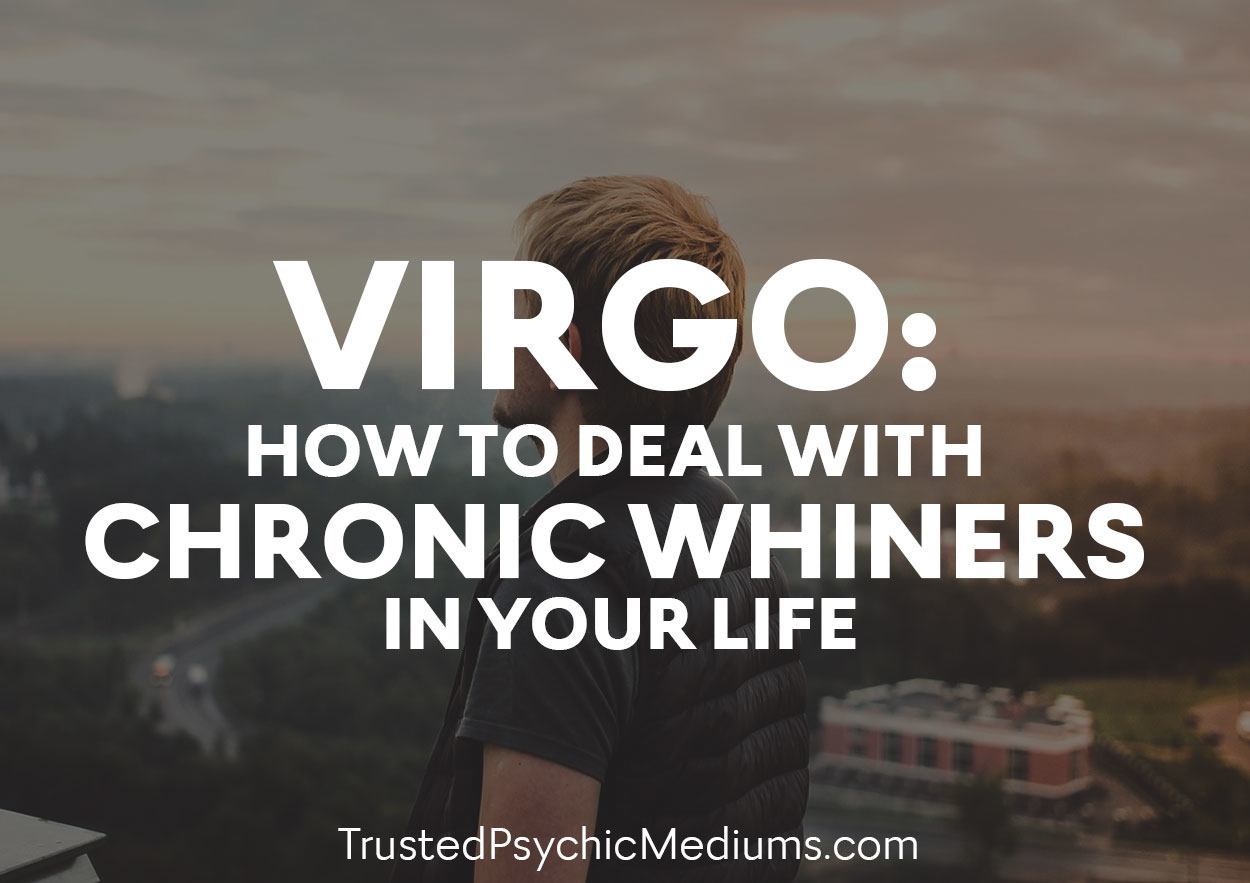 The interesting thing about the Virgo is that this is a person who seems to have everything together.

If you were to talk to a Virgo, nine times out of ten, you are talking to somebody who’s fairly intelligent and seems to have a fairly balanced view of the world.

Deep down, however, there is a deep and profound sense of insecurity and lack of fulfillment.

It’s very easy to see where this comes from. There is this hole in their soul that keeps them from fully being happy.

I’m not saying that at all.

They can’t seem to let go of all that unnecessary drama because of this deep and profound hole in the core of their being.

What constitutes this hole? Good question.

It actually boils down to a conflict that they themselves set up. The conflict is pretty straightforward.

Virgos are among the most idealistic of all horoscope signs.

They have this imaginary world that they live in where certain principles and standards are in effect.

They then use that imaginary world as some sort of mirror to compare to the world that they actually live in.

This is a serious problem for a Virgo woman or man because they can’t seem to let go of the comparison.

Now, don’t get me wrong. There are other horoscope signs that do this, but they are able to draw the line between what’s real and what should exist.

Unfortunately for the Virgo, they feel that the way the world is never good enough.

It should behave according to certain rules that they themselves set.

Unfortunately, try saying this to a Virgo, they’re going to oppose you.

So how do Virgo people deal with the chronic whiners in their life?

Chronic whiners complain because there is something that you do constantly that rubs them the wrong way.

As the old saying goes, “The squeaky wheel gets the grease.”

If people don’t complain, nothing ever gets done.

The people in your personal life who constantly seem to whine on and on and on actually have a point.

There is something you are doing that grates them the wrong way. Nine times out of ten, it is your standards.

You have to remember that the typical Virgo is a perfectionist. Nothing ever seems to be good enough. Nothing seems to be enough.

Nothing seems to reach the highest level of their expectations.

While it’s okay to have standards and expect a lot out of yourself, you should never punish yourself by being miserable when you don’t meet those standards.

If you fail, simply get back up. Dust yourself off and try again.

However, the typical Virgo approach is when they fail, they are the biggest losers in the world.

This form of mental sadomasochism is really the reason why many Virgo people are never fully happy.

You would notice that a lot of Virgo people in their career tend to stay in the middle of a corporate structure. They can’t seem to move past middle management. It’s very easy to see why.

This heavy emphasis on an impossible perfectionist standard corrupts and corrodes their interpersonal relationships.

If you’re a Virgo and you notice that there are chronic whiners in your life, they’re whining for a good reason. There is something that you’re doing that impacts them negatively.

Nine times out of ten, you are imposing on them impossible standards than can make their lives a living hell. This is especially true if the whiners are people in your immediate family.

If you want to get rid of all the constant whining, you only need to do one thing.

What do you need to do? Wake up. That’s right.

Wake up to the fact that the world isn’t perfect

Wake up to the reality that people are inadequate. That’s who we are. We are human beings, so we screw up time and time again.

Does this mean that you should just get rid of all your standards wholesale? Absolutely not. However, you still have to live in reality.

When people screw up, call them out on it, but also supply a solution.

Don’t just go around pointing fingers at people and judging everybody. Condemnation doesn’t save people.

Respect people and their standards

Respect means when you truly respect people, you don’t just push them down into the dirt. You also pull them up and teach them how to clean themselves up.

You have to understand, you yourself are dirty. You yourself have shortcomings.

If you go around calling people out without addressing your own feelings, you’re nothing but a hypocrite.

It is no surprise then that people are constantly whining around you because they see the hypocrisy. They see the break between what you preach and what you practice.

But you yourself must work towards that perfection.

If you are going to hold others to a particular standard, you better live up to that standard as well.

By waking up to this reality, you would go a long way in ensuring smoother relationships at work, in your neighborhood, and most importantly, in your family.

The good news is that the seemingly negative side of the Virgo can actually push the Virgo to be a better person.

If you hold yourself up to a higher standard and don’t inflict that standard on everybody else, you can become more successful.

You can push yourself to reach higher and higher levels of personal and professional success.

Again, it all boils down to your choices.