Scorpio: Two Personality Traits That Are Holding You Back In Life 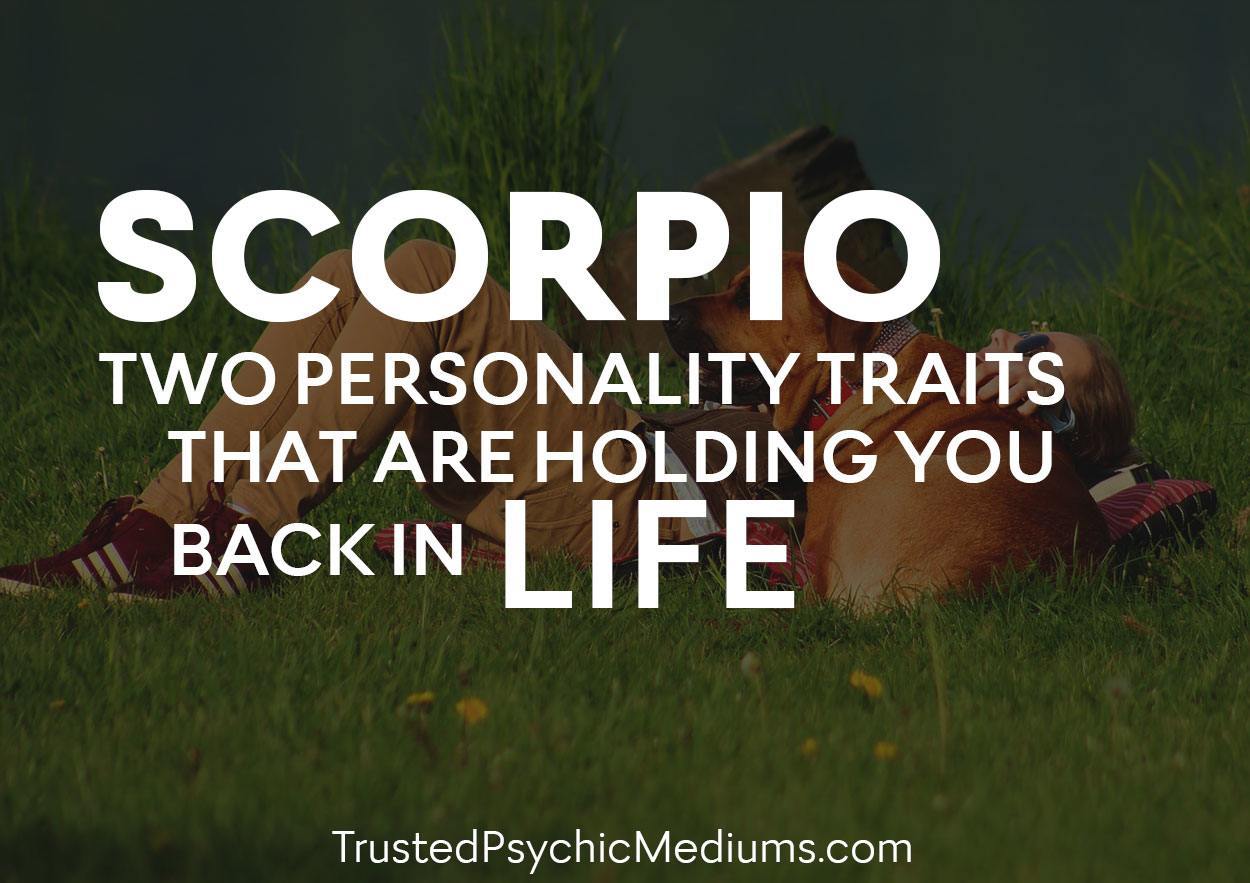 One of the most misunderstood signs of the horoscope is the Scorpio. It’s very easy to see why.

Scorpios really don’t do themselves any favors when it comes to misunderstandings.

In many cases, they actually pour gasoline into the fire. While more sensible horoscope signs would take a step back to diffuse situations, Scorpios can actually be forced to go to extremes.

There are many Scorpio personality traits that can be quite negative.

However, it’s all based on context. If you’ve been reading this blog, you would know that there is no such thing as a completely irredeemably bad horoscope sign.

By the same token, there is no such thing as a perfect horoscope sign as well.

It’s very easy to look at this reality as some sort of black and white dualism. The truth is they are two sides of the same coin.

What I mean by this is that what is a negative trait today might not be so negative in a different context tomorrow.

There is no such thing as absolute when it comes to the human experience.

While there is such a thing as good and evil, everything else pretty much runs into a gray continuum. It all boils down to context.

I need you to keep coming back to this key concept when I talk about the Scorpio. It’s very easy to look at the following information as completely negative.

However, you need to look at the context. You have to understand that while these personality traits might pose a serious disadvantage to the Scorpio in most settings, in certain contexts, they might actually help.

In fact, in rare contexts, these two personality traits are what make the Scorpio rise above the rest.

Beware of Your Intensity

There is no such thing as a middle ground for the Scorpio.

This can be a serious drawback in life. As I have mentioned earlier, life is composed of thousands of colors. Life has many different hues. Morality, decisions, and people in general are perceived from a spectrum.

Good luck telling this to the Scorpio.

There is this built-in mythology and idealism regarding rebellion.

The more out of step they feel they are, the better they feel about themselves. They think they’re doing something right and there are so many people complaining.

This can be quite negative because there is a reason why conventional wisdom exists.

Simply going against the grain because it makes you look like a hero in your mind is not a good enough reason. You have to have a solid reason for trying to do things the unconventional way.

As I have mentioned earlier, this personality trait isn’t always negative. Steve Jobs thought this way. Look at what he accomplished in his life.

However, when it comes to your relationships, this can be a serious issue. It’s one thing to go against the grain because you’re looking to innovate; it’s another to try to be different just to be different.

This trait naturally flows from the first trait described above.

If you see yourself constantly rebelling against the conventional wisdom and conventional practices, it’s very easy for you to take things personally.

You have to understand that people are very predictable.

Not surprisingly, most people respond quite favorably to mirroring. When you mirror their emotions, they look at you as more of a friend than an enemy.

Don’t take it personally. This is the stance that you took. Nobody forced you to do this. This is the direction you wished to go.

Unfortunately, many Scorpios take things personally when a lot of the negative emotions they’re feeling are actually self-inflicted.

It all begins with the first point. By making better choices and knowing how the game is played, you would have better expectations.

If you set the right expectations, it would be almost impossible for you to be unhappy.

People are only unhappy because they set the wrong expectations. You have to understand that if you go your own way, you have to have the right expectations.

We will often associate certain personality traits with a star sign, and that can then shape how we feel about them as well as the way in which we then interact with people.

The best method of coming to terms with understanding these traits is to spend time looking at several facts associated with them, and see which ones you believe are going to apply to your own individual situation.

Scorpio thrives on the concept of being mysterious in life, so that is something that they will continually work on whenever possible.

Providing this sense of intrigue is certainly something that you enjoy as a person as you believe that it keeps people on their toes whenever they are around you.

Also, it provides a sense of control since it does mean you are able to manage the information that comes out.

2. You can be rather intense.

There is another trait that is often related to the Scorpio, and that is the individual being rather intense in life.

This does cover an array of different areas of life but you are often viewed as being the type of person that is pretty full on which does then mean you expend a significant amount of energy on a daily basis.

There is also no doubt that trust will form an integral part of how you view anything in life. Without trust, or the feeling of it, you are going to struggle to get anywhere.

You like to see yourself as someone who is trustworthy, and you expect to get the exact same in return and will be rather disappointed if that is not actually the case.

4. Being competitive in life is what it’s all about.

Scorpio loves to be competitive in life, and they are not afraid to show this fact.

They just never want to feel as if they are coming off second best with anything, so they are going to put up a fight for everything even when most people would see things as a lost cause.

5. You are also very protective.

Any individual that is a Scorpio is going to be extremely protective of those people that they care about.

However, only the select few are able to get into this position as there are pretty high standards in order to be elevated to this level.

Once an individual gets there, then they will have the support of the Scorpio through thick and thin, unless it is the Scorpio that is affected.

Ultimately, Scorpio does have a number of pretty boisterous personality traits for you to be aware of, and it should be no surprise that they are viewed as having a sting in their tail, especially when crossed.

However, their personality is certainly going to be a strong one to contend with if you remain on the right side of them, and if that is the case then you have a friend for life.

2 replies on “Scorpio: Two Personality Traits That Are Holding You Back In Life”

It’s was mind blowing every paragraph of the whole reading was me to the tee. But I’m one of the scorpios that made to the father of the house position and I thank God everyday for this gift . The negative parts was me growing up late teens 20s I was def the one not to cross . But father also instilled the joy to help others when no ones looking. I’m am so over protective of my boys and I’m in this years long process of instilling loyalty Into my boys at the same time exsplain when not to put the loyalty In the wrong people . But I beleive every human being I come I contact with deserve kindness and caring and respect . And most are great people . But once I give that first show to new person in my life that respect that from not k owing them I give them the respect caring and kindness that exspect back . And if it go’s badly I won’t hesitate to cut off ASAP. I call it the Scorpio chip . We all start with it one on are shoulders growing as we learn. Getting rid of ego as best as possible is a most. Having children turned me into a person that thoughtfully try’s to the next right thing in ever next move. I’m learning things about my self as I keep texting in the box so thank you . Sending love and light .

Well the traits that hold us scorpios back now I realized even tho it put me in the worst circumstances. Is that I used them as I’ve bin growing as a tool to make myself better . I’m 39 . I grew up since a young teen a drug addict. So the streets the violence just doing bad things to survive on a daily basis and being ok that it was on the darker end . I thought this was me I’ll never change. I was So programmed in this matrix we live in. Oct 17 2017 I snapped my tibula and fibula in half compound brake threw the skin . And that was the start of my waking up and the scales started falling off my eyes and there’s a saying once you put on the magic classes they can never be taking off and you can never force them on someone else. I try to open eyes on a daily basis I wan t everyone to wake up and it’s not there fault there not there . There programming was so strong for so many years . But I try . And most turn from me and think I’m crazy and it don’t both me because when I catch that one person and I say something I see there eyes twinkle of a almost understanding and not I have the qeustion of things . Then I no help one. There’s no better feeling . The bad side of Scorpio has also instilled survival skills . I’ll no I’m in a bad situation minutes before the situation shows itself then I have time to react timely and sometime very extreme if I feel that’s what it will take to walk away from the situation. I’m learning to love my self . And I never new that the spoken word you can bring things to manifest. And talked so negatively growing up I didn’t reliaze how much harm I was inflicting on my self but now I’m grateful because I also used that as a tool to learn I no the power in it so I innerstand the power of positive words/talk . I have a constant hunger to learn to better myself and raise my vibrations. Thank you for letting me write this was good I’ve never don’t this before and I feel great from this so thank you for this opportunity. Love and light