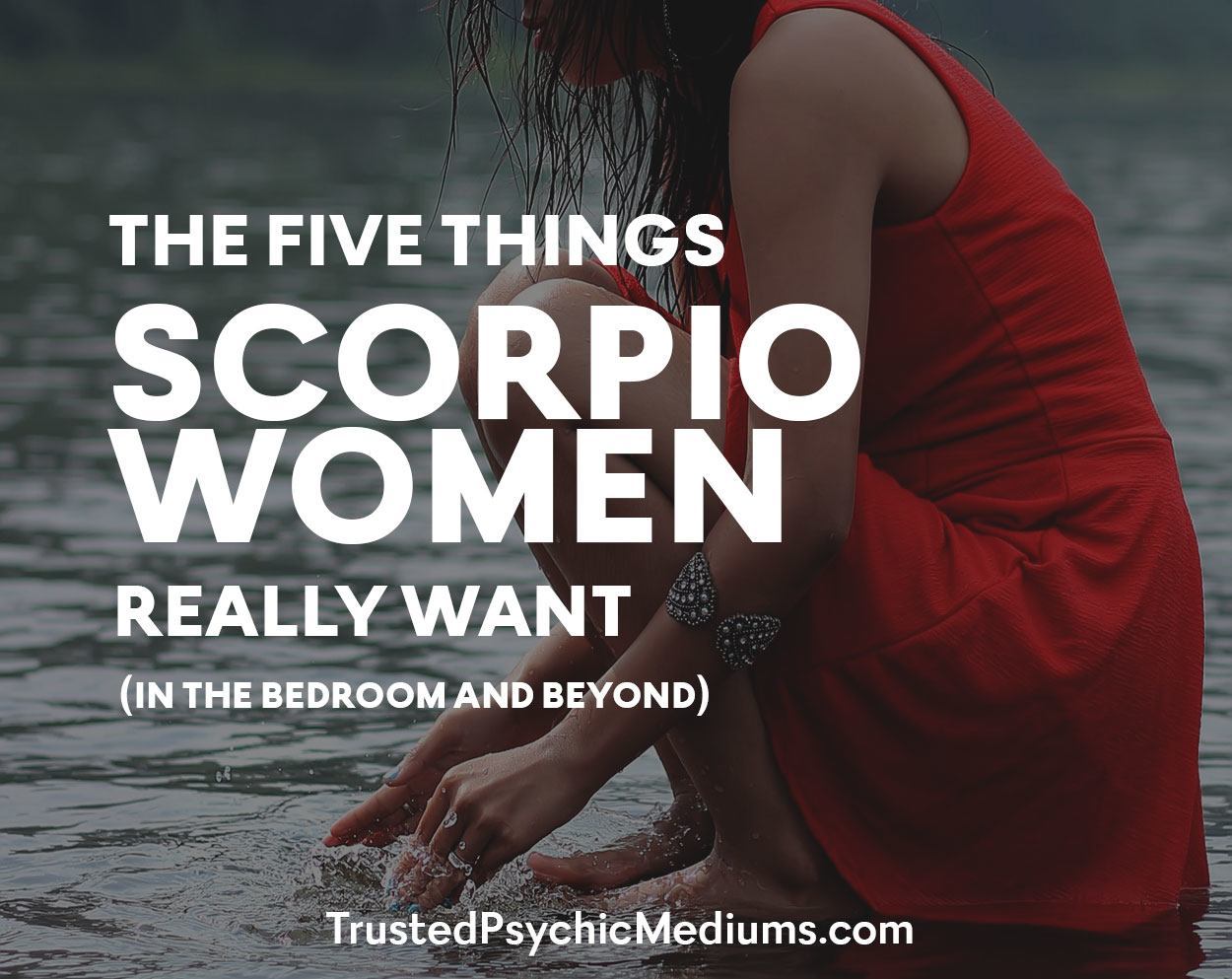 It’s very easy to think that Scorpio women are purely seductive. After all, they are probably the most seductive sign of the horoscope.

With that said, there’s a lot more to the Scorpio woman than her historical and stereotypical lovemaking appeal.

In fact, if you were going to unpack the Scorpio female personality, a lot of it centers on her emotions.

Scorpio women have a very strong emotional core. This explains their strong lovemaking appeal, inherent seductiveness, and expressive natures. This also explains many aspects of their lives like their career choices and views on the family.

If you want to truly understand a Scorpio, you need to zero in on that emotional core.

Knowing this pays off handsomely when it comes to pleasing your Scorpio female partner in bed.

What do Scorpio women really want?

Simple – it all boils down to matters of the heart.

If you’re able to wrap your mind around this, then you would go a long way in giving your Scorpio female partner what she wants “inside and outside the bedroom”.

Unfortunately, in this day and age, people find it hard to be truly emotionally honest with each other.

Heck, people have a tough enough time getting truly in touch with their feelings. Thanks to our modern schedules and oh-so-complicated modern identities, emotional bonding is quite a tall order for many people.

People find out quickly that it’s easy to say they can emotionally bond with that special person in their lives.

It’s one thing to say it. It’s another to actually do it.

They find it hard to give 100% to the relationship. They feel that they have to hold back at least half.

Why? People are afraid of getting hurt.

Scorpio women know the games that are being played. They recognize when somebody is holding back.

The very least that they demand and expect from you is a deep and profound emotional bonding. At the very least, be there fully, emotionally.

If you would try to understand the Scorpio personality and reduce it to two words, this would be it: emotional intensity.

You’re either with them or against them. This is what makes them tremendously loyal friends.

This is also what makes them implacable enemies. In fact, one of the worst things you can do is to cross a Scorpio. They can be very vindictive.

All this arises from the fact that they feel emotions on a completely different level than other people.

Since this is how they navigate the world, they expect this from their partners as well. In their minds, if they’re giving 100%, you better step up and do your share.

At the very least, give them the level of intensity that they’re looking for.

In some relationships, this is a deal killer. Some horoscope signs are generally cold fish when it comes to emotional matters.

If you want to keep that Scorpio woman, you need to step up the heat when it comes to emotional intensity.

The Scorpio woman isn’t as concerned about what you have to say as she is with whether you’re lying or not.

Regardless, she would rather accept that than have you play games with her.

If she finds out, you have hell to pay. That’s the way it is with Scorpio people in general.

This is especially true when it comes to the bedroom. Scorpio people understand that lovemaking is an intricate dance of both physicality and emotions.

If you are not being honest with your Scorpio partner, it’s going to show.

If you want to keep that Scorpio woman in your life, you need to be completely honest with her.

The best news is that even if you were to lay your soul bare to this person, you can trust her with your secrets.

Feeling That She’s Being Listened To

If you feel like you’re talking to a wall, then you’re not in a real relationship.

You don’t have to solve her problems. You just have to be there and actively listen. These are two totally different things.

Unfortunately, most guys think that a productive conversation involves them fixing their partner’s problems.

This isn’t always the case. In most cases, it’s not even possible.

You just need to be there and listen to her.

This means guiding her through what she’s saying. This means sending her signals that you empathize or you understand what she’s going through.

Feeling That You Fully Accept Her

Real love has to be grounded on full acceptance.

If you are in a relationship and you don’t fully accept the other person, you’re living a lie.

You’re just going through the motions. That’s not real love.

Scorpio people, being very emotionally intense people, truly get this. This is non-negotiable to them.

If you want to stay in a relationship with that Scorpio woman in your life, you need to make it clear to her that you fully accept her.